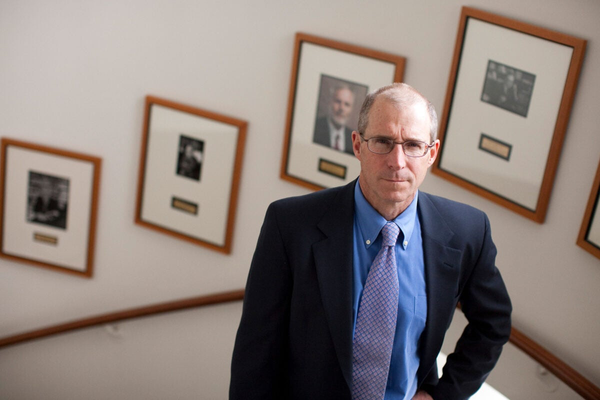 Professor James Stock is the Harold Hitchings Burbank Professor of Political Economy, Faculty of Arts and Sciences and member of the faculty at the Harvard Kennedy School. His work focuses on empirical macroeconomics, energy & environmental policy, and climate economics.​​ Under President Obama, Professor Stock handled climate policy on the Council of Economic Advisers.

Oftentimes, the public discourse on climate change assumes economic growth and tackling climate change are mutually exclusive when that’s not necessarily true. What role do you think economic policy will play in avoiding a climate catastrophe?

I think that economics has an incredibly important role to play in terms of shaping climate policy. The way I look at it is that we have a tremendous problem on our hands and we don't have any choice but to solve it. And it's going to cost a lot.  There's going to be a lot of money that we're going to spend to solve this problem by changing the entire energy system and doing lots of adaptation. And that means that, you know, we've got to spend the money as efficiently as possible.

The worst case scenario is we spend a few trillion dollars, and we don't solve the problem because we spent it poorly. We not only would have postponed solving the problem, but we also would have wasted a whole bunch of money and have less to solve the problem with in the future. So we need to be smart about how we do it and being smart about how we do it ultimately involves being thoughtful in terms of the economics of the issues.

Based on your research, what do you think are some of the ways that the climate crisis will affect the economy and economic growth in the future?

The honest answer is we don't know. First of all, if we don't do anything about climate change, then that’s clearly going to be bad for the overall economy. We are going to see more heat waves, deaths, fires, flooding, and sea level rise—all of which are going to cause a great deal of disruption and economic damage. Climate change costs us money. It’s going to cost us economic growth and jobs.

There's a fair amount of debate about what the effects of climate policy are, but there’s no extreme; there are arguments on either side. Some arguments point to the fact that the free market isn't solving but creating the climate problem, which goes to show that any changes we would make from current circumstances to solve the climate problem are going to be costly. There's a lot of logic to this argument. If it costs more to be green, then we're just going to have to spend money, but it will be an appropriate thing for us to do because what we're buying is preserving the planet.

The argument on the other side is that if you shift from the fossil fuel industry to the green technology industry, you're going to be opening up lots of new technological doors, and we don't really know where they're going to lead. But they could also produce a lot of jobs and have tremendous positive spillovers.

My view is that there's not a lot of good evidence on either side, so both arguments are rather speculative. We did take a look at carbon taxes and whether they affect economic growth. I recently published a paper that looked at carbon taxes in 15 countries in the European Union, and we found they had little effect. So when these countries imposed a carbon tax, it didn't seem to increase or decrease jobs—it just seemed to decrease emissions. The carbon tax didn't really seem to have any net economic effects. So I'm more or less of the view that our climate policies, if they're smart, aren't going to be costly. Of course, if they're dumb climate policies, then we could waste a lot of money and not solve the problem.

I think maybe one of the biggest revelations over the last five to eight years has been that some green technologies are emerging to be cheaper and in some places are cheaper than fossil fuel technologies. For places that either have good wind resources or good solar resources, it's going to be cheaper to do wind and solar than it is to generate electricity using natural gas or coal. It's also becoming cheaper to use green electricity, mainly through electric vehicles. Although electric vehicles are still relatively more expensive compared to internal combustion engines, their prices are dropping sharply. I think it's quite reasonable to expect that by the middle of this decade, we will achieve price parity between electric vehicles and internal combustion engines. Eventually, internal combustion engines will be more expensive. At that point, you wouldn’t need a policy telling people how to save money. By and large, people will want to save money and they'll want to do the cheaper thing.

I think this means that to a certain extent, developing economies are going to be able to piggyback on the work that’s being done by the developed economies and make it cheaper. And we're already seeing this in a lot of developed economies. While cars are an important source of transportation, electric motorbikes, and electric scooters are now becoming quite prevalent. These options are cheaper than using a gasoline powered vehicle. I think we might see this transition happen over the next 10 or 15 years.

Is this free market process where, through innovation and technological advancement, the price of green energy decreases relative to fossil fuels going to happen in time before we reach the point of no return? If not, are there things we can do to speed up the process?

There are certainly ways we can speed up that process. There's no question about that. For example, we could have very large government programs subsidizing innovation. One that comes to mind is aviation fuels. We really don't know, right now, what the right solution for decarbonizing the aviation sector by 2040 is. What we need to be doing now is a ton of research on different types of aviation fuels that can be used in different ways so that airplanes can travel while not emitting carbon. In other areas where we know what the technologies are, like wind, solar, and electric vehicles, I think the most effective thing we can do is support the markets to really demand more and more of these things so natural competitive forces can result in them becoming cheaper. However, we're still in a steep part of the learning curve and I think we're going to be here for quite a while.

What role do you think international institutions like the United Nations can play in incentivizing countries to take the climate crisis more seriously and make the investments necessary for innovation to occur?

First, I think it's useful to step back and think about the history of energy prices. 20 to 30 years ago, it seemed that it was more expensive to do anything green. Electric vehicles weren't a thing and they didn’t really become a thing until 1995. Historically, there’s been this view that it would be really expensive to address the climate crisis, but what we've seen is that technology has improved so much in so many areas. The old vision of international negotiations, which is forcing people or forcing countries to agree to do things that are really expensive for them, didn't work. Now, I'm not sure if it's quite as necessary because the new way to think about climate change is for developed economies to put the burden on themselves to make it cleaner to develop those technologies that are cheap so developing economies can go ahead and make this transition [and] save money at the same time. I make it sound very easy, but in practice, it's not that easy. When you think about it that way, the Paris Climate Accords becomes much more appealing because you've got everybody engaged in the same conversation and agreeing there’s a problem.  A lot of countries haven't really made very significant contributions, but at least they're at the table and they're in agreement.

While the burden falls on developed countries, it seems like, for example, in the United States there isn't the political will to tackle climate change. The US is currently going through multiple crises right now, such as rampant income inequality, that some believe are more pertinent. Are you worried that it's going to be too late when developed countries start acting?

Yeah. We have seen a lot of changes over the last even the last four or five years in terms of where the public debate has gone. Before, there were a lot more mainstream conservatives talking about the climate crisis being a hoax, but you just don't hear that anymore. And I think that the storms, the hurricanes, the wildfires, the heat waves, and droughts are making it clear that this isn't a hoax. This is happening. It's happening now.

I think that we'll come around politically. We'll come around to the need to make important changes. The problem is partly toxic politics and disinformation and partly that there are real people's jobs at stake. Some people have been mining coal for their families for decades and decades and decades. How are they going to make a living if the coal mines shut down? It's very frustrating, but we have to remember that there are real people involved.

Jolly is a staff writer for the Harvard International Review. She is primarily interested in African politics, society, and economic development.