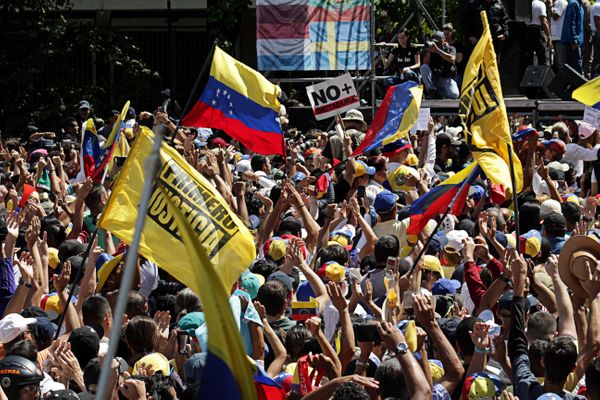 The International Response to the Venezuelan Presidency Crisis

Who is the president of Venezuela? The question seems straightforward, but a deep dive into the Venezuelan political landscape reveals just the opposite. Two political leaders — Juan Guaidó and Nicolás Maduro — have each laid claim to the presidency and are currently battling for domestic and international recognition of their authority. In response to the crisis, the US issued new sanctions on Venezuela that have the potential to worsen the already prevalent humanitarian crisis in the region.

This contest began when Guaidó announced that he would be president after Maduro’s re-election in May 2018. Maduro’s presidency had been characterized by a sharp economic downturn. He had inherited the rising debt and inflation left behind by the former president, Hugo Chavez, and could not save the sinking economy.

Given these circumstances, how was he able to win 68 percent of the vote during his re-election in 2018? The Maduro Party declared that if voters re-elected Maduro, they would receive aid and food subsidies. Furthermore, very few citizens turned out to vote because a large portion of the opposition advocated for boycotting the election. As a result, Maduro emerged victorious.

Maduro has adopted even more repressive tactics throughout his presidency. If a military official hears one of their peers criticizing the regime, they are required to report the situation. Any opposition activity is punished with torture and imprisonment.

These attacks on free speech and other fundamental human rights extend beyond the military. The government violently suppresses protestors and harrasses media outlets. According to Amnesty International, there were 8,292 extrajudicial executions from 2015 to 2017, and security officials committed 4,667 homicides in 2016.

As a result of these blatant abuses of power, over 50 countries have declared their support for Guaidó. The list includes many Latin American and European countries, as well as the United States and Argentina.

The US has taken strict measures to remove Maduro from office, but to no avail. President Trump sanctioned Venezuela in response to Maduro’s disregard for human rights. The set of sanctions issued in August let the Trump administration sanction Maduro’s supporters, and they placed a freeze on any of the assets that the Venezuelan government has in the US.

Companies are “likely to err on the side of caution and completely halt transactions relating to the Government of Venezuela,” noted Michelle Bachelet, the UN Human Rights Chief. Given that much of Venezuela’s economy relies on business with US markets, sanctions could entrench the economic crisis and worsen living conditions.

Since the sanctions seem to harm much of the population, why does the US continue to keep them in place? Some have argued that the sanctions are a component of Trump’s 2020 election strategy. He hopes to conjure the failures of Venezuelan socialism as indicative of a gloomy future led by the Democratic party.

However, the battle for the presidency also has broader geopolitical implications. While the US backs Guaidó, Russia continues to support Maduro in order to hedge back against US influence in Latin America and protect its loans and energy deals in Venezuela. Russia also fears that a US-backed regime change in Venezuela would greenlight future attempts to force regime change in Russia and its regional neighbors as well. Therefore, Putin is doing whatever is necessary to resist US influence while the US does the opposite.

Thus, the Maduro administration’s human rights abuses are not the only variable shaping the international response to the Venezuelan presidency crisis. Broader economic and geopolitical considerations also play a prominent role.

However, human rights should never be pawns on a geopolitical chessboard. Before intervening in another country’s domestic political arena, global leaders should carefully consider the material implications that their policies have on the local population.