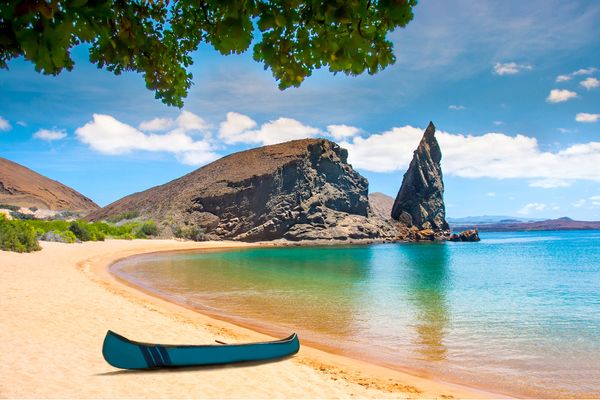 The Galápagos Islands: Economy over Ecosystems

Ecuador is hoping that a boom in the tourism industry will continue to serve as a pathway to a stronger economy, but could the plan be too ambitious? As the lower income Ecuadorians begin to prosper, more species are etched onto the endangered list. The Ecuadorian Government and caretakers of the Galapagos Islands have been stuck in a paradox of saving the economy over saving the ecosystem ever since tourism touched the islands. The Galapagos Islands serve as a major tourism point for the country of Ecuador. However, too much tourism may not only hurt the ecosystems of the irreplaceable islands, but also damage the income of native islanders as well as those impoverished on the mainland.

History of the Islands

Located on both sides of the equator about 600 miles from the shores of Ecuador, the archipelago of 19 islands is able to provide a special habitat to the diverse array of species. The location is able to inhabit unique species because it is the meeting point for three oceanic currents, creating a varying degree of warm and cold water that fosters rich and irreplaceable marine ecosystems. The animals on the islands have become endemic to their particular island due to isolation and inability to migrate. The 2,000 species that can not be found anywhere else in the world have been the island's claim to fame. Only five of the islands are inhabited by humans, while the other 14 are only accessible by guided tours.

The beauty of the islands was initially meant to be shared in small, environmentally friendly, doses. The Ecuadorian Government and natives of the islands worked together to implement ecotourism. Ecotourism promotes visitation while also conserving the natural land and species. Those who provide tours are supposed to abide by regulations provided through the Galapagos National Park Directorate (GNDP) and the Ecuadorian Ministry of Tourism. The majority of these regulations include basic commitments to incorporate local residents and their products while simultaneously minimizing waste production and optimizing water conservation. For example, the native tourism companies worked together to create a waste recycling station to minimize the pollution from the tourists that they welcome. Additionally, some companies have been working to incorporate hybrid boats that use solar panel systems to produce energy in order to minimize the amount of oil and gasoline used near the island shores.

Ecotourism has been developed and implemented across the archipelago in hopes of limiting human damage to the natural environment. However, these regulations are mainly targeted towards tourism coming from cruise ships, whereas land-based tourism has weaker regulations and mandates to abide by. The maritime laws and regulations are enforced with the help of the United States Coast Guard, so those traveling by sea or participating in water-based tourism are subject to stricter law enforcement. Land-based regulations are enforced through certified guides, so tourists abide by the regulations and laws that guides clarify. These Naturalist Guides have to take a well-developed course that is quite lengthy, and they are only allowed to even apply for the job if they are legal residents of the Galapagos Islands. However, these guides are only required for exploring the Galapagos National Park, not the areas of the islands that are completely open to the public.

The public spaces are where the tourism issues really are. Since these spaces are the only ones that allow construction, they are far more likely to become populated by the tourism industry. There are less protections in the public areas in order to allow individuals to construct hotels and foster economic growth for local tourism. Because of fewer regulations, land-based tourism jumped 92 percent in the amount of visitors while ship-based tourism decreased by 11 percent between 2007 and 2016.

In addition to lower income Ecuadorians moving to the islands to gain some income from tourism, new non-native tourist agencies began to spring up. The issue with these agencies is that they appeal to those who go to the islands for a tropical vacation which in return brings people to the Galapagos that pose a greater risk to the environment than eco-friendly tourists. To bring in the best profit, these agencies offer more “attraction based” activities on the sands of the Galapagos. These activities include: snorkeling, sport fishing, kayaking, and horseback riding — all of which have potential to severely damage the wildlife and ecosystem functionality of the islands.

Endangered species are at high risk of extinction in their own natural habitat because of improper practices of ecotourism. Ships that are not properly managed may contaminate the seawater with engine oil and paint flecks, which produces the concern of contamination of the ocean and drinking water supplies on the islands. In combination with the oil spill from 2001, the marine life that has survived for thousands of years without human intervention is nearing extinction. There are already a slew of marine species that are endangered — the Galapagos shark, Galapagos penguin, Galapagos fur seal, and Floreana coral — just to name a few. These species are only found near the islands, much like other inhabitants, these species cannot be found anywhere else in the world. This is why it is important to maintain the ships that come in and out of the Galapagos Islands while monitoring the oil exchanges that happen anywhere near them, without caution there can be immediate disaster.

The islands have also been faced with invasive species, plastic pollution and rapid population growth, alerting the government and other NGOs to step in. The government enacted the Galapagos Special Law in 1998 to establish the Galapagos Marine Reserve (GMR) as well as implement protections and regulations for the islands. These regulations included restrictions to immigration, new inspections and quarantining systems for new arrivals, and other types of ecosystem protections. The main source of regulation suggestions and other types of eco-friendly policies come from UNESCO, since the Galapagos have been deemed a World Heritage Site.

The NGOs step in where the Ecuadorian government lacks. The purpose of the main NGOs on the island is to play a technical advisory role to the Government of Ecuador. These organizations work to oversee certain government initiatives and also work to make sure that management of the Galapagos and the surrounding waters run smoothly. The Galapagos Conservancy is a US-based nonprofit that works closely with the Charles Darwin Foundation to save endangered species, increase sustainability, and educate people who live on and visit the islands.

Even with the government regulations in place and NGOs working alongside them, the tourism industry makes it difficult for them to effectively implement change. The Galapagos Conservancy report reflects the concerns of UNESCO in the sense that tourism is just growing at too high a rate for the environment to keep up with. Since the government has refused to implement some crucial changes that could limit the tourism industry, the ecosystems and natives suffer the cost.

If Ecuador and the people of the Galapagos Islands wanted to ensure safety of the native species, they would leave the islands untouched, but given that they serve as a gateway out of poverty for so many on the mainland, it is difficult to hope for that change. Before the pandemic, tourism amassed about 80 percent of the Galapagos economy, serving as Ecuador’s largest service export and fourth-largest non petroleum export. The country is dependent on the profitability of the islands, especially the actual natives of the Galapagos.

The tourism industry is the largest employer on the Galapagos Islands. These people make their living by either participating in the actual tourism agencies or selling their products to tourists. This benefits not only those on the Galapagos islands, but also those living in extreme poverty in Ecuador. When there is a 10 percent increase in international tourism, economic growth is recorded for almost 31 percent of the lower income population.

With a US $10 million increase in the tourism industry, the country’s economy will see a US $23 million increase overall. From this increase, the lowest income populations will experience an increase in their wages, proving that tourism development is an effective way to reduce poverty. Urban households are disproportionately benefiting from about 80 percent of this growth whereas the rural population does not see nearly the same amount of benefits. Although tourism has been helping with mainland poverty, the government could work to implement rural-based redistributions in order to aid lower income families across the nation.

The wealth production from tourism is also the most stable source of income for the country. Although the islands were hit hard with the pandemic, they have seen a steady incline back to their expected annual revenue since then. Compared to tangible goods that are exported, revenue from services is much higher. This is due to the uniqueness and lack of competition from what the islands are able to provide. Although Ecuador also exports several agricultural products, the experience of the Galapagos may not be exported or replicated, allowing the tourism industry to demand higher prices for their products and services.

However, from 2006 to 2017, over 200 hotels were built on the island which has led to a major drop in prices with budget-friendly rates. This competition from outside companies has decreased natives' ability to fully profit from the tourism industry. With both the migration and tourist population increasing as living space becomes more affordable, the locals of the island are not always able to keep up with the demand of the ever growing population. The competition at hand then results in overall lower income for natives working in the tourism industry.

The economic and ecological paradox is not only fueled by the tourism contributions to the economy, but also to the amount of money that must be reinvested into the protection of the islands. Government agencies and NGOs have been trying to work together to combat these issues, but they are unable to find sufficient funds for their projects. Although the tourism industry racks up about US $200 million a year in revenue, about US $86 million is used to remove invasive species alone. The agencies must find money to support their waste collection programs, hybrid transportation, and other ecotourism projects while ensuring locals still profit from their businesses.

The Galapagos Islands generate a large amount of revenue for both themselves and the overall economy of Ecuador, but the ecosystems are put at risk. Without the biodiversity and uniqueness of the islands, there is a lack of a tourist attraction. Too rapid of tourism growth can lead to the downfall of locals' income. Since the economy is so dependent on tourism, it is important to care for the islands and encourage native-based tourism. There are international agencies as well as local conservation agencies working to help the environment of the Galapagos Islands, but they have been unsuccessful at tackling every problem the tourism industry throws their way. The National Parks services and the conservation agencies need to work together to find a way that will actually implement effective ecotourism which would allow the economy to benefit while sustaining the unique wildlife of the Galapagos.