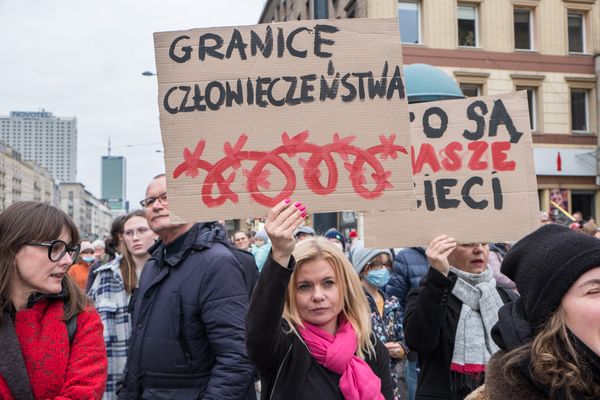 Once heavily criticized by members of the EU for threatening the independence of the judiciary, implementing state control over the media, passing bans on abortions, and sponsoring a state-led anti-LGBTQ+ campaign, Poland seems to be working towards getting on the good side of the bloc again, this time by pushing back against refugees at its eastern border. Yet Poland’s approach to immigrants has not been universally welcomed. Heavily armed soldiers, barbed wire, lasers, bonfires, and plumes of smoke—in recent months, photos from the chaos on the Belarus-Poland border have been plastered onto the front pages of the world’s largest media outlets. The region seems to have turned the world’s attention to how not to handle a refugee crisis. The situation has shed light on domestic political polarization and the decaying relationship between the state and media in Poland, demonstrating the dangers of exploiting public opinion for political means.

For Poland, which sits on the outermost edge of the EU, the border showdown has played out in the most dramatic way possible. Overwhelmed with the growing number of border crossings by Iraqi Kurds and Syrians, the Polish government declared a state of emergency in 183 localities near the Belarusian border, barred journalists from accessing the region, and deployed over 20,000 soldiers to guard the strategically important area where the EU's eastern border separates Poland from an increasingly hostile Russia and Belarus.

Both the Polish and Belarusian governments have been criticized for their responses to the soaring crisis. For one, Belarusian president Alexander Lukashenko is widely considered to be the perpetrator of the problem. The conventional view adopted by the EU is that the border showdown was artificially created by Lukashenko in response to the sanctions that the EU implemented against Belarus in summer this year. Promising to introduce “human traffickers, drug smugglers, and armed migrants” to Europe, Lukashenko’s geopolitical strategy included granting an excessive number of visas to Belarus; increasing the frequency of flights from Baghdad, Erbil, Basra, and Damascus to Minsk; and busing migrants to the Belarus-Poland border. Faced with this aggressive strategy from Belarus, Poland, on the other hand, has been heavily scrutinized for its treatment of migrants at the border, with some arguing that it violates international law with its army-led efforts to secure the border that have left many asylum seekers dead.

For conservative politicians in Warsaw, however, Lukashenko’s power moves have proven an opportunity for political gain. On November 16, the Polish National Bank issued a special coin to mark the “defense of the eastern border,” and the annual right-wing Independence Day march took an unsurprising xenophobic turn in a cry of support for the government’s pushback against asylum seekers at the border.

Out of line with previous bloc-wide sentiment, the German Minister of the Interior Horst Seehofer thanked Poland for “protecting the EU’s eastern border,” and both the President of the European Commission Ursula von der Leyen and the President of the European Council Charles Michel offered “solidarity” to Poland amidst the worsening humanitarian situation at the border. Analysts and scholars have criticized this sudden friendliness toward Poland as inconsistent with previous attempts to make Poland the main pariah of the leadership of the EU.

This criticism is based on concerns over Poland’s political trajectory for the past few years. Allowing Poland’s reintegration back into the bloc at a time when the country has been expelled from European judicial network, fined one million euros a day for obstructing the independence of its courts, and experienced withholding of funds from regions where “LGBT-free” zones have been established seems to signal to the Polish government that, even in the light of unprecedented threats to the core values of the EU, Poland can exploit its momentary geopolitical position for its own good.

With 54 percent of Poles supporting the government’s measures, and 53 percent criticizing the Polish opposition’s attitude toward the deteriorating situation at the border, Poland’s far-right party, PiS (Law and Justice), has accumulated substantial support to reign freely with its anti-migrant rhetoric that once helped the party gain a majority in national elections.

Using xenophobia as one of the pillars for its political platform, PiS has long used anti-refugee sentiments to consolidate power. Claiming that migrants from the Middle East might “bring parasites and diseases to Poland,” exploiting growing anti-refugee attitudes, and disseminating the widespread belief that Poland should support “Christian civilization,” PiS performed extremely well in the 2015 parliamentary elections. While Poles have historically held some of the most pro-immigration views in Europe, by June 2018—after almost three years of PiS in power­—72 percent of Poles opposed relocation of refugees to Poland from other EU countries.

Media and the State

With a steadily dropping approval rating, PiS has been presented with another opportunity to showcase itself as a political strongman by taking a tough stance at the border. Demonizing the opposition for its meek stance has proved to be an effective strategy, given the government’s control over media outlets and the largely liberal and humanitarian attitudes of opposition MPs who have occasionally gone to the border themselves to distribute aid to asylum seekers.

There is no doubt that for ordinary Poles, whose information landscape has been largely constrained by state-controlled media, statements like “the opposition is supporting migrants and Lukashenko” provide a false image of the efficiency with which the PiS-led government is containing the crisis. Polish Prime Minister Mariusz Morawiecki even criticized the reliance of independent media outlets on information coming from Belarusian authorities, while simultaneously barring journalists from accessing the border.

In a country where independent media has long been under an existential threat, the border crisis is unfolding through the eyes of state-controlled public broadcasters and the authorities themselves. With another opportunity to further centralize the media landscape in Poland by demonizing independent journalism as seemingly anti-Polish, the Polish government is exploiting the crisis for its own benefit.

Combined with the largely anti-migrant sentiment embodied by the PiS electorate, the border crisis serves the additional role as a diversion from other unpopular moves by the government, such as the recent abortion ban, and as a refocus on the “rule of law” the government is currently trying to establish at the border.

While PiS may be successful in its efforts to shape the public perception of the border, it clearly holds ulterior motives in the process of doing so. It is very much in the ideological interests of the PiS-led government to have a migrant crisis unfold on the country’s borders, since it maximizes their ability to promulgate their anti-migrant rhetoric. Reestablishing popular support by consolidating conservative votes in the upcoming elections in 2023 could be a viable electoral strategy for PiS to usurp growing political anxiety and divides that have once again resurfaced as a result of the border showdown.

It is, however, up to civil society itself to see through the party’s limited information stream. With ever-increasing threats to media freedom, NGOs being barred from monitoring the situation at the border, and even the Catholic church being denied access to provide help to asylum seekers, the reality may prove much more troubling than the government is willing to admit.

By restricting media access to the border and solely relying on state-controlled media for disseminating information about the crisis to Poles, PiS has successfully crafted an informational vacuum within which independent media outlets hold a marginal role in shaping how news about the ongoing developments at the border reach voters. While this practice is consistent with the government’s treatment of media in the past, the growing emphasis on state broadcasters in relying information from the Belarus-Poland border and outright bans on journalists from covering the border seem to further signal the government’s lack of control over the crisis at a time when Poles’ trust in public broadcasting has reached a record low.

What the Future Holds

It is clear that PiS is trying to showcase the vulnerabilities of the opposition while highlighting the government's own ability to deal with the crisis at the border. Restricted media access, state-sponsored propaganda, demonization of the opposition and refugees, and divisions among Poles all seem to provide the perfect recipe for PiS to maintain political control in 2023. The slow restoration of ties with the EU as a result of the building geopolitical pressure between the EU and Belarus also points in the way of Poland returning to its former central position within the bloc—a departure from the country’s recent pariah status.

Poland is undeniably gaining EU leadership favor as a result of the border crisis. Six years of PiS rule has further reinvigorated Polish civil society and the people's trust in democratic institutions amid rising threats of authoritarianism. But the global community should still be wary about EU leadership's sudden turn in rhetoric toward Poland considering the rocky relationship between the Polish government and the bloc post-2015. While considerable security concerns and national defense issues arising from the crisis have both bridged the gap between the EU and Poland in the past few weeks, the health of the Polish democracy is still decaying—and recent events only seem to be accelerating the process.

Ricards Umbrasko is an Executive Content Editor at the HIR. Born and raised in Latvia, he is interested in Eastern European politics, culture, civil society, and social inequality in the region.