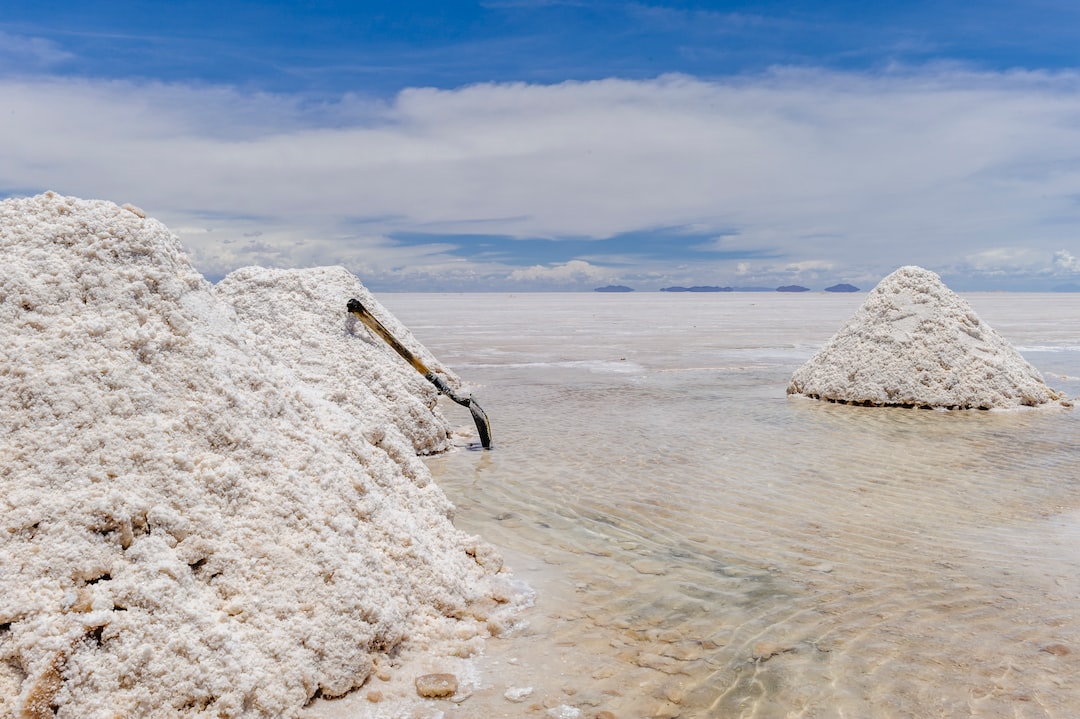 The Lithium Triangle: Where Chile, Argentina, and Bolivia Meet

The lightest of metals may be causing the largest of impacts. Lithium, which powers our phones, laptops, and electric cars, is essential to our battery-driven world. The demand for lithium has rapidly increased, as the global market’s annual consumption has risen by 8.9 percent annually. This demand will only intensify as hybrid and electric vehicles, energy storage systems, and portable electronics become increasingly widespread. While lithium has been found on each of the six inhabited continents, Chile, Argentina, and Bolivia—together referred to as the “Lithium Triangle”—hold more than 75 percent of the world’s supply beneath their salt flats.

The Lithium Triangle is one of the driest places on earth, which complicates the process of lithium extraction: miners have to drill holes in the salt flats to pump salty, mineral-rich brine to the surface. They then let the water evaporate for months at a time, forming a mixture of potassium, manganese, borax, and lithium salts that is then filtered and left to evaporate once more. After between 12 and 18 months, the filtering process is complete and lithium carbonate can be extracted.

While lithium extraction is relatively cheap and effective, it begs the question of sustainability and long-term impact. That is to say, will lithium mining benefit the globe and its inhabitants, or will it entrench societal and environmental harm? Perhaps the Lithium Triangle will provide some answers.

Economic and Social Factors at Play

Bolivia is home to Salar de Uyuni, the world’s largest salt flat that spans 4,000 square miles. Beneath this natural wonder are massive lithium deposits, composing about 50 percent of the earth’s total. In 2008, the vice president of Bolivia, Álvaro García Linera, proclaimed that this natural resource would relieve the 40 percent of citizens who are living in extreme poverty by “training them in scientific and technological fields so that they become part of the intelligentsia in the global economy.” This sentiment was echoed through government policy and action, with the impassioned declaration of “¡100 percent Estatal!”, or full control by the Bolivian state of the lithium extraction that would occur in Salar de Uyuni.

However, these ideals have yet to come to fruition. Bolivia may be rich in natural resources, but it is a very poor nation, which makes the prospects of autonomously operating lithium-mining projects slim. Lithium mining requires significant financial and technological investments, and no foreign firm was willing to cede control if it was to make those investments. It was not until 2018 that Bolivia found a partner. ACI Systems Alemania, a German firm, formed a joint venture with the Bolivian government and planned an investment of US$1.3 billion for the industrial use of lithium.

This joint business venture, however, has not appeared to take the form of a true partnership, and has certainly not been what García Linera envisioned. The local population is not reaping the benefits of the work that is being done near their homes. There have been few jobs offered to unskilled, indigenous workers, let alone well-paid jobs. These concerns have built up to recent protests in the city of Potosí—where Salar de Uyuni is located—which are demanding higher royalties and a greater allocation of the revenue from lithium mining. On November 3, 2019, the government rescinded the legislation that established the joint venture with ACI Systems Alemania. This experience parallels how Bolivia was similarly once positioned as a major owner of natural gas reserves, but lost any potential profit to foreign exploitation. Official statements from the government have been lacking, but what is known is that Latin America’s poorest nation has little to gain through agreements that sign away its mineral rights to foreign firms in pursuit of quick but fleeting profits.

In Argentina, a similar story unfolds. Beneath the ancestral land of the indigenous Atacamas lie lithium stockpiles worth billions of dollars which have attracted the attention of mining companies for years. One such company, a joint Canadian-Chilean venture called Minera Exar, has made an agreement with six indigenous communities, with expected sales of US$250 million a year. Minera Exar originally established that each community would receive an annual payment ranging from US$9,000 to US$60,000, but testimonies from local residents complicate that picture. Luisa Jorge, a resident and leader in Susques, said “lithium companies are taking millions of dollars from our lands… they ought to give something back. But they’re not.”

Local residents should not be struggling to pay for sewage systems and adequate resources while distant firms profit off of their natural resources. Revision to the legal framework that governs lithium mining is essential, as the current system privileges the interests and whims of companies like Minera Exar. While the provincial government in Argentina has control over mineral rights, the Atacamas have legal rights of their own. However, those rights have been undercut by the present lack of a formal process for negotiations between local communities and mining companies. As such, the interests of mining companies are ultimately overrepresented in the contracts, with leaders of local communities left unaware of how much money and support they should expect to receive. This process is emblematic of a broader legacy of exploitation in Latin America, and in need of urgent reform. Such reform would not be unprecedented, as Argentina has previously adopted international standards to ensure that indigenous communities “shall wherever possible participate in the benefits of such activities, and shall receive fair compensation for any damages which they may sustain as a result of such activities.”

Investments in lithium mining should not be universally rejected. Sales de Jujuy, a mining company that operates directly within Argentina, extracts lithium from the Olaroz salt flat and has explicitly identified the goal of fostering mutually beneficial and understanding partnerships with localities, evident in the fact that 65 percent of its employees are from indigenous communities. Those employees are paid about US$1000 a month, which is an above average salary for the region and an overall satisfactory salary for the nation. Additionally, Sales de Jujuy has provided medical and dental services and made microloans to support health and innovation among local residents. Lithium mining, then, does have the potential to lift up communities it interacts with, but this can only be the case if companies respect and prioritize local conditions and voices, which has so far proven to be the exception rather than the rule.

Lithium extraction in Bolivia, Argentina, and Chile requires significant amounts of water, at approximately 500,000 gallons per ton of lithium. In Chile’s Salar de Atacama, lithium extraction being performed by various companies has consumed 65 percent of the region’s water supply. This has not only created extreme water shortages, but has also had a substantial impact on the abilities of local farmers to grow crops and maintain livestock.

An additional environmental impact of lithium mining is that it harms soil and contaminates the air and the already limited water supply. In Tibet, for example, Chinese lithium mining has leaked chemicals like hydrochloric acid into the Liqi River, which resulted in the poisoning of fish and the killing of livestock. Similar consequences are being seen within the Lithium Triangle already. In Chile, local inhabitants have criticized mining companies for polluting their waters and covering their landscapes in blankets of discarded salt. In Argentina, natives of the Salta and Catamarca provinces have alleged that the operations of lithium mining companies have contaminated the streams that are used by humans and livestock and for the purposes of crop irrigation.

However, advocates of lithium mining maintain that lithium-ion batteries are essential in the fight against the adverse effects of global warming. The rechargeable battery has a relatively high power density that enables it to store more energy for longer periods of time. Electric automakers like Tesla are pushing drivers to adopt clean, battery-powered replacements for combustion engines. More electric cars on the road would be a powerful way to combat climate change by producing fewer greenhouse gases and emissions. The Department of Energy estimates that the carbon pollution of electric vehicles is 60 percent lower than that of gasoline-powered cars. In a clean-energy state like California, it would be 80 percent lower.

Saving the planet, however, should not come at the cost of destroying fragile ecosystems. Lithium mining cannot be considered a long-term or just solution if it contributes to water depletion and air pollution, which have severe and disparate impacts for local communities that are already struggling in many ways to make ends meet.

Lithium mining is in need of much reform if it is to be universally beneficial as a practice. The biggest players in lithium mining must commit to principles of transparency and cooperation with the local governments of the Lithium Triangle. Chile, Argentina, and Bolivia could lead efforts in researching and organizing data that sheds light on the impacts of mining and extraction. Progress has already been made on that front, as in Chile, the Atacama People’s Council has set up monitoring stations in a lagoon on its salt flat in order to track changing water levels. Further developments can and should be made in that regard to ensure that the green revolution does not endanger the people and environments it promises to protect.