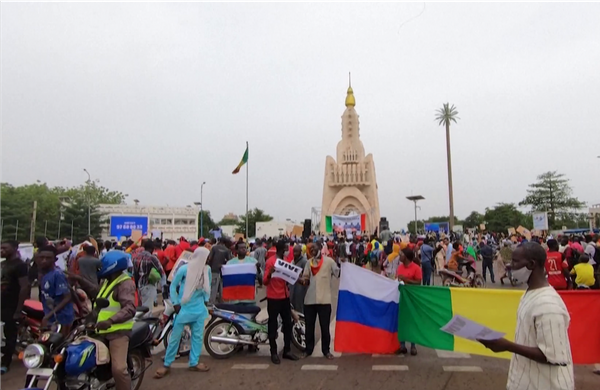 Among jubilant shouts celebrating the military takeover of Burkina Faso by national armed forces on January 23, 2020, cries of “long live Russia” rang out above the cheering crowd flooding the streets of Ouagadougou. Meanwhile, the burned Tricolore - the French flag - lay trampled under their feet.

Contrary to the expectation of swift and decisive military action in the Sahel –– a 3,860-kilometer landmass lying to the immediate south of the Sahara Desert and stretching east-west across the breadth of the African continent –– France's presence in the region has been messy and drawn out. Frustration at their ineffectiveness has led to faltering public support for the former colonial power as people stake their hopes on another, perhaps more aggressive, power: Russia.

How did we get here?

Across the Sahel, terror marks the last decade and a half, as insurgent groups expanded throughout the region. Factors including intergroup fighting, poverty, and weak states all contributed to structural fragility in the Sahel. The metastasis of jihadist groups, like the Islamic State in the Greater Sahara (IGSA) and Jama’at Nasr al-Islam wal Muslimin, resulted from this instability. When Mali called for help in 2013, former colonial power France eagerly swept in.

After a quick initial success through Operation Serval, which saw the complete recapture of Islamist-held territory between January 2013 and July 2014, France transitioned to Operation Barkhane. This counter-terrorism effort consisted of 3000 troops operating out of permanent bases in Chad, Mali, and Niger. Fast forward nine years and France’s involvement, initially expected to last three weeks, has evolved into a long and drawn-out struggle against insurgent forces. Enmeshing itself in Burkina Faso, Mali, and Niger, France’s troops swelled to  5100 in the region by the end of 2020.

Other countries have also gotten involved, including hundreds of troops from Estonia and the Czech Republic as part of a special-forces mission called Takuba. Further, upwards of thirteen thousand Blue Helmets, the UN’s peacekeeping force, patrol Mali and over a thousand American soldiers and drones are in the region.

Despite these efforts, the strength of the jihadists in the Sahel continues to grow, expanding from northern Mali into its center and across Niger and Burkina Faso. Also threatened are coastal states like Benin and the Ivory Coast. As terrorist groups have seen success and security, the Malian junta  exploits France’s nonperformance with Operation Barkhane to undercut French standing in the public eye. Russian social-media campaigns  further exacerbate this, and by 2021 a staggering 45% of Malians believed that France was in league with terrorists and separatists. Only a third reported any satisfaction with Operation Barkhane.

Coups in the Sahel

The turmoil plaguing the region has unfolded a rapid series of putsches as military strongmen have attempted to seize power. Coups in Chad, Guinea, Sudan, and Burkina Faso mark a quadrupling in coups in 2021, following Mali in 2020. Not to mention foiled attempts at military takeover in Madagascar, Central African Republic, and Niger in the same year. These statistics, not so high since the 1980s, mark a distinct change from the last three decades when there was only about one coup per year.

The more than 114 million people now under junta rule respond in varying ways to the soldiers who illegally seized power. Pro-putsch rallies and talk of liberation followed the takeovers of Mali, Guinea, and Burkina Faso. However, celebration was quick to be replaced by fear for the future. Other countries, like Sudan, witnessed public outrage since the beginning of military rule.

Since the coup in Mali, relations between France and the new military leaders rapidly broken down. In February of 2022, with only 72 hours for the French ambassador to leave Malian soil, France announced the withdrawal of its troops. The exit of France may be seen as a success by the region’s jihadist groups, who demand the withdrawal of foreign forces. Malian military rulers can also capitalize on anti-France rhetoric to gain the favor of the Malian public. French President Emmanuel Macron characterized the end of their anti-terrorist operations as a “coordinated withdrawal;” in reality, it marked the boiling point of tension between the two governments.

The disintegration of antiterrorism operations headed by France and Western allies leaves room for newcomers to the region, namely Russia. Already the largest arms supplier to sub-Saharan Africa for the last two decades, Russia is a dominant presence in the Central African Republic and has intervened to varying extents in Libya, Sudan, and Nigeria.

The Malian government recently employed 1000 Russian paramilitaries from the Wagner Group, Kremlin-linked mercernaries, to aid anti-terrorist efforts at a cost of 10,000,000 US per month. Burkina Faso is also also has its eye on hiring the group as pro-Russian social media campaigns leverage frustration at France’s inefficacy to stoke support for Russia as a stronger alternative.

However, Russia is more concerned with asserting control in the territory than with the fight against terrorism. The presence of the Wagner Group, in particular, is concerning due to their history of extrajudicial killings, torture, and sexual violence in the Central African Republic. In December, it made Russian a compulsory language for university students in Bangui, the capital of CAR. The Wagner Group, though officially an independent organization, has been accused of acting on behalf of Moscow. It is considered close to Russian President Putin, whose incentives for acting in the region diametrically diverge from those of the countries calling for their involvement. According to the International Crisis Group, Russia has “no interest in helping Africa become more peaceful or democratic. A key aim is to stick it to the West.”

The EU warned that engaging Wagner would harm their collaboration, specifically on the European Union Training Mission in Mali (EUTM Mali), which employs peacekeepers to train Malian troops. Further, becoming friendly with Russian troops will alienate countries in the Sahel from western powers. Germany has reported it will reconsider its deployment of troops in the country due to the mercenary group’s presence.

Capitalizing on the Sahel’s growing frustration with the West, Russia, which sees Africa as a source of valuable natural resources and a vehicle for global expansion, will only undermine democracy and destabilize the region further in service to its own global ambitions. Their playbook in Africa mimics their strategies in Syria, which emphasize strong authoritarian rule as the best antidote to insurgents. Not only does this necessarily undermine democracy, but it also allows Russia stronger control on the African continent.

The democratic backsliding in the Sahel can be credited in part to the lack of decisive and unified efforts by western democratic powers. For example, coups in Niger in both 1999 and 2010 resulted in  drastic cuts in international aid, forcing them to capitulate. The lack of unified effort in facing affronts to democracy in the region and around the globe could stem from an increasing polarization and incohesion inside the borders of democratic countries themselves. With democracies preoccupied with their struggle to sort themselves out, power-hungry actors are more confident in their own blatant show of autocratic ambition. The corruption that once would at least pay lip service to democracy is now unafraid to brazenly show its colors.

Western countries, like France, can learn many lessons  from how things have unfolded. A failure to work with local institutions because of an ideological dislike of governance mechanisms can backfire. There must be greater respect for local actors and a willingness to act constructively rather than tightly controlling development aid and undermining local institutions. Further, western countries must realize there are heavy consequences to ditching security efforts - simply moving out leaves behind instability and room for nefarious actors like Russia.

Cover photo: Demonstration of support for the military, in Bamako after the 2021 coup in 30 May 2021. Photo by VOA Bambara, accessed via Wikimedia Commons.