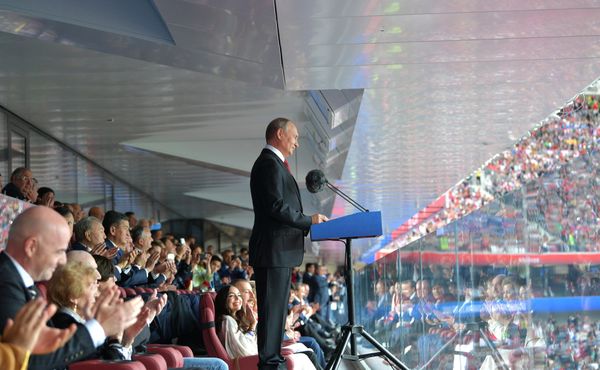 Western nations and organizations alike have presented a near-united front in condemning Russia for its actions. Dozens of companies affiliated with the West and its allies have changed their business relationships with Russia, reflecting widespread disapproval of the country’s actions in Ukraine. Economic sanctions and anger from the United Nations and other international political organizations, however, are not the only backlash Russia is facing. A raft of non-political organizations have taken the unusual step of positioning themselves against the Russian Federation—notably, athletic associations.

International sports are no stranger to being the battle ground of politics. The US-led 1980 boycott of the Olympic Games in Moscow in protest of the Soviet invasion of Afghanistan—and the subsequent Soviet-led boycott of the 1984 edition held in Los Angeles–are notable examples. However, these situations were largely a result of political action by competitors and attendees, not the organizations that sponsored them. For instance, in 1980, the International Olympic Committee (IOC) refused President Jimmy Carter’s request to move the venue from the USSR on the grounds of apoliticism, leading to a boycott.

The recent Russian invasion of Ukraine has once again thrust international organizations like World Athletics, the governing body of professional running, and FIFA, the world’s governing soccer body, firmly into the limelight of geopolitics. With the war in Ukraine threatening to restore old global tensions, these organizations are breaking with their traditional neutral position to align themselves with NATO and its allies. While the organizations under these umbrella bodies and the sporting events they participate in have previously been the venue for political expression by competitors, the governing bodies themselves are now becoming politically active.

In previous periods of international crisis, athletic governing bodies have generally remained silent or only begrudgingly sanctioned member states. At the Olympics, the biggest stage for global athletics, it is highly unusual for a state to receive as many sanctions as Russia has. South Africa missed Olympiads from 1964 until the end of the apartheid government in 1994 due to international outrage over the country’s segregated athlete qualification system, but the IOC was extremely reluctant to do so. Yugoslavia, then comprising Serbia and Montenegro, was similarly banned by the IOC and all of its child organizations as a result of a UN resolution that prohibited its participation in international sports of any kind. For Yugoslavia, athletes were permitted to compete under the neutral Olympic flag, a mercy also extended to some Russian athletes in the wake of its 2014 doping scandal.

But Russia’s recent military actions have challenged this commitment to neutrality. The IOC, the highest body of international athletics, asked member states to avoid competitions in Belarus or Russia, and went as far as calling for a total ban on Russian athletes and officials in all events. World Athletics outright banned Russian athletes from all events. Even FIFA, soccer’s notoriously corrupt organization that frequently overlooks member states’ poor behavior, barred Russia from participating in qualifying matches for the upcoming 2022 World Cup in Qatar, effectively banning the country’s national team from a tournament that Russia hosted in 2018. UEFA—the European regional derivative of FIFA—also moved the final of the Champions League, the biggest annual sporting event in soccer, from Moscow to Paris. The organization also removed Russian clubs from UEFA competitions. They are not alone. Russian and often Belarussian athletes are also facing sanctions from the governing bodies of skating, tennis, basketball, and skiing, to varying degrees.

Perhaps most personal to the Russian Federation, the International Chess Federation (FIDE), put harsh sanctions on Russia, pulling a major tournament from the country and suspending Sergey Karjakin, a Russian grandmaster who spoke out in favor of the invasion. Russia’s chess program is rated the highest in the world, and the country considers the game a point of national pride, making these sanctions particularly crippling. A similarly painful ban came from the International Ice Hockey Federation, which ejected Russia and Belarus from tournaments across all age groups, cutting off Russia from a treasured sport.

The actions of these organizations may not have the same tangible effects as economic sanctions, but they are evidence that the world–or a certain part of it–is quickly and sharply turning away from both Russia and the notion of an apolitical international landscape. The IOC, for example, has long been reluctant to condone political expression at its events–although it generally relies on member Olympic Committees to enforce suspensions–making its treatment of Russia a notable departure for the organization. International sports have never been free of political drama, just see the Black power salute protest at the 1968 Olympics, but generally it is the contestants making statements and picking sides, not the governing bodies. In the case of the 1968 protest, even this was deemed too political, with the athletes being expelled from the Olympic Village. With Russia, this historical trend has turned tides, irreversibly politicizing these sports for the future.

"The IOC, the highest body of international athletics, asked member states to avoid competitions in Belarus or Russia, and went as far as calling for a total ban on Russian athletes and officials in all events."

Opposition to the war in Ukraine is widespread among the West and its allies, but by no means universal in its strength. Some countries may feel uncomfortable with this international pressure. China, who hosted the Winter Olympics as Russia prepared to invade, has remained reluctant to make a statement on the war. Qatar, host of the 2022 FIFA World Cup, has pointed out that humanitarian responses for Ukraine have been much better than in the Middle East. Other Middle Eastern states, who have an increasing role as venues and financiers of high-profile events, have been similarly tepid on the issue.

This is what makes the firm response of sports organizations so unprecedented. By putting themselves firmly in the Western camp, these organizations, which are usually bastions of international cooperation, are threatening to tarnish their neutral reputation.

Cover image: Russian President Vladimir Putin speaking at the opening ceremony of the 2018 FIFA World Cup in Russia. Photo by the Kremlin, accessed via Wikimedia Commons.