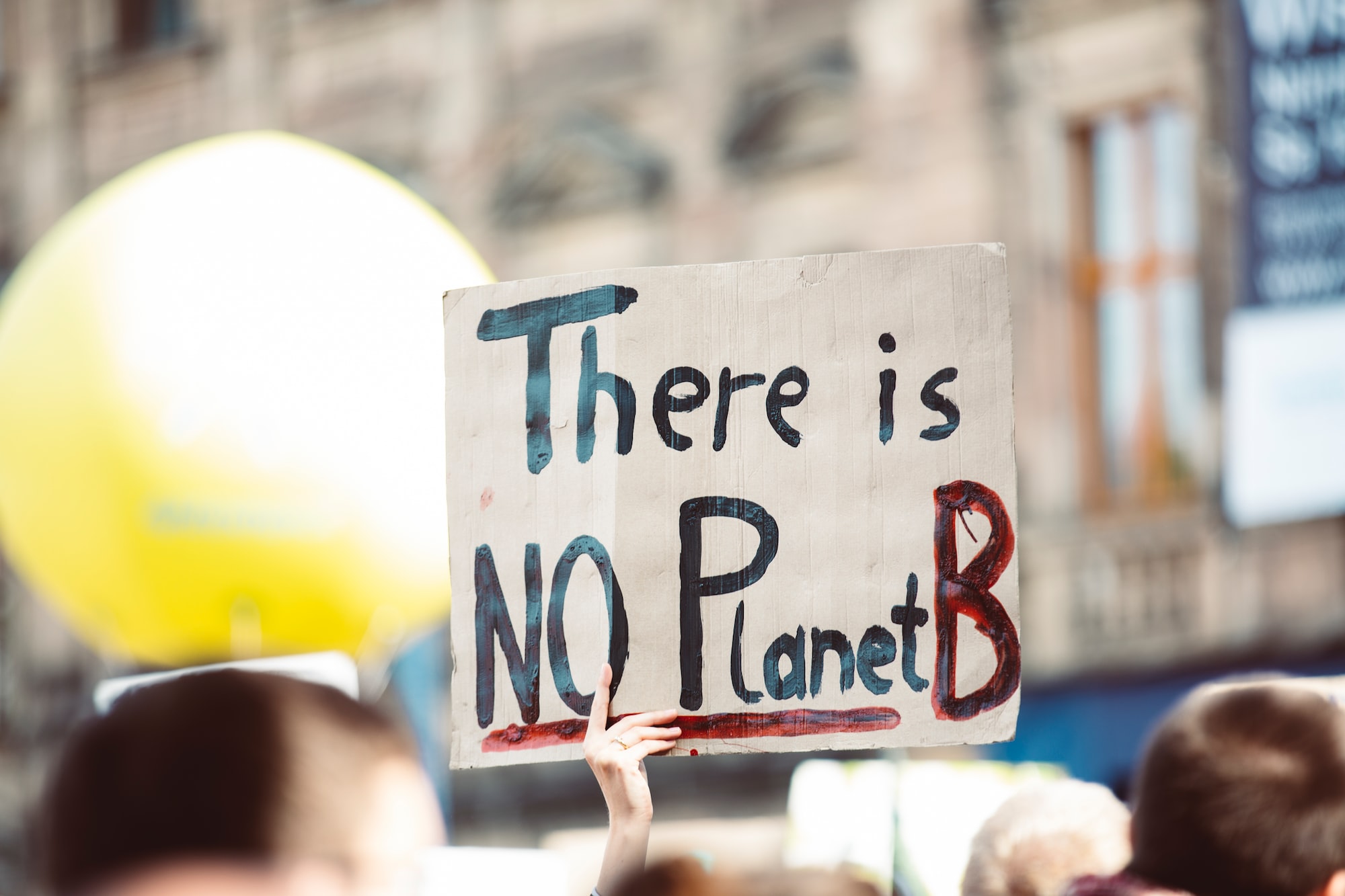 On September 19, 2020, a new message flashed on Metronome, the 15-digit clock which faces Union Square in Manhattan: “The Earth has a deadline.” Then a string of eerie numbers lit up the screen: 7:103:15:40:07. This is the accumulation of years, days, hours, minutes, and seconds left until the effects of climate change become irreversible unless action is taken to curb our emissions and keep global temperatures from rising more than 1.5 degrees. Two years ago, the International Panel on Climate Change (IPCC) released a report that detailed how much more warming the world can stand before the effects of climate change become irreversible. The IPCC’s findings are no longer hypothetical: “Any increase in global temperature (e.g., +0.5°C) is projected to affect human health, with primarily negative consequences (high confidence). Lower risks are projected at 1.5°C than at 2°C for heat-related morbidity and mortality (very high confidence), and for ozone-related mortality.” Furthermore, the IPCC warns that a temperature increase from 1.5°C to 2°C will increase both the prevalence and the geographical range of vector-borne diseases such as malaria and dengue fever. However, the risks are not limited merely to human health. Any rise in temperature will weaken the entire planet’s ecosystem and threaten its survival. Setting the limit at 1.5 degrees Celsius is crucial.

In a surprise move on September 22nd, China announced its plans to become carbon-neutral by 2060, meaning that it intends to offset any of its remaining carbon dioxide emissions then either by planting trees or sequestering carbon dioxide from the atmosphere. While China’s proposed plan makes no mention of restricting other greenhouse gas emissions, it is nevertheless a monumental proposal for the country currently leading the world in greenhouse gas emissions. If China abides by its plan, it could meaningfully shift the date back on the clock.

Crucial to note about China’s climate plan is that it was announced a mere two months before the US presidential election and in the midst of the COVID-19 pandemic. The message coming from China, one centered on amending mistakes and on taking up an international burden, is a sharp contrast to the repeated messages from President Donald Trump, which not only underplay both the climate and COVID crises, but place the blame on China. The question arises of whether the climate change debate brought international competition and strife or if existing political conflict led to the use of climate change as the newest rhetorical tool. Whether such a distinction matters depends on whether the climate benefits as a result.

On September 13, 2020, only days before China released its climate plans, Facebook released a similarly unprecedented announcement concerning its efforts in the fight against climate change, namely the creation of a Climate Science Information Center. An announcement on Facebook’s website states that the new information center seeks “to connect people to factual and up-to-date climate information,” and will be “a dedicated space on Facebook with factual resources from the world’s leading climate organizations and actionable steps people can take in their everyday lives to combat climate change.” Facebook also underscored the measures it is taking to debunk climate misinformation, including “[reducing] the distribution of these posts in News Feed and [applying] a warning label on top of these posts both on Facebook and Instagram so people understand that the content has been rated false.” The development comes after a long controversy involving misinformation propagated through Facebook. In addition to threatening American democracy, Facebook’s dismissiveness of fake-news has long posed a strong danger to climate change as well.

Facebook had acted in a similar way to China: for years, it made no mention of the severity of the climate crisis, but as soon as it realized that emphasizing the climate crisis might boost its image amidst negative press of several condemning lawsuits, it decided to speak up. The announcement, which came coupled with an inspirational video, makes no mention of these controversies or intended reparations, similar to the way in which China made no mention of the above-average emissions it encouraged from companies during the COVID-19 pandemic in an attempt to reboot the economy. Instead, both China and Facebook have sought to repair their image through the release of novel climate proposals. While neither proposal is binding, both China and Facebook straddle the political divide between climate change deniers and believers of science. As a result, they each risk losing potential support from either national businesses or network users respectively. Therefore, regardless of Facebook and China’s motives, these proposals only serve as a benefit to the climate. However, the ticking clock in Union Square isn’t slowing down. Are these developments enough?

The grade-level students who have been rising up in weekly climate strikes across the country for the past two years would argue on the contrary. The protests, inspired in part by Greta Thunberg’s School Strikes for Climate, have surged among youth groups globally. In several countries, the protests’ focus has been to criticize government leadership and parliamentary inaction on confronting climate change. In the United States, however, it is climate denial, climate destruction, and the rolling back of protective climate legislation under the Trump administration which have taken center stage—issues that must be addressed before a concrete path for climate reparation can be conceived. Wielding signs like “Dump Trump” and “Planet over Profit,” students are directly attacking Trump, fossil fuel corporations, and conservative climate deniers. This is a pointed move to stress not only the urgency of the climate crisis, but also the disparities that exist within the country on opinions regarding climate change. As scientists have demonstrated, the opinion to be had is which path we take moving forward, not whether there is a reason to move forward at all.

Climate Change as A Political Tool

Deep in this strife lies the question of whether climate denial is even real or whether it is merely a veil obscuring deeper contention between political opinions. Is it possible that while countries like China have put forth strict plans for climate legislation as a political statement either to remedy past mistakes or elevate their standing among other members of the international community, climate change is being used by politicians in the United States as a puppet to increase the support of a broader conservative agenda? If this is the case, can the reciprocal politicization of climate change by climate activists garner more power than those spreading anti-climate rhetoric? Perhaps, leaning on the international community for support, they can.

The United States, a country that has served as a guide for so many developing countries, seems to lag far behind in addressing the climate crisis and may now need to depend on other countries who are several steps ahead in climate crisis confrontation efforts to outline a similar course of action. According to the most recent National Geographic climate change report card published on September 19, 2019, the three countries who were not only “barely trying” but moving backwards on their climate goals were Russia, Saudi Arabia, and the United States. What is most concerning about the United States, per the analysis of the report, is that “the administration has been working to actively censor climate science within its own agencies, and has established a climate change review panel tasked with questioning the findings of the country’s National Climate Assessment. The leader of that panel is a climate change denier who has stated that ‘the demonization of carbon dioxide is just like the demonization of the poor Jews under Hitler.’” In the year after the report was released, the United States backed out of the Paris Climate agreement.

On the other end of the spectrum, the countries that were abiding most strictly to the goals they signed onto under the 2016 UN Paris Climate Agreement were The Gambia, Morocco, India and those in the European Union. The European Union specifically has not only set goals, but binding ones. The report states that “in May, the EU formally adopted into law a series of measures that included a binding target for 32 percent of electricity production to come from renewables by 2030.” The EU’s measures not only sharply contrast the blunt denial of climate change in the United States, but also the non-binding nature of China’s proposed plans for reducing carbon dioxide emissions. In contrast to the United States, the European Union did not politicize the issue of climate change. While there exists a significant controversy about how best to address climate change, there is little to no disagreement in government or society about the severe threat that climate change poses. It is because of this mutual understanding that opposing political parties are able to unite behind aggressive climate legislation. They do not feel threatened, because constituents in their parties share the same beliefs as well. With a lack of political contentions surrounding climate change, the crisis becomes a priority for all parties.

In countries where climate change has been intimately connected to politics, the success and acceptance of proposed climate legislation is often threatened. Likewise, in such situations, it is more difficult and less efficient to pry the two apart. Thus, the way forward must be to pinpoint and expose the exact joints between conservative politics and climate denial, to continue standing behind the science, and to counteract degrading rhetoric by drawing further international attention and pressure to countries that are still lagging behind in addressing the climate crisis. It is difficult when two countries that are lagging furthest behind, namely the United States and Brazil, are also strong influencers in the international community. However, if one girl can spark an entire movement of youth around the world simply by sitting in front of the Swedish parliament, addressing the politicization of climate change can not and must not be an insurmountable task.