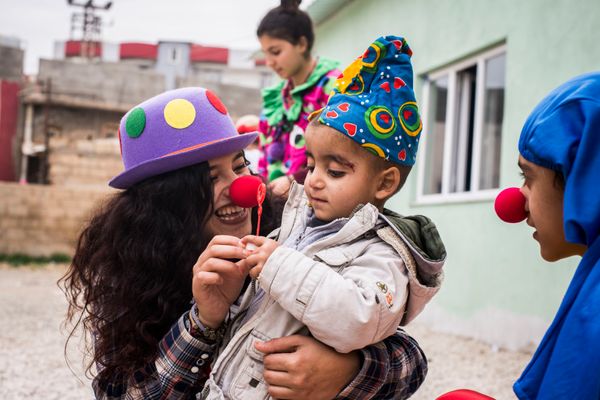 A Balancing Act: Confronting Trauma and Conflict Through Circus

According to Turkish journalist Ismail Saymaz, Syrian refugees have turned Turkey into a “three-ring circus.” He may have meant it ironically. They have–literally.

The Syrian civil war is a conflict that has killed hundreds of thousands of civilians and displaced millions more. Of those affected, over half are children. The majority of Syrian refugees have fled to neighboring countries, such as Turkey, Jordan, and Lebanon. Increasing a nation’s population by millions, seemingly overnight, places a tremendous strain on national resources. Turkey has bills in the billions for the expenditures necessary to support such a large refugee community. In The New Middle East, James Gelvin emphasizes that host countries do not just face the problem of finding a place for refugees to live; they also shoulder the costly burden of providing food, shelter, education, healthcare, protection, and municipal services. As a result of these social, economic, and infrastructural challenges, Saymaz’s stance is not an uncommon one. However, the argument that Syrian refugees have made Turkey a figurative “circus” is an opinion; that they have made it a literal circus is a fact.

In Mardin, Turkey, a city that lies just a half-hour drive from the Turkish-Syrian border, there is a house filled with refugee children. Their futures are up in the air, and so are they. They are swinging from trapezes, climbing aerial silks, and walking on stilts. This house is home to the Sirkhane Social Circus School, where Syrian children between the ages of three and eighteen learn aerial arts, acrobatics, and juggling. Pinar Demiral founded Sirkhane eight years ago in collaboration with the Her Yerde Sanat (“Art Anywhere” in Turkish) Association. Under her leadership, Sirkhane has grown tremendously: its staff has swelled from two instructors to thirty, it has opened multiple centers in Mardin, and its workshops have spread to other Turkish cities. Sirkhane’s creative, therapeutic, and depoliticized response to the Syrian refugee crisis sets a unique example for the international community and transforms traditional conceptions of humanitarian aid.

Sirkhane’s mission extends well beyond teaching kids to juggle. The children that participate have witnessed the violence of the Syrian conflict firsthand. They have left their homes, their schools, and their communities behind. Sirkhane seeks to replace, or at least partially supplement, what they have lost. Demiral explained her inspiration for founding Sirkhane: “This area that we are working in, it is a very colorless area… and [a circus] is very playful, very joyful.” The Social Circus has brought color not only to Mardin’s landscape, but also to the lives of its inhabitants. It is visible in the children’s vibrant costumes, red clown noses, rainbow juggling balls, and bright smiles.

Sirkhane is a place of psychological healing for refugee children. It offers a creative and therapeutic outlet, while simultaneously providing a safe alternative to some of the more harmful pastimes that occur in the camps. Demiral explains that “all the children that come to [the] circus have different traumas,” not only those resulting from the violence of the Syrian Civil War. There are children who “have survived domestic violence [and] some were child laborers.” Sirkhane’s staff addresses trauma “in the beginning so that it doesn’t hurt them in the future.” In this way, its approach to trauma is both reactive and proactive.

Demiral acknowledges that some psychological trauma is too severe for circus alone to heal. However, Sirkhane has not abandoned these cases. Demiral and her colleagues “created a child protection department [with] psychologists” for children with trauma that the circus school is not equipped to handle. The instructors refer these children and then follow up with Sirkhane’s social workers to ensure that every child is getting the help that he or she needs. Furthermore, Sirkhane has established a collaborative network with other international non-profits in the area to provide additional therapy and support.

In many ways, the Syrian conflict has robbed refugee children of their childhood. Sirkhane gives it back to them. According to Demiral, refugee children “are in a… gap, they don’t know what is going to be their future. They have survived, yes, but it is not how a child should live, it is not the childhood they deserve.” She explains that “circus, festivals, everything is a tool for us to create a better atmosphere… They need the laughter.” The Social Circus strives to let young refugees shed the label of “refugee” and just be children.

Students take a bow after a performance for the local community. Photo by Aleksandra Miciak.

Demiral’s voice glows with pride as she describes the transformation she has seen in the students at the Social Circus School: “They love it, it makes them strong, they really want to grow faster.” Sirkhane gives refugee children a place to develop and pursue their passions and ambitions. Their performances in local festivals earn them “respect” and “appreciation” from the surrounding community. As a result, Sirkhane’s students become stronger emotionally as well as physically. According to Demiral, the chance to “[be] a child brings them strength, circus brings them strength, their friends bring them strength.” By providing students with encouragement, validation, and community, Sirkhane better helps them to overcome the hardship in their past and present and hope for a better future.

As another means of developing independence and leadership, Sirkhane’s directors established the Circus Heroes Program. This initiative trains students to become instructors, or “Circus Heroes,” so that they can share their skills with other children. These students have helped Sirkhane to become a “mobile project” and extend its impact beyond Mardin. While the organization’s centers remain in Mardin, the instructors and Circus Heroes often travel to other cities to offer workshops. The directors’ hope is that one day the Circus Heroes will be able to replace them and run the organization themselves.

Demiral acknowledges that Sirkhane has had a profound impact on her own life. Originally, she intended to give a two-week circus workshop to the refugee children in Mardin. However, it was so successful that her two-week project has since become an international organization. Demiral admits, “Before, I was in the city working in the arts, but I wasn’t sure what I was doing.… Now, I’m not judging if I’m doing the right thing.… All my life has become the Social Circus School and… I am always fulfilled.”

Although Sirkhane helps refugee children cope with and overcome the hardships of the Syrian Civil War, it is impossible to escape the conflict in its entirety. According to Demiral, “Every day of the year it is ongoing.… Three people died yesterday [October 10, 2019] at the border near one of our centers. We are actually getting messages about children saying that ‘we are afraid because the sounds of bombs are scaring us.’… We currently don’t have access to the school.” Demiral highlights that violence continues to affect refugees even after they have left a war zone. Sirkhane’s students are still forced to live in fear, a heartbreaking reality that makes the Social Circus School’s work even more important. Sirkhane is able to provide ongoing treatment for long-lasting trauma, ensuring that amidst the fear and violence, refugee children have access to safety and security.

Sirkhane confronts the Syrian conflict on an interpersonal level as well. Its students come from Turkey, Syria, and Iraq, bringing with them numerous ethnic, linguistic, and cultural differences. This variety of nationalities is actually one of the reasons that Demiral chose to establish a circus school: “you don’t need a common language with circus.” She acknowledges that “in the beginning, of course there are challenges.… Not because of [the children] but because of the prejudices from their families and the society that creates hatred between the [Syrian and Turkish] communities.… But when they start to come regularly and play together, they give up this hatred. By the third or fourth month, they become very good friends. They forget these ‘grown up’ matters.” Sirkhane uses circus as a foundation for interethnic tolerance. Its students may appear to be building human pyramids, but they are really building mutual respect, trust, and empathy.

Conflict is the reason that children have come to Sirkhane, but it is not the reason that they stay. Sirkhane’s instructors do not allow fighting and instead seek to end cycles of violence. Circus inherently requires trust, cooperation, and communication, and Sirkhane teaches its students to apply these skills to other parts of their lives as well. Demiral explains that classes revolve around “pair learning” in order to encourage students from different backgrounds to listen to and “learn from each other.” Sirkhane uses this technique in its Circus Heroes Program, sending Syrian children to run workshops in Turkish cities. By teaching refugee children acceptance and understanding, Sirkhane hopes to spread these values throughout the surrounding communities, “between children and also between their families.” While society has taught the children “hatred,” the children can teach society empathy.

Students and instructors celebrate together. Photo by Aleksandra Miciak.

The unfortunate reality of the Syrian refugee crisis is that many calls for international aid are ignored or rejected. In Demiral’s eyes, this is half the problem: “If all the world’s countries take action, this would not be a crisis.” She believes physical distance from the conflict does not excuse emotional distance, because “everyone is connected.” This belief in connection is the foundation for Sirkhane. The Social Circus bridges cultural divides that are often considered impassable. It welcomes volunteers from all over the world, and currently has more international staff than Turkish staff. It has reached out to nearly two dozen other NGOs in the area and built a vast network of support. Demiral explains that this intercultural, international, and interorganizational cooperation “brings a lot of power. It allows you to solve a problem that you can’t when you are just by yourself.”

While the Syrian Civil War is a hyper-politicized conflict with significant ideological and religious roots, Sirkhane deliberately remains neutral. Many international non-profits that respond to the refugee crisis present clear political stances, thus limiting their public base and their capacity to help. However, Sirkhane recognizes that promoting political or religious messages is not in the best interests of the children. Demiral explains, “We put our personal views to the side.… For me, this is actually very easy.” Sirkhane’s clear prioritization of its students above its politics has earned the community’s respect. Demiral admits, “there are of course very conservative religious people that don’t like us but we use different methods to reach them.… But we don’t ignore anyone.… We are not against them.”

Depoliticization is just one of the characteristics that makes Sirkhane’s approach to humanitarian aid so unique and effective. There are many organizations providing immediate medical assistance to refugees, but Sirkhane prioritizes long-term mental and emotional healing. Instead of providing material goods, Sirkhane’s aid is intangible. The circus school brings joy, strength, and hope to refugee children. It teaches compassion, communication, and conflict resolution. These resources are infinite and invaluable. Not only does Sirkhane restore the childhoods of refugee children, it gives them back their futures.

While Saymaz presents a nationalist perspective, Sirkhane cultivates the opposite. Its inclusivity is present in its very name: Sirkhane means “House of Circus” in Kurdish, Turkish, and Arabic. However, Sirkhane is more than just a “house”; it is a home for people regardless of their ethnic, cultural, or political backgrounds. By nurturing collaboration and connection, the organization is able to break down the social and political barriers that often inhibit humanitarian aid. Amidst the conflict and crisis of the Syrian Civil War, Sirkhane demonstrates that it is possible to unlearn prejudice. If hundreds of children can do it, maybe the rest of the world can, too.