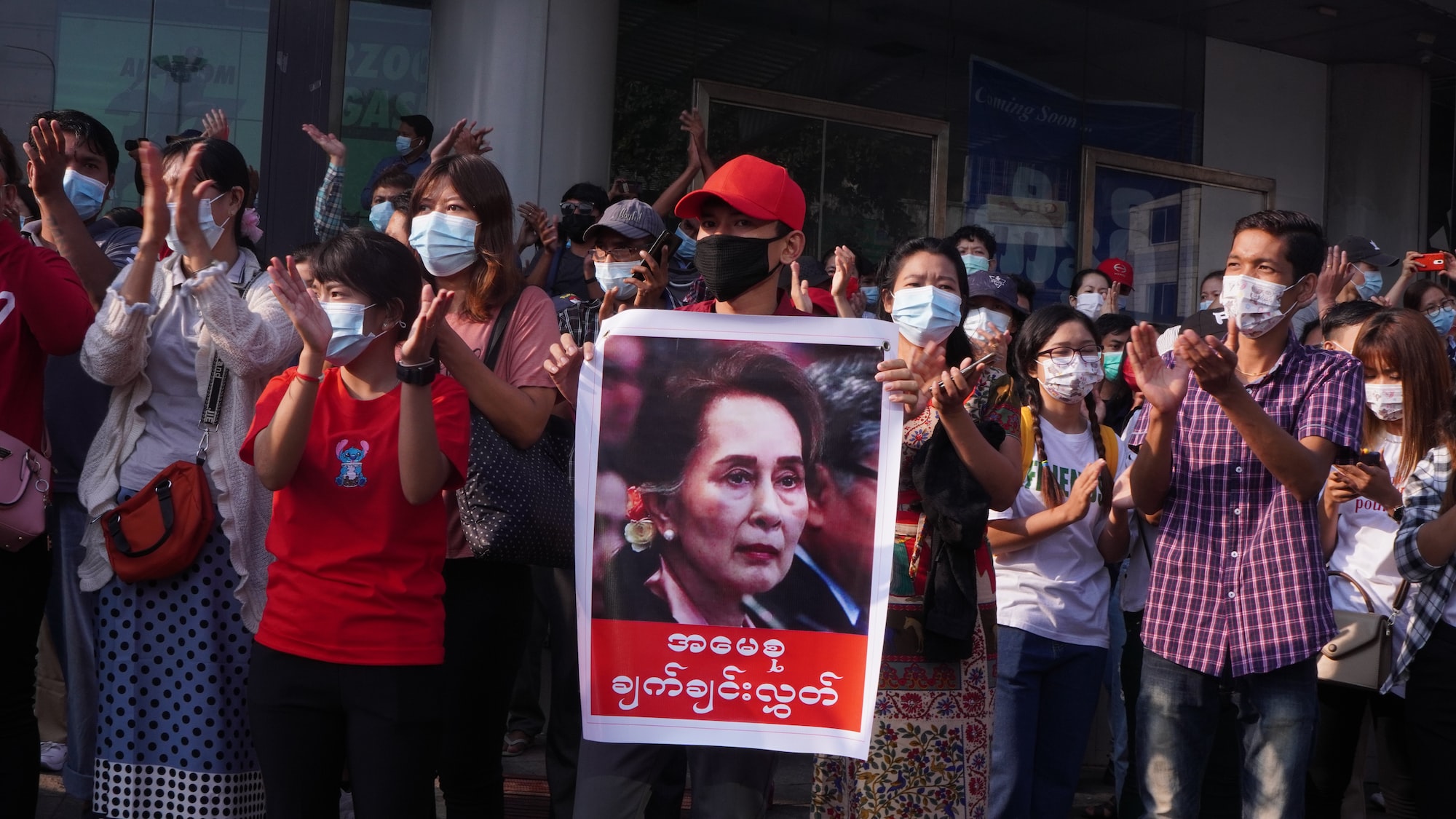 The world was stunned when the Tatmadaw, Myanmar’s military, deposed popular civilian leader Aung San Suu Kyi in a coup on January 21, 2021. As the opposition protests against the coup led to a violent retaliation by the military and the country dissolved into civil war, the international community watched with concern. Nations condemned the military junta’s actions, piled sanctions onto top military officials, and crossed their fingers. But the situation has continued to worsen, and now more than two years later, the country is in an all out civil war with no end in sight.

Despite Myanmar’s continuing humanitarian crisis and democratic disintegration, the conflict has lost the attention of the international community, particularly in the West. While this may at first seem like another tragic tale of affluent and powerful nations refusing to step in and help restore justice in less developed countries, the true picture is much more complicated. Substantial intervention by the US and other Western nations is highly unlikely, given the lack of economic potential in Myanmar and the loss of faith in the nation’s democratic leadership. Moreover, intervention by Western powers may arguably be unwise due to Myanmar’s deep-rooted national military culture as well as China and Russia’s vested interests in Myanmar, both making the country a dangerous boat to rock.

A History of Economic Isolationism

Myanmar’s military has securely held power since 1962. There was a brief period of republican government after Myanmar’s—then called Burma’s—independence in 1948, but that period abruptly ended with a military coup. For the following decades, the military tightly controlled Myanmar with an isolationist foreign policy and a tight grip on the economy. Because of this isolationist foreign policy, foreign firms were not incentivized to invest in Myanmar. The military junta instituted “the infamous ‘Burmese Way to Socialism’ – an ideology that resulted in unprecedented economic devastation and Myanmar’s near-total isolation from the international community.” Myanmar was isolated economically by the junta’s increasing restrictions on foreign aid, nationalization of key industries, and tight control of foreign trade. Ideologically, the junta closed off Myanmar from the West by removing English education from primary schools, clamping down on visas to and from the West, and instituting harsh press censorship.

Myanmar’s economic model changed after the Saffron Revolution protests, in which citizens protested the military junta government because of fuel price hikes. In response to the protests and international pressure, the Tatmadaw began to loosen its grip on power. This loosening of the reigns continued for the next few years, and in 2011, the military junta officially dissolved and a military-dominated citizen parliament was created. The parliament engaged in reforms such as decreasing media censorship and economic regulations, which encouraged international investment. Foreign countries started to invest in Myanmar as the country looked to be entering into a new, more modern stage of development. In 2019, Myanmar’s GDP had grown to nearly double what it was in 2008, and the country’s poverty rate declined from 48 percent in 2005 to 25 percent in 2017.

But since international investment in Myanmar only started to ramp up in 2011, and that investment was not substantial for most countries, few nations have deep economic ties with Myanmar. This lack of foreign investment is one reason many countries are not highly concerned with the instability in Myanmar, since their companies and profits are not on the line.

Also during this period of loosening, the call for democracy was strengthening in Myanmar. This movement was led by Aung San Suu Kyi, an activist whose fame entered the spotlight in the 1980s thanks to her democracy campaign in Myanmar. The campaign culminated in a 2015 election in which the citizens of Myanmar voted for Suu Kyi by wide margins to run the country. The international community was ecstatic about Myanmar’s democratic transition, and hopes were high for the burgeoning democracy.

Countries around the world then had their hopes dashed when the military embarked on a genocide campaign against the Rohingya Muslim population in Myanmar—and Aung San Suu Kyi defended the killings. Many lost faith in her leadership, and this marked the beginning of the West’s re-distancing from Myanmar. The moderate foreign investment that had just begun in 2011 was quickly reversed. The violence against the Rohingya population made foreign investors nervous, and many pulled out their already-meager investments. Along with the loss of faith in Suu Kyi, the divestment in Myanmar led many countries to distance themselves from Myanmar diplomatically.

Despite the violence being carried out against citizens in Myanmar under Suu Kyi’s presidency and her declining international popularity, Aung San Suu Kyi remained popular among the Buddhist majority in Myanmar. As a result, Suu Kyi and her National League for Democracy (NLD) party won the December 2020 elections by a landslide. The military had backed the opposition party, so they claimed that the election was fraudulent and demanded a rerun of the vote. When the election commissions proceeded to deny their claims of fraud, the military carried out a coup against Aung San Suu Kyi and other NLD leaders in February 2021, piling on accusations of corruption against Aung San Suu Kyi that could amount to 100 years in prison. But the citizens of Myanmar were not content to renounce their democratic progress without a fight. Opposition forces reacted to the coup with acts of civil disobedience, such as banging pots and boycotting military-supported companies, ultimately transitioning into mass protests.

The military has reacted violently to the protests with rubber bullets, water cannons, and fire directed at protesters. But the opposition movement did not acquiesce, so the civil war still rages on. The military’s brutal tactics include shooting live ammunition into homes and protesters, razing entire villages, and arresting over 8,000 suspected opposition forces. The Council on Foreign Relations (CFR) reports that at least 1,500 people have been killed, but this is likely a grave underestimate.

Beyond the suffering caused by direct violence, Myanmar citizens are victims of a shrinking economy, a collapsed healthcare system, and skyrocketing poverty rates: millions of people in Myanmar have faced serious hunger crises, with poverty levels expected to double in 2022. CFR writer Joshua Kurlantzick explains that “because of the coup, Myanmar has become a failing state.” While some of this damage has been caused by the COVID-19 pandemic, the civil war has greatly exacerbated the deteriorating living conditions of these citizens.

The international community’s response to the coup has been, on the whole, underwhelming. The Biden Administration has sanctioned military officials and companies, condemned human rights abuses, and pressured the Association of Southeast Asian Nations (ASEAN) to put more pressure on the military junta. But the administration could strengthen their support by sanctioning Myanmar’s oil and gas revenues, persuading other countries to stop supporting the junta, and increasing aid to the opposition movement. The UN has similarly come out with statements against the coup and the military’s violent acts but has hesitated to directly intervene in Myanmar.

Some of the few countries that have remained highly involved in Myanmar are China and Russia, which are close allies of Myanmar’s military junta. Due to China and Myanmar’s close geographic proximity, China has been able to exert significant economic and diplomatic influence over Myanmar. In fact, China is the most supportive ally of Myanmar and its largest trading partner because of their extensive infrastructure and energy projects as part of the Belt and Road Initiative (BRI). Therefore, China has a vested interest in preventing violence and instability in Myanmar by keeping the junta in power, both because of its geographic proximity and China’s economic interests in the county. Some military leaders in Myanmar are wary of losing power to Chinese influence, but with the West’s refusal to accept junta leadership, military leaders are forced to grow closer to China.

Russia is also an increasingly strong ally of the military junta. They did not support an arms embargo on Myanmar and have not condemned the coup. In fact, Russia has even continued arms sales to Myanmar during the coup period. In return, Myanmar has wholeheartedly backed Russia’s invasion of Ukraine. Russia needs strong allies right now, given the backlash they face over the war, so they have a clear interest in keeping the military in power.

China and Russia’s vested interest in keeping the junta in power in Myanmar make intervention on the side of the opposition a formidable task. What’s more, although the international community was optimistic about Myanmar’s democratic transition, the military never really lost its hold on power in Myanmar. Even when the parliamentary democracy was nominally in control, the Tatmadaw still maintained control over foreign relations, domestic security, and many other policies. The military also has significant holdings in major national companies, so their control extends far into both the economic and political spheres.

That being said, the strength of the military junta is currently being questioned given their struggle to crush the opposition movement and their lack of recognition internationally, as both the UN and ASEAN have refused to recognize the junta as the official government of Myanmar. But regardless, the military is so entrenched in Myanmar’s systems and bent on holding power that replacing them with a democratic government is a task no nation wants to take on.

As such, the status quo of limited international intervention will likely remain. Western nations may continue to send hopes, prayers, and sanctions, but not much more. China and Russia will likely continue to support Myanmar’s military but fall short of dedicating their forces to the fight. But not all is lost for democracy in Myanmar. The Tatmadaw has promised to eventually return to democratic elections, a promise that does look admittedly questionable now but could be acted upon in the future. The opposition movement has also managed to put up an impressive fight against the Tatmadaw, with the military regularly losing battles to opposition forces. At the present moment, then, the military’s victory is not a foregone conclusion; but it does seem that Myanmar's future is in no one's hands, but those of its people.

Emily Peck is a staff writer for the HIR. She is interested in Central American politics, immigration rights, and U.S. foreign policy.