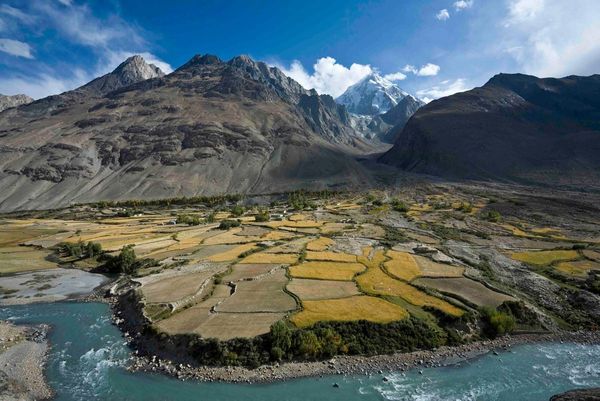 The New Road to Conflict: Geopolitics of the Wakhan Corridor

Afghanistan is the very definition of a geopolitical pivot. Long called the “Graveyard of Empires,” the country still lures larger powers keen on exerting influence in Central Asia, and the Wakhan Corridor, a narrow strip of land protruding out of Afghanistan like the handle of a cooking pot, exemplifies this strategic geopolitical position. Three separate geopolitical conflicts intersect in the Wakhan Corridor: the so-called “New Great Game” between Russia and China over Central Asia, the rising geopolitical contest between China and the West over the new Belt and Road initiative, and the ever-inflamed (but now ratcheted) tensions between India and Pakistan over Kashmir. However, China’s recent moves to build a road through the corridor will upset this delicate geopolitical balance in its own favor.

The Wakhan Corridor has long been involved in geopolitics. Historically, Wakhjir Pass at the end of the corridor has served as an important conduit on the Silk Road, facilitating trade between China on one end and ancient Rome on the other. More recently, both the Russians and the British viewed Afghanistan as a strategic buffer to prevent the other from expanding too much into their territory (Central Asia and India, respectively). The Wakhan Corridor was born from this strategic logic, drawn by the Pamir Boundary Commission (a joint Russian-British entity) to prevent present-day Tajikistan and Pakistan from having a direct border.

China’s recent decision to actually follow through on building a road through Wakhjir Pass complicates the region’s geopolitical situation. Afghanistan and China signed a memorandum of understanding to study the road’s construction in 2009, but analysts then thought the road’s construction was infeasible. Now, although it is currently far from completion, Afghan workers have made significant progress on the road, which would end up connecting Afghanistan’s road network to the recently-built Karakoram Highway linking Kashgar in Xinjiang to Islamabad.

China would definitely benefit from the road’s construction, but the most significant geopolitical implication of its construction is the secrecy around Karakoram Highway: Hardly any media outlets have reported on it, and it appears that China has successfully kept the project off the radar of its geopolitical rivals. As Sun Tzu noted, “Surprise will lead to victory.” The Chinese have taken that maxim to heart.

Given Afghanistan’s strategic location, the road through the Wakhjir Pass connects with two Chinese geopolitical goals: increasing commerce with Central Asia to the north and increasing connectivity with its newly developed port at Gwadar in Pakistan to the south. Even considering the region’s harsh terrain and equally harsh winters, the road still represents the cheapest route between China and Central Asia, and its construction would fulfill China’s goal of increasing its economic and military footprint in the region. The road will also open up the way for shorter pipeline routes between Central Asia and China, increasing Chinese energy security while benefiting Central Asia’s economy.

Additionally, building the road would further open up Afghanistan to the Chinese market—and conversely allow Chinese goods to further penetrate the Afghan market. China has already invested hundreds of millions of dollars in Afghan natural resources, and the road’s development would both encourage further Chinese investment and allow Afghanistan to more easily export its products to the Chinese market. Coupled with earlier announcements that the Chinese would use the Wakhan Corridor for a new fiber optic project, the road’s construction and its associated projects would certainly bring manifold benefits to Afghanistan.

American officials should worry about the road’s development for its military implications. China recently built a military base in Tajikistan, signaling a Chinese willingness to expand its hard power into an area with a large American troop presence. Its reasoning has remained murky since it has denied its troops’ presence in the area, but China likely built the base in order to keep an eye on any potential flows of insurgents and materiel from Islamic Tajikistan into the Xinjiang region, where it has come under fire for its repressive detention policies.

Once the road is fully built, China will not have to dance around the Afghan border. Instead, it will be able to move in troops quickly and easily. Although China has traditionally been loath to press its hard power, Xi Jinping has espoused a more militaristic view than his predecessors, supplementing various diplomatic initiatives with security patrols and counter-terrorism initiatives in the region. Indeed, Afghans noted that they routinely saw Chinese troops conducting these “counter-terrorism” operations in 2018. By the time China finishes the road, it will have the means—and likely the inclination—to easily move troops into Afghanistan, making it more likely that plans for the proposed base in the area would come to fruition.

Such a base would also spell trouble for American geopolitical interests, showing that China is becoming an increasingly serious alternative to the American presence in Afghanistan. However, an increased Chinese military presence would help to cut down on terrorism, and the increased legitimate trade (and the military presence along with it) along the corridor would help to decrease its prominence as a drug smuggling route, both positive results for American interests. Indeed, the United States has previously asked China to open Wakhjir Pass as an alternate supply route to its forces in Afghanistan, although it did not accede to those requests, and it is unclear if China would allow American military supplies to pass through the road.

Indian officials should also worry about the road’s development, but for different reasons. It has stridently opposed projects such as the Karakoram Highway that go through the Pakistani portion of Kashmir and griped about China’s so-called “String of Pearls” strategy to isolate it. The road’s development, especially within the context of larger Chinese military involvement in Central Asia, will rightly increase these fears, as an increased military presence in Afghanistan that the road makes possible will give it another outpost near India’s borders, ready to outflank the country geopolitically.

Additionally, increased commerce through the Wakhan Corridor to the port of Gwadar would almost certainly benefit Pakistan, India’s main geopolitical enemy at the moment, both commercially and diplomatically. Finally, increased trilateral relations between Afghanistan, Pakistan, and China that the road’s commerce will trigger will also harm India’s geopolitical standing, especially since Afghanistan is gradually turning to China rather than India. In turn, greater Chinese relations with Pakistan will reduce the potential that it will make strategic concessions to India.

Admittedly, the mountainous Wakhan Corridor would not immediately become a transportation hub, and China appears to be building the road to facilitate troop movements and the development of other infrastructure, such as pipelines and fiber optic cable. Nonetheless, its construction presents a number of geopolitical implications for the region, especially given that the road would give China another option to further its Belt and Road projects in Central Asia. Now that the road is underway, the belt, in the form of additional infrastructure projects, will almost certainly follow.