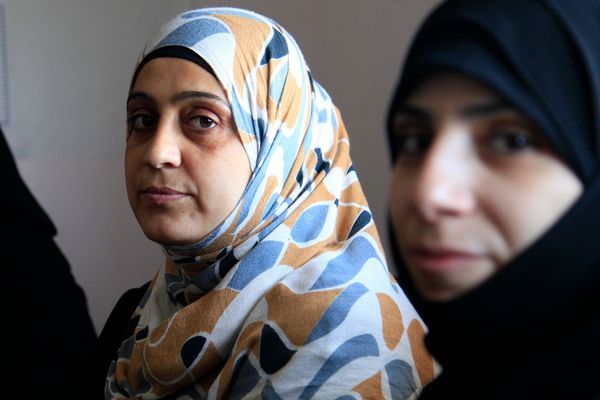 Nowhere to Turn: Women in the Syrian Civil War

Although women’s issues in developed nations are gaining more attention, the issues refugee women face continue to be overlooked as war torn nations struggle to provide even basic needs for the displaced.

The Syrian Civil War began with pro-democracy protests against Syrian President Bashar al-Assad in March 2011, in response to Assad’s authoritarian regime and violent crackdowns. Rebel militias formed to fight government forces, resulting in a civil war that has thus far caused the deaths of over 250,000 people and displaced over 11 million others. Currently, there are 5,636,625 registered Syrian refugees, from Lebanon to Iraq. Refugees have fled to escape the horrors of war and the crimes perpetrated by the Islamic State, including public executions and mass killings of minorities and rival armed groups. As a result of the crisis, one quarter of neighboring Lebanon’s population—one million people—were refugees as early as 2014, straining already taxed public services. Moreover, 70 percent of Syrian refugees in Lebanon live below the poverty line, subsisting on less than US$3.84 a day. Furthermore, citizenship paths are often closed to refugees, especially in Lebanon, resulting in social ostracization of refugees in their host nations. One female refugee who participated in a study about refugee mental health summarized her traumatizing experience: “Sometimes there are situations that always remind you that you’re a refugee.… Once they know that you’re a refugee they sort of look down upon you and they make you feel [like] rubbish and nothing.”

This dangerous and isolating situation has forced women to take on new roles that clash with societal stereotypes. In Syrian society, women are conditioned to take on stereotypical “female roles,” such as childcare and housework, and husbands are allowed to prohibit their wives from working. By 2013, the percentage of working women in the Syrian economy had decreased to 13.5 percent from 16.3 percent two years before. However, as a result of the violence occurring in Syria, husbands, fathers, and brothers, who acted as the leaders of the household in Syrian society, have died or gone missing. In Jordan, for example, 40 percent of Syrian households are estimated to be female-headed; in Greece, the figure is 50 percent. The shortage of men has created an unusual family dynamic, forcing women to become heads of their households. On average, each woman must take care of 5.6 other people, including children and elderly relatives. Thrown into this role during a tumultuous period of migration and war, women feel lost in the confusion and struggle to adjust to their new position.

To add to their difficulties, the safety and security of the refugee camps, both in Lebanon and in European countries, are deplorable. Bad lighting and a lack of privacy create dangerous conditions for women and children, and the women are taught not to scream if harassed in the streets. Camps in Europe generally lack lighting, locks on showers and toilets, and separate sleeping sections. In some transit camps, women and men are forced to sleep in the same tents, prompting many women to sleep outside in poor weather conditions in order to feel safe. Some women even reported that they wouldn’t eat or drink so they wouldn’t have to go to the bathroom. Furthermore, UNHCR has reported that women receive fewer resources and supplies, especially when they are limited; sadly, even some humanitarian workers abuse their power and discriminate against women.

Easily exploited by locals, police officers, or security guards along their journeys, many refugee women feel pressured to trade sexual favors to smugglers in exchange for aid or cheaper passage to safety, or they form relationships on the road so that they could have a man to take care of their families. Unfortunately, although women and children face high rates of harassment and sexual and domestic violence, women are taught not to seek help; once these traumatic incidents take place, they are afraid to report such events because of the humiliation and shame associated with it. Therefore, feeling that young girls around age 14 need a male figure to protect themselves and their family honor, female household leaders often force girls into child marriage, almost half of the time to men at least 10 years older than them. Girls’ childhoods and educations end prematurely, resulting in high-risk pregnancies at very young ages and perpetuating cycles of domestic violence and poverty.

Since women, as refugees displaced both within and without Syria, must provide the main source of income to feed their families, they feel more vulnerable without the support and protection of their collective communities. However, this shift has slowly led to an increase in female autonomy and empowerment. More women are taking jobs, setting up small informal businesses, or creating cooperatives, such as soap-making. Additionally, women make up a large percentage of agricultural and factory jobs. In some parts of Syria, 90 percent of the agricultural workforce is filled by women. On the other hand, even when Syrian women work during this period of war, they are encouraged to take on jobs that are seen as “appropriate” for their gender, such as teaching, healthcare, and craftwork. Although they are also slowly filtering into the world of journalism, with approximately 54 percent of the radio workforce being female, these Syrian women remain sidelined from leadership and more prominent positions on TV and on the frontlines of news, despite journalists of both genders facing the same risks. In general, women are not receiving equal pay, benefits, or access to leadership positions. In 2016, in a southern province of Syria, female-headed households had up to 32 percent lower monthly incomes than male-headed households, showing a clear disparity between the genders.

Furthermore, women’s health, including physical, mental, and reproductive health needs, seems to be merely a side-note in refugee camps. In fact, surveys about sexual harrassment incidents and general sexual health are difficult to conduct in these communities, due to the stigma associated with talking about sexual harrassment alongside the conservative nature of Syrian society, which limits discussion of sex and sexual health in general. However, it is clear to many NGOs assessing Syrian refugee camps that women’s access to basic healthcare is severely curtailed; generic health kits do not provide sanitary napkins for women, and women lack access to contraception and maternal healthcare. Birth rates and infant mortality rates are both distressingly high, and women have limited access to appropriate facilities, neonatal care, family planning mechanisms such as birth control, and counseling for trauma. Cost, distance, lack of transportation, fear, and shame all present barriers of access to healthcare for women.

The prevalence of anemia among women and children is also disproportionately high. In the Zaatari refugee camp in Jordan, originally intended to be temporary but which now permanently houses thousands of refugees, 44.8 percent of women have anemia, an alarming statistic that indicates a dangerous global health crisis. Female refugees undergo consistent abuse, shaming, stress, food instability, loss, and trauma, and they continue to face shifts in location, familial structures, community support systems, and gender roles. The mental and physical toll these experiences have taken on their lives and the increased risks they face are severe, yet remain overlooked.

Stigmatization due to gender roles must be addressed in order for displaced women to be able to successfully navigate their refugee status, despite the conflict between women’s rights efforts and the cultural aspects of women’s roles in Syrian society. In 2017, the nonprofit Bareeq Education and Development surveyed Syrian women over the age of 18 inside and outside the country, and of 1,006 respondents, 81 percent stated “that the social norms in Syria truly impede women’s success,” demonstrating the inherent difficulty social standards present for Syrian refugee women. To combat these issues, the Syrian Women’s Network, a set of over 200 non-governmental organizations, and other groups funded by the Global Fund for Women, such as Solidarity and Lebanese Women Democratic Gathering, are all working to empower women and encourage equality in Syrian society and refugee camps. The Syrian Women’s Network is striving to rewrite the Syrian constitution and enshrine truly equal rights for women in social, economic, and civil and criminal spheres. Coupled with these efforts, on the basis of the Universal Declaration of Human Rights and the Universal Declaration on the Elimination of Violence Against Women, the Lebanese Women Democratic Gathering is advocating for the establishment of vocational training centers for women, provision of literacy courses, and development a healthcare center that caters to 150 patients monthly, among a variety of other projects to fill the gap between where the women are and where the resources exist.

Despite the need for peace and general stability, refugee women’s rights, which affect a significant proportion of the Syrian refugee population, demand attention. Additionally, children’s rights are deeply interconnected with women’s rights, and the economy is also irreversibly rooted in women in the workplace. Therefore, international governments and NGOs must refocus their attentions and efforts more deeply upon the issue of women’s rights and fight against ingrained stereotypes in order to both provide women with access to more resources and protection from harassment, mitigating the conflict as a whole. By lifting up women, we can lift up the world of Syrian refugees as well.