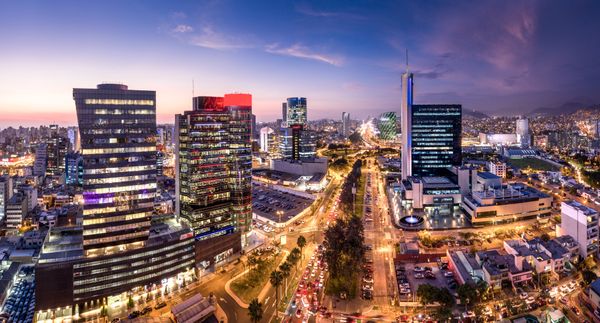 From the high peaks of Patagonia to the tropical beaches of the Dominican Republic, Latin America has long been a playground for the world’s great powers to flex their muscles. As such, a natural inclination would be to assume that the tides of today’s principal geopolitical storm (the global conflict between the US and China) will come crashing against the Pacific coast of the Americas just in time to rope the region into a conflict it never asked for. After all, the winds of change are coming, and if US Southern Command’s record 33 mentions of the nation in a routine priorities questionnaire are any indicator, they may already be here. So, given the region’s long, highly tumultuous history of destructive foreign involvement, what reason is there to assume that China and the US will give Latin America any room to develop on its own terms this time around? As is always the case in geopolitics, actions speak louder than words, and this time, the conduct of the great powers indicates that they are unlikely to repeat past mistakes, allowing room for regional non-alignment and, even more critically, sovereign, healthy, and measured economic development.

China, a nation that itself fostered a miraculous few decades of economic growth while maintaining a policy of quiet, unproblematic development, would be the first to underscore the importance of remaining peripheral until the time is right. Nevertheless, the Asian nation has become notorious for its allegedly opportunistic approach to global lending through its Belt and Road Initiative (BRI), often providing “too good to be true” offers to finance projects in the Global South. A quick glance at the region’s recent history highlights why this matters for Latin America in particular. Throughout the mid-to-late 20th century, as Cold War tensions in Latin America reached a boiling point, lending from the U.S and its allies to a host of Latin American nations reached wholly unsustainable levels. As monetary policy in the US tightened and interest rates rose once again, Latin American nations were unable to cope with the upcoming global recession. Today, the resulting default-induced economic crisis of the 1980s is coined Latin America’s “lost decade.” Today, despite decades of attempting to match the rampant development seen in other parts of the world, Latin America still makes up only five percent of global GDP.

Although the merits and drawbacks of China’s initiative remain unresolved, and Latin America is still only beginning its BRI involvement, situations such as that which is currently unfolding in Sri Lanka highlight how sovereign debt defaults in the developing world are often followed by economic and political crises. As the world’s largest creditors attempt to stave off recession by hiking interest rates and the parallel between Latin America’s debt crisis of the 1980s and today’s environment becomes increasingly apparent, this danger looms particularly large. For this reason, the current trend in lending from the US and China to Latin America is encouraging.

Between 2005 and 2020, China’s Export-Import Bank and China Development Bank lent roughly US$138 billion to Latin America and the Caribbean. Despite this figure, state-to-state finance from Beijing to Latin American nations has been decreasing for several years now. Instead, China’s major policy banks have altered their approach to enable Chinese influence through a greater quantity of loans to Chinese companies investing in the region, thus alleviating part of the burden on government balance sheets. This trend is being applied throughout the region, regardless of the state of China’s political ties with recipient nations. Even the strongest supporters of Beijing in the region (Brazil, Argentina, and Venezuela) have seen their direct financing wither in favor of greater lending to Chinese companies. Alternatively, dollar-denominated debt in emerging markets has decreased globally, and now makes up a mere 17 percent of government debt in major Latin American economies. Although the motivations for this swing in attitude are unclear, the change reduces the likelihood of a lending war in Latin America aimed at gaining influence, in turn reducing the risk of burdensome debt accumulation in the region’s poorer nations.

Still, Latin America’s massive, potentially unhealthy trade dependency on Beijing may have been the impetus for China’s more laid-back approach. Since 2010, Latin American trade with China has more than doubled to US$450 billion, and the Asian nation is now South America’s leading trade partner. This trade partnership consists primarily of Latin America supplying natural resources such as iron ore and soybeans and China supplying manufactured consumer goods. While this trade partnership might appear unthreatening now (accurately, perhaps), the large and increasing quantity of trade with China as a percentage of total trade is cause for concern. By 2035, the World Economic Forum estimates that Chinese trade participation in Latin America may account for 25 percent of the entire region’s trade, and more than 40 percent of exports from Chile, Brazil, and Peru alone. Amidst uncertainty regarding the Asian nation’s “zero-covid” policy and its own ensuing property debt crisis, China’s gargantuan role in Latin American trade should rightly draw scrutiny.

On the other side of the Pacific, Washington is pulling its weight to make its China policy growth conducive for Latin America as well. Beginning in early June at the Summit of the Americas, the Biden administration highlighted that, by excluding the undemocratic regimes of Cuba, Nicaragua, and Venezuela from participation, it would not compromise its values for a leg up in a global competition. In the wake of decades of brutal US intervention in the region, which ranged from support for Brazil’s mid-century military dictatorship to Nicaragua’s ruthless Contras, the message that this administration will not repeat the mistakes of former leaders is resounding. In anticipation of the upcoming, likely-to-be-contested election in Brazil and Argentina’s prospective inclusion into the BRICS group, the timing of this de-escalation is critical.

Without foreign pressure, Latin America’s governments have almost unwaveringly trended towards democratization. In the two decades since the end of the Cold War and the depressurization of relations in Latin America, it has become the region with the greatest proportion of democratically elected governments outside of Europe and North America. Although China does engage much more closely with the undemocratic regimes in the region than the US does, it takes no issue with conducting business with other democratic nations, and, as such, operates in a non-obtrusive way with many of the region’s governments. For the region’s future, this hands-off approach to diplomatic relations will be critical if it is to break the status quo of stagnant economic growth. This is because history shows that the level of foreign intervention and strength of government institutions in developing nations are often much better markers of future success than their style of government. Accordingly, there is immense precedence for the benefits of authoritarian consolidations of power in countries seeking rapid economic development. Latin America’s outlying development success story, Chile, sowed the seeds of its future dynamism under the authoritarian helm of Augusto Pinochet. During the latter years of this period, by way of a group of Milton Friedman-educated neoliberal economists dubbed the “Chicago Boys,” Chile’s economy paved the way for its remarkable post-Pinochet growth. Today, it is the only middle-income country in the region. More broadly, this trend is not unique to Latin America or China. South Korea under Park Chung-hee and Singapore under Lee Kuan Yew both achieved marvelous feats of development under non-democratic regimes that situate them as economic leaders in Asia today. Evidently, institutional strength and calculated diplomacy are paramount determinants of successful economic development.

Economic development anywhere in the world is complicated and requires a deft combination of strong governance and well-planned economics. Ultimately, although foreign powers can provide assistance, break down obstacles, and support emerging economies in other ways, inflection points must originate from within a nation’s own borders. In Latin America, issues of rampant corruption and economic inequality need to be addressed before meaningful progress can be made, and future success stories will be catalyzed by the actions of regional leaders rather than those overseas. Still, after decades of internal conflict, fruitless economic restructuring, and seemingly inescapable involvement in global conflicts, Latin America appears to be turning the page, finally able to usher in a new era of development to break its vicious cycle.

Alex Gerstenhaber is a staff writer for the HIR. He is primarily interested in economic development, world order, and the intersection of visual art and politics.