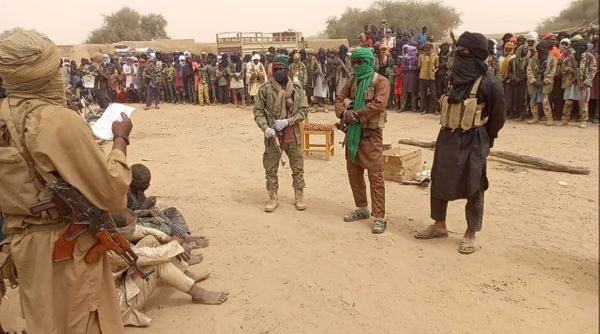 In June 2021, a group of Islamist militants rushed into a small, rural village. Mostly child soldiers, they arrived on motorcycles and burned the village’s market. The terrorists fired indiscriminately into the crowd, quickly overwhelming the volunteer force defending the town. Survivors buried the 160 dead in mass graves. The attack was, in the words of local politician Eddie Komboigo, a “massacre of our people.”

This is not a scene from Afghanistan, Yemen, or Syria, where most terrorism is thought to take place. The village, Solhan, is in Burkina Faso, where terror groups have gained prominence over the past decade. The country is not alone in this reality. The entire Sahel region, which consists of a broad swath of scrubland on the border between the Sahara and sub-Saharan Africa, has seen a dramatic spike in Islamic terror activities in the past decade. In Mauritania, Mali, Burkina Faso, and Niger, all among the least developed states in the world, terrorism has seen a recent surge even as deaths fall globally. Just two of these states, Mali and Burkina Faso, accounted for eight percent of all deaths from terrorism in 2019 despite comprising less than half a percent of the world’s population. While the world has focused on combating extremism in the Middle East, a crisis has emerged in these two countries, one that threatens to undo decades of antiterrorism efforts.

The Disintegration of Mali

The unrest in Burkina Faso and its neighbor, Mali, are examples of the destabilizing power of Islamic extremism. In West Africa, where states are weak and territories vast, terror groups can grow quickly and violently. Despite plans to grow the size of its military, Mali’s armed forces remain inadequate to effectively police the entirety of the country. Among the least densely populated states in the world, Mali’s vast distances make policing especially challenging, especially in regions far from the capital of Bamako. Tucked in the southwest of the country, Bamako struggles to extend its power to the rest of Mali.

This became especially evident after Mali descended into conflict in 2012 after experiencing an insurgency by the National Movement for the Liberation of Azawad (MNLA), an ethnic separatist group. The rebellion was the fourth of its kind since the nation’s independence from France in 1960, and it quickly led to a military coup that plunged the nation into turmoil. In the civil war that followed, several new groups rose to prominence, including several extremist groups that first backed and then clashed with the MNLA. Between the MNLA and the other separatist groups, several of whom banded together in 2017 to form the Group for the Support of Islam and Muslims (JNIM), extremists managed to occupy most of the country’s arid northeast. The JNIM is al-Qaeda’s official affiliate in West Africa and has grown from its constituent members’ involvement in the Malian conflict to wage a campaign of violence in the entire region. The group’s prominence has grown dramatically, and it now stirs violence routinely in Mali as well as in Burkina Faso and Niger.

By 2013, most of the country’s northern area was under the control of either the MNLA or the constituent groups of the JNIM. The relatively weak Malian armed forces had difficulty combatting the growing insurgency and appealed to France, the region’s former colonial power, for help. The French responded by launching Operation Serval, a campaign of airstrikes and boots-on-the-ground support. The French intervention managed to quickly push the insurgency into more manageable numbers, but terrorism’s hold on the region proved stubborn. What was supposed to be a year-long counterterrorism mission has stretched into a protracted counter-insurgency program that has drawn France back into its former colonial territory indefinitely. In a dark parallel of George Bush’s declaration of the end of major combat operations in Iraq, then-French President Francois Hollande declared, “the bulk of the work has been accomplished.” Shortly after the end of Operation Serval, France began Operation Barkhane, a longer-term stabilization effort that included more than 4,000 French troops on the ground.

The reach of the French military’s deployment quickly expanded. In 2014, France gathered five states, Burkina Faso, Mali, Chad, Niger, and Mauritania into G5 Sahel, a region-wide security union aimed at combating “the leading causes of institutional fragility in the region.” The group pooled 5,000 soldiers to help keep destabilizing forces from crossing the region’s porous and poorly-controlled borders. The effort was paired with an influx of developmental aid from France, the EU, and several international organizations. France alone has poured more than five billion euros into the Sahel states since the conflict began in 2012.

France’s actions are complemented by the United Nations’ Multidimensional Integrated Stabilization Mission in Mali (MINUSMA), a sprawling 13,000-strong peacekeeping force. Since MINUSMA’s deployment, more than 250 peacekeepers have died, making it one of the UN’s deadliest deployments. The foreign troops in Mali now number over 20,000.

The situation in Mali is far from resolved; the nation suffered another military coup in August 2020 that put the state into limbo. The UN’s head peacekeeper reaffirmed the severity of instability in Mali in April 2021, and a second coup followed just a month later. The influx of money and forces into Mali has stopped full-on civil war, but violence remains pervasive. After almost a decade of counterterrorism efforts, continued state fragility threatens to leave a power vacuum for terrorist groups.

Mali’s recent instability comes at a critical juncture. French President Emmanuel Macron announced this summer that Operation Barkhane and France’s major involvement in the Sahel would come to an end in early 2022, outlining a plan for a much smaller force to remain and direct counterterrorism operations among the G5 states. With the impending withdrawal of over 5,000 French troops and the continual weakness of the government in Bamako, Mali remains as susceptible as ever to terrorist groups that take refuge in the country’s vast and sparsely populated interior. Mali’s military government, which had promised a democratic transition after, is now at risk of losing its foreign support, an outcome that might reverse the progress of the last decade.

The UN estimates that more than a million people are at risk in the country, including about 370,000 internally displaced persons. Since 2007, an estimated 1,700 people have died as a result of terrorism in Mali in almost 580 different incidents.

As Mali looks at a potential return to the instability that marked its early 2010’s, its neighbor Burkina Faso faces a worsening crisis of its own. Extremist violence in the country’s north has propagated a humanitarian disaster of staggering proportions. As of June, the UN estimates that more than 1.3 million people have been displaced in Burkina Faso with 3.5 million in need of humanitarian assistance, comprising what has been labelled “the world’s fastest growing displacement crisis.” Although the state is a member of G5 Sahel and the largest contributor of troops to MINUSMA, Burkina Faso does not have a UN peacekeeping mission offering assistance.

The most prominent extremist group in the country is the Islamic State in the Greater Sahara (ISGS). First claiming an attack in 2016, the group is directly affiliated with the larger Islamic State organization and seeks to establish an Islamist caliphate in the Sahel. In attempts to reach this goal, the group has effectively seized control of some small portions of Burkina Faso. A highly publicized attack that killed four American soldiers in 2017 brought the group to international attention, but did not garner the same multinational response as its larger Levantine cousin.

In the 2020 Global Terrorism Index report, Burkina Faso jumped 15 spots to become the 12th most affected state by terrorism. In 2019, deaths from terrorism jumped 590 percent with almost 600 individuals being killed. An attack along the Mali border in August caused 80 deaths alone. New refugees and displaced persons continue to flee the unstable north at rates of 13,000 a month, signifying a seemingly uncontrollable descent into violence and instability.

As the US deals with the ramifications of its withdrawal from Afghanistan, the global outlook for terrorism, both international and domestic, looks bleak. After two decades of counterinsurgency warfare across the Middle East, Western nations are reluctant to commit either funding or personnel towards foreign antiterrorism or state-building. While the groups in Burkina Faso, Mali, and other Sahel states have largely limited their violence to regional spheres, instability only begets more instability. The Islamic State and al-Qaeda, two of the more prolific terrorist organizations of the 21st century, both have offshoots in the Sahel. Without more attention and, critically, more humanitarian aid, the region will only descend further into turmoil. Nearby Chad recently had its president killed in clashes with rebels, pushing the nation into uncertainty and opening up a new frontier for terrorist groups to expand into. The spectre of neighboring Nigeria, where Boko Haram’s more than decade long insurgency has exacted a staggering toll, looms as a possible future.

At the moment, the Sahel region is in crisis. If the past decades of global counterterrorism have yielded one lesson, it is that terror groups are incredibly resilient and volatile. Terror groups and their violent ideologies spread and take root anywhere instability and poverty allow. Left alone, West African states, among the weakest in the world, are extremely vulnerable to terrorist groups. If nothing else, Burkina Faso and Mali are a lesson that, just as terrorism has become a global phenomenon, the response to it must be global as well.

Taliban Sovereignty: The Future of Non-State Entities in the UN