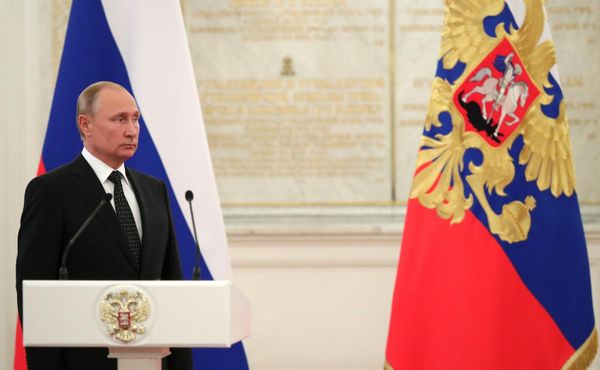 Luciano Arvin is a researcher at Trent University, where he studies history and international relations.

This week, as the coronavirus pandemic abates, Russia plans to hold a statewide plebiscite on amending their constitution. One proposed amendment would allow Russian President Vladimir Putin to run again for two more six-year presidential terms, potentially extending his time in the Kremlin to 2036 (at which point he would be 83).

The smart money—in this case, rubles—is on the Russian people voting to deliver Putin additional office time. Putin enjoyed a 63 percent approval rating in March 2020, even as falling oil prices and the coronavirus pandemic decimate the Russian economy. With the plebiscite postponed as a result of the pandemic, now seems like an appropriate time to reflect on how Putinism, Putin’s political doctrine, encapsulates Russia.

At face value, Putinism is a complex amalgamation of modern Russian forces. It encompasses a resurgence of nationalism and exceptionalism, a return to the embedded authoritarianism of the Soviet Union, a mutation of tried liberal economic reforms, and a conservative Orthodox religious philosophy that grounds the country in traditional values and beliefs. What makes the doctrine distinctive and successful is Putin’s ability to ensure order and engineer stability.

The rise of Vladimir Putin was Russia’s response to a decade of social strife, political instability, and economic decay. Plagued by low oil prices, which began in the mid-1980s, the state suffered from large budget deficits, forcing it to go hat in hand to international financial institutions. A poorly planned and executed transition to market economy resulted in the collapse of the ruble in 1994, and to an overall decline in the stock market: in 1998 alone, 75 percent of Russia’s market value was erased. The voucher privatization of medium to large enterprises resulted in economic wealth becoming concentrated in the hands of oligarchs and the siloviki, a group of street-smart individuals with connections both inside and outside the state. Worse, a booming underground economy and a decentralized police force gave rise to violent Russian criminal organizations.

In the context of these domestic issues, Russia’s precarious position was weakened further by Chechnya’s declared independence. A subsequent 18-month-long war, which was widely unpopular with the Russian people, ended with heavy troop losses and the de facto separation of Chechnya. Less than a decade after the collapse of the Soviet Union, a March 1999 poll revealed that 72 percent of Russians surveyed no longer thought of Russia as a great power, while a nearly equal number regretted the USSR’s breakup.

Up until 1998, when he was appointed the director of the Federal Security Bureau (the successor to the KGB), Putin was rather unknown in Russian politics. Thus it was unexpected when Putin was appointed prime minister by ailing President Boris Yeltsin, who himself was dealing with the fallout of the Russian apartment bombings in the wake of the renewal of the Chechen War. At the end of 1999—seemingly out of nowhere—Yeltsin stepped down and appointed Putin as acting president. Few believed that he would last.

As acting president, Putin stepped up the Chechen War, playing into the public’s fear in the wake of the apartment bombings. With these accounts now broadcast across television and talked about in print, many working-class Russians were won over by Putin’s law-and-order approach. In contrast to the First Chechen War, which was fought on the ground with many casualties, the second war relied on bombs, reducing the Chechen capital of Grozny to rubble. Putin then sought to restore the financial stability of the Russian state, balancing the budgets by cutting government spending, paying off public debt held by the IMF, and putting an end to the state’s cycle of taking Western loans. Putin initially achieved support for this austerity by embracing the mentality of Russia as a besieged fortress under imminent threat from the West and Islam, both of which he said sought to destroy the country. The stability that Putin brought to Russia, which was sorely missing during its flirtation with democracy during the 1990s, resulted in a landslide win for him in the 2000 presidential election.

In the subsequent two decades, the perception of stability has been the hallmark of Putin’s rule. Much has been made of rising oil prices, leading to filled state’s coffers, honored pensions, and growing sovereign wealth funds. By contrast, little attention has been drawn to the vast wealth disparity in the country. Russians have often delegated authority to Putin, instead of distributing power across different institutions like the Duma (Russia’s legislature) or the judiciary. Additionally, assimilative policies, such as a ban on religious and ethnic parties and the introduction of Orthodox culture into schools, have won votes from ethnic Russians; like Putin, many of these voters wish to grow the country’s population without substantially increasing immigration. So far, it appears that Putin is struggling to deliver on this promise, although state-sanctioned information distortion has helped to cushion the blow. Territorial integrity has also been preserved by terminating power-sharing treaties between the federal government and autonomous regions.

The repercussions of these decisions remain to be seen. Regular Russians still have a lot of latitude in their day-to-day lives—the average Russian spends nearly four hours a day watching television, prompting a boom for Russian film and television production. As a result, many distracted viewers are unlikely to pay attention to concerted efforts by Putin, and those around him, to eliminate dissidents and silence the opposition. The stakes are high: certain state-controlled industries, such as nuclear technology and armaments, have prospered through exports, benefiting autocrats in the developing world. Furthermore, Russia’s participation in the Syrian Civil War has further added to a “small wars” strategy, giving the perception that the state must continually intervene to curb the growth of foreign radicalism.

Putin is not in a position of complete control. If he were, he would simply change the constitution outright and declare himself “president for life.” But why do that when Putin can just as easily change the constitution through a referendum, seemingly indicating that he is engaged in procedural democracy in principle? Putin’s success, despite the harsh paradoxes of his rule, derives from a doctrine that skillfully projects stability. Until Putinism dissipates, very little will change. And it is impossible to predict what it will take, when it will happen, and what Russia will look like after.