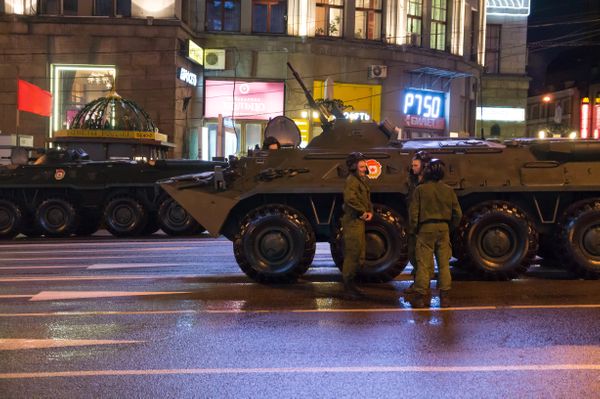 The Kremlin’s loudly announced disarmament of Ukraine has, like most of its other aims in Eastern Europe, little chance of ever materializing.

Russia’s public suggestions to Ukraine and the West over the last year have often been outrageous and even bizarre. Moscow’s demands have included a revision of previous NATO enlargements, limitations on the freedom of Sweden, Finland, and other states to join the alliance, and a so-called “de-Nazification” of Ukraine. The sheer ridiculousness of the Kremlin’s ideas precludes any serious policy-oriented discussion. These proposals are of interest only to contemporary historians, political comparativists, and, perhaps, social psychologists rather than policy shapers and experts.

One of the less fantastic agendas that the Russian leadership has set out for Ukraine is its forced demilitarization. While such actions would be a clear violation of international law, demilitarization is a plan that the Kremlin may ultimately be able to implement. Demilitarization could potentially go beyond dissolution of most or even all of the fighting units of Ukraine’s ministries of defense and interior, including an “industrial demilitarization” through the looting and destruction of Ukraine’s arms industry.

Moreover, in a future peace deal, Ukraine might be forced to agree to certain limitations on the future acquisition of certain weapon systems and ceilings on troop numbers, as well as limits on the size and frequency of exercises, the geographical location of its forces, the opening of foreign military bases, international troop deployments on Ukrainian territory, and certain military partnerships and cooperation with other states. Such future restrictions would place severe constraints on the post-war security policies of Ukraine.

The Kremlin propaganda machine is reporting about a current Russian “demilitarization” campaign. Putin’s regime and the Kremlin-controlled mass media are suggesting to the Russian population that a disarmament of Ukraine via massive bombing is already under way. Russia’s ongoing “special operation” is indeed targeting not only civilians, but also Ukrainian military units, installations, supplies, and factories.

However, Ukraine is heavily militarizing at an ever greater speed. Much of Ukraine’s adult male, and parts of its female, population are being armed and trained for combat, if not already in battle. The country is being flooded with increasingly varied, sophisticated, and heavier weapons—either domestically produced or imported. Some of Ukraine’s new armaments oddly come from Russia, as Ukrainian soldiers have captured or found a variety of Russian weapons left on the battlefield. In some cases, Russian soldiers have simply abandoned their vehicles, guns, or equipment and left them in Ukraine.

Circumstances and Types of Demilitarization

Should the Kremlin be afforded the opportunity, the demilitarization of Ukrainian territory could become a central agenda of Russian policy vis-à-vis Kyiv. As a material rather than an ideational, legal, or political aim, it is a less elusive project than Russia’s mythologized “de-Nazification” of Ukraine’s pluralist society. Demilitarization could become an existential issue for Ukrainian sovereignty—a nation with a past heavily marked by violent confrontations.

There is a long tradition of Ukrainian armed self-defense that builds on powerful historical myths partly based on facts, but also partly rooted in hagiography and heroizing mythology. Among other things, this tradition refers to the political autonomy and military prowess of the pre-modern Ukrainian Cossacks—a self-governing peasantry located primarily in central, southern, and eastern Ukraine. It also draws on the primarily western Ukrainian armed nationalist movement during World War II, and particularly the anti-Soviet fighters of the Ukrainian Insurgent Army (UPA).

In today’s Western Ukraine, there is still a strong historical memory of the UPA’s resistance that is cultivated both verbally and visually by the elites and the wider population of Galicia, Volyn, and other regions. In 2014, a large, initially semi-regular or irregular armed volunteer movement emerged in response to Russia’s covert invasion and pseud-civil war in the Donbas. The spontaneously forming battalions often referred in their self-definition to Cossack, UPA and similar past examples of Ukrainian armed resistance against invaders.

The experience of the broad social volunteer movement during the Euromaidan, which turned violent towards its end, and the first high-intensity phase of the Russian war against Ukraine in 2014 and 2015 left a mark. Large parts of the population were involved in the support for the volunteer fighters. The practical experience and historical learning during this period were among the reasons why the Kremlin’s 2022 Blitzkrieg scenario did not unfold. While the Russian covert operation to annex Crimea had gone smoothly, eight years later Ukrainians’ mobilization and defence experience had grown to a degree as to make a repetition of Moscow’s 2014 success in southern Ukraine impossible in northern and eastern Ukraine.

There are two potential pathways for a Russian effort to demilitarize Ukraine, beyond the destruction and capture of equipment that is already taking place. First, there may be an attempt to achieve an “endogenous demilitarization,” meaning a form of disarmament that is, for one reason or another, implemented by Kyiv itself. Alternatively, Moscow might try to impose an “exogenous demilitarization,” using its own or proxy troops and police forces stationed in Ukraine. It is doubtful, to be sure, that either scenario ever materializes. Nonetheless, both options may be considered in Moscow.

The Ukrainian government would not, of course, voluntarily participate in its own national demilitarization. However, it might be forced to agree in writing to conduct a demilitarization campaign following, for instance, an unconditional capitulation. There are two major instruments by which Moscow could achieve such a victory.

First, Russia could step up its already large-scale bombardment to a sort of carpet bombing of Ukrainian cities, not least the city of Kyiv, until Ukraine capitulated. Alternatively, it could deploy a nuclear warhead or other weapon of mass destruction (WMD) on or over Ukrainian soil, perhaps even within a major city. The first approach would follow the Allies’ strategy of 1944–1945 to force Nazi Germany into an unconditional capitulation. The second would be an attempt to emulate the effect of the US deployment of atomic bombs over Hiroshima and Nagasaki in August 1945.

The first of the two strategies would, for the reasons discussed below, be less politically costly for Russia than the second. It therefore appears, all things considered, somewhat more likely than the second. In fact, large-scale bombing of civilian infrastructure is already under way, as could be seen in Mariupol and some smaller settlements, reviving a Russian approach practiced in the Second Chechen War of 1999–2000 and Moscow’s so-called counterterrorism operation there that continued until 2009. It is also already reminiscent of Russia’s military involvement in the Syrian Civil War in 2015–2018.

The use of some kind of WMD in Ukraine is also possible but would only further stigmatize Russia in the West and trigger an unspecified reaction, not least from the US. It might also alienate quasi-neutral geopolitical players such as China and India. Both states abstained in the March 2022 United Nations General Assembly vote condemning Russia’s official invasion of Ukraine, which began on February 24, 2022. Such neutrality could become less easy to justify if Russia were to deploy one or more WMD in Ukraine.

An official Ukrainian capitulation could follow if tens or even hundreds of thousands of Ukrainian civilians were killed by carpet bombing, the explosion of a nuclear warhead, or another form of mass murder, such as with chemical or/and biological weapons. A capitulation document could be signed by either the current President and Government of Ukraine, or a new leadership. In the latter case, in assessing the prospects for an attempted demilitarization, whether a new government had some degree of legitimacy within Ukraine or was a mere puppet regime installed by Russia, and thus unrepresentative of Ukrainian society, would be critical.

A fully legitimate old, or an at least moderately legitimate new government, would have more authority to peacefully implement varying degrees of demilitarization. It could also count on some level of popular cooperation. A puppet administration, by contrast, would not be much different from an occupying regime, apart perhaps from providing Moscow with some degree of plausible deniability. It would have to enforce demilitarization by state-terroristic means, such as draconian policing of cities, summary shootings, forced displacement/deportation, hostage taking, show trials, and concentration camps.

A probable outcome of any serious attempt by a fully or semi-legitimate Ukrainian government to demilitarize Ukraine would be civil conflict, strife, or war. Not only in western Ukraine, any serious demilitarization attempt by Kyiv would encounter resolute rejection and even armed resistance. The interstate conflict between Russia and Ukraine could turn into a confrontation between relatively defeatist and more patriotic Ukrainian groups, localities, regions, and/or subcultures.

A Russia-imposed disarmament by an occupying or puppet regime would appear to be an even more problematic scenario. Ukraine’s disarmament by Moscow or a Moscow-installed government in Kyiv would demand: (a) a full military conquest by Russian troops of those Ukrainian territories that are to be demilitarized; (b) a permanent deployment, over those parts of Ukraine, of numerous military and police personnel with a large material and institutional infrastructure; and (c) state-terroristic enforcement of demilitarization through various forms of repression, including executions, internment, torture, and deportation.

Only at first glance does an exogenous demilitarization appear to be the more feasible form of disarmament. It does not demand a difficult-to-achieve deal with a legitimate Ukrainian government, to be sure. It could, in theory, be initiated unilaterally and swiftly following a hypothetical victory. However, it would de facto mean a continuation of Russia’s war in Ukraine against irregular combatants supported by the local population.

An endogenous demilitarization would presume cooperation by a fully recognized—or at least semi-legitimate—Ukrainian regime. However, it would be hard to achieve such cooperation. Large-scale mass murder of Ukrainian civilians through carpet bombing and/or the deployment of a weapon of mass destruction might force Ukraine into capitulation, but the foreign political and economic costs of such behaviour would be high. Even so, if a Ukrainian capitulation were achieved, subsequent cooperation of a fully or partly legitimate Ukrainian government in the disarmament process would still be difficult for Moscow to ensure.

An exogenous demilitarization, by contrast, would not demand elaborate and risky preparations. In theory, it could be a unilateral measure taken by Moscow and would “only” need a traditional Russian military victory to initiate. Following a hypothetical conquest of Ukraine, however, it would be highly challenging for a Russian occupation or puppet regime to implement demilitarization—even if attempted by draconian means.

Ukraine’s strong tradition of collective self-organization and self-defence means that, following a formal Russian victory, armed resistance to Moscow’s rule would continue. Irregular armed groups would resist demilitarization with the help of the local population. In conclusion, neither an endogenous nor an exogenous demilitarization of Ukraine is ever likely to happen.

Andreas Umland is an analyst with the Stockholm Centre for Eastern European Studies (SCEEUS) at the Swedish Institute of International Affairs (UI).

Jakob Hedenskog and John Zachau of the SCEEUS made useful comments on an earlier version of this text. Responsibility for any remaining imprecisions, however, lies with the author.