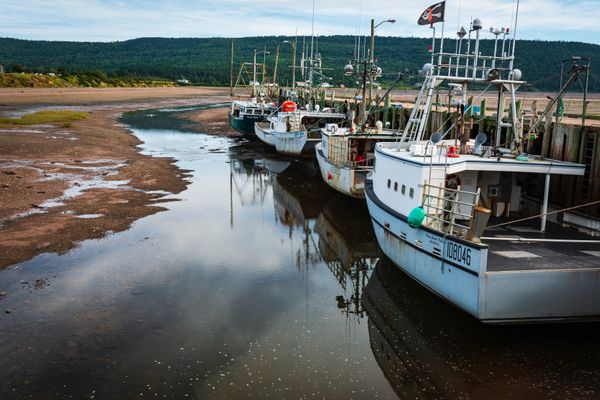 The Hypocrisy of Demanding Moderation from Indigenous Communities

On one end, an armada of industrial fishing ships. On the other, a few hundred Indigenous lobster traps.

The difference in scale is obvious at first glance. Yet, in September 2020, commercial fishers in Canada sparked a conflict on the nation’s east coast by arguing that the Mi’kmaw Fishery in Nova Scotia causes severe harm to the local environment. Even though Indigenous peoples have specific rights in Canada from centuries-old treaties and have been fishing legally for a “moderate livelihood,” non-Indigenous fishermen fired flares at Indigenous crafts and pulled up lobster traps meant to serve First Nations communities. It is estimated that each Indigenous boat lost around CAD$5,000 worth of traps as a result of these activities.

There seems to have been no recognition by non-Indigenous fishermen concerning their environmental impact. While Indigenous pursuits of livelihood are done in moderation, commercial fisheries are generally less restricted and achieve much larger fleet and harvest sizes. When further contrasting the sizes of their respective fisheries, Sipekne’katik First Nation Chief Michael Sack argues, “If the commercial groups are so concerned about conservation, maybe they should limit the number of traps they’re setting.”

“If the commercial groups are so concerned about conservation, maybe they should limit the number of traps they’re setting.”

The Mi'kmaq people (Mi’kmaq is the term used as a plural for Mi’kmaw) reside in Atlantic Canada and the US Northeast. The Mi’kmaq people form a substantial community of approximately 60,000 people who mostly live on reserves along Canada’s East Coast. They traditionally survive using the resources of the land, traveling to the coasts during the warmer months and inland in winter and relying on harvests, shellfish, and mammals for food, clothing, and tools. However, there have been rising tensions between the Mi'kmaq Nation and other fishers in the region over the past two decades. In one instance, Mi’kmaw fisher Donald Marshall was convicted of fishing out of season in 1996, but the Canadian Supreme Court overturned the decision, citing rights given to Mi’kmaq people by previous treaties. Despite this decision, tensions have flared throughout the years, with the conflict from September 2020 as only the latest example.

Unfortunately, the Mi’kmaq people are not the first or only victims of assault and disruption by non-Indigenous industries and organizations. There is a long history of commercial conflicts between corporations and Indigenous peoples in Canada. In 1991, the Algonquin people of Barriere Lake were angered by the Quebecois and Canadian governments’ decision to allow logging by the Eacom, Louisiana, and Resolute companies without prior consultation. More recently, long pipelines from companies such as Enbridge and Kinder Morgan have drawn criticism for violating First Nations treaties and polluting both land and watersheds. The excavation of Alberta’s oil sands, sought after for their monetary value, also pollutes Indigenous peoples’ drinking water. In each case, corporations, with their industrial and financial might, overpower small communities of First Nations and Indigenous peoples across Canada.

Herein lies the heart of Canada’s double-dealing: under the law, Indigenous peoples are often only given the right to hunt and fish in their traditional ways to seek a “moderate livelihood.” Yet, their lands are simultaneously used and abused by corporate infrastructure that generates millions for the rich. The Canadian government openly enables commercial industries that accumulate wealth while barring Indigenous communities from the same opportunities. While Indigenous peoples moderate their consumption, large corporations are protected to extract in excess, leading to a constant negative sum game for Indigenous communities.

In Canada, limitations placed on Indigenous peoples in the name of moderation impact their ability to pursue better quality of life. First, the term “moderate livelihood” is poorly defined and misunderstood by both government and society. This is further compounded by the various voices arguing over the creation of a legal definition for such a crucial term. The uncertainty surrounding “moderate livelihood” creates discrepancies between Indigenous and commercial industries, hence the long history of conflict between the two groups. For example, Indigenous peoples are typically given rights to land, waters, and animal populations that are protected from non-Indigenous industry in recognition of their traditional activities. However, industrial fishers may not appreciate the legal and cultural history behind this arrangement, viewing it as unfair treatment by the government and a threat to sustainability. There is also a lack of clarity on what can and cannot be sold by First Nations fishers. This has led to further conflict between the two sides with allegations that non-Indigenous fishers have intimidated buyers into not doing business with First Nations fishers.

The ambiguity surrounding what can be harvested and what can be sold means that it can be difficult for Indigenous peoples to build wealth or even acquire basic necessities. Furthermore, it raises concerns over the role of government in restricting Indigenous communities. Why are the restrictions of moderation placed solely on Indigenous peoples? Who even can define the meaning of a moderate livelihood?

While these questions go unanswered, current policies will continue to punish the most vulnerable. Culturally, Canada’s Indigenous peoples have long placed a much larger emphasis on sustainable living than the rest of the nation. Sustainability remains a salient point of concern for Indigenous communities because of their direct relationship with their surrounding ecology: some rely on their local environments for necessities such as food and water and suffer the immediate consequences of unsustainable behavior. This is in stark contrast to urban centers, where inhabitants can find anything on a whim at a local store and are generally oblivious to the ecological processes that support them, creating an overall sense of apathy towards moderation.

Contrast this with Canada’s capitalist corporations, such as its large-scale fishers and oil-transporting companies. While the Canadian government reserves the right to place limitations on fisheries for the sake of sustainability, there are no limits to moderation in terms of monetary value—that is, fishers can fish to accumulate wealth so long as it does not permanently scar the local environment too drastically. Many of these policies are designed to maintain fishery resources by setting quotas on catches to match reproduction rates or by limiting the sizes of caught animals so that they are given an appropriate chance to reproduce. This sometimes leads to free-for-alls between companies to generate revenue. There are usually fewer or even no limitations on groups like oil companies: when is the last time one has heard of a limit placed on the Albertan oil sands? It seems ironic, then, that the Canadian government seeks to limit Indigenous communities in the name of the environment.

With no limits to pollution, companies acting in Canada have had little regard for the environment. Unfortunately, this most heavily impacts Indigenous peoples in the country. While the rest of Canada gets better Wi-Fi and clean running water, Indigenous communities’ food sources and methods of storage are changing. Sea ice, a symbol of food, learning, and memory for the Inuit, is disappearing. Their ability to safely learn from their elders, to gather food, and to survive is compromised. With their environments changing so rapidly, Indigenous peoples have struggled to keep pace. When examined through this lens, the question arises: what does the Canadian government value? It is not just in Canada that this is happening; rather, the same hypocritical attitudes and same injustices are pervasive across the planet. Globally, Indigenous peoples are disproportionately impacted by deforestation, climate change, rising sea levels, and so on, while also battling diminishing resources.

Warning signs have been raised to slow this trampling of Indigenous cultures. Most notably, the United Nations reports that climate change is a potential threat to the very existence of Indigenous peoples around the world, despite them contributing the least to climate change and playing a crucial role in sustainability in many ecosystems. The report cites Indigenous peoples from all walks of life having to change their traditions as a result of climate change, from Bangladeshi villagers who make floating gardens to avoid floods to Central and South Americans planting cassava in lands, which would normally be too wet. Declines in caribou and elk populations in Europe and North America mark the loss of a vital traditional food source. These changes are so drastic that the United Nations argues that climate change must be viewed as a human rights issue.

It is not that society doesn't know climate change is an issue; more than half of Canadians are willing to sacrifice monetarily to combat it. However, the problem may be systemic or cultural. In Indigenous communities, resources are gathered directly from the environment, and both physical goods and monetary value stemming from their labor can be pooled and distributed directly to individuals. The systems governing much of the rest of Canada differ substantially. Much of the economic value produced by human labor goes into the pockets of investors and CEOs, while the physical goods are spread out among a larger population. While smaller communities can act responsibly because they distribute the benefits of commercial activity more equitably, the executives at large corporations are continually incentivized to harvest more for their bottom lines while consumers demand high quantities of goods. It is difficult to imagine the systemic change necessary to prompt greater action on sustainability.

Canada’s treatment of its Indigenous communities does leave room for a small glimmer of hope. Indigenous peoples can show broader society how to live more sustainably by implementing shifts in consumption and stewardship. In some contexts, the government has been willing to place more stringent limitations to enforce moderation, such as with carbon taxes and wealth taxes. This can open the door for a global shift in attitude, in which governments and citizens come together to work towards environmentally-responsible action wherein government policy mirrors the moderation of the Mi'kmaq people rather than extractive capitalists.

Justin Ye is a staff writer for the HIR. Justin is interested in tech, politics, and environmental activism.