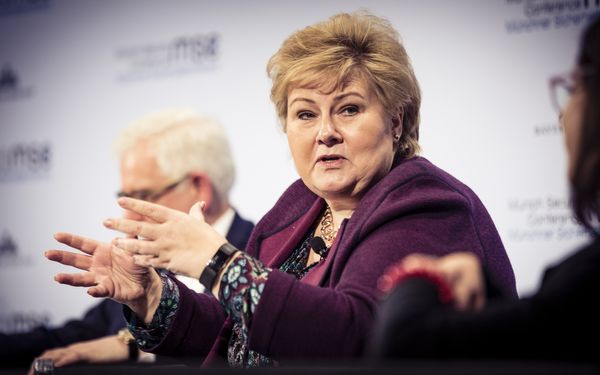 Scandinavian Stability for a World in Flux: A Conversation with Norwegian Prime Minister Erna Solberg

Erna Solberg has served as Prime Minister of Norway since 2013, longer than any other Conservative prime minister in the nation’s history. After Solberg’s unyielding approach earned her the nickname “Iron Erna,” she pushed the Conservative Party toward a more pragmatic vision for Norway. Solberg spoke with Garrett Walker in May.

In the wake of COVID-19, different management styles have emerged in different countries. What are your government’s primary considerations as you face this crisis? And what have you learned about international approaches to leadership?

There is a high level of trust between the general population and the authorities in Norway. However, the coronavirus pandemic has created a challenging situation in our country as well. We have been using the government's almost daily press conferences to inform the public and explain the reasons behind the measures we have introduced. Over the past two months, I have held two press conferences for children. We have used the Norwegian concept of “dugnad,” or community help, to highlight the fact that we must all do our part for the common good.

Norway's high degree of digitization ensures that we can interact effectively at all levels of society. This gives us an advantage in a situation where people need to work from home and keep their distance from others. Norway's low population density is another advantage in this situation.

We are currently opening up society again cautiously and gradually. We are still emphasizing the importance of following the advice of the health authorities on social distancing, good hand hygiene, and staying at home when we are ill.

You have worked extensively with the United Nations on the Sustainable Development Goals (SDGs). Five years after their enactment, what do you see as their greatest successes and ongoing challenges?

Achieving the 2030 Agenda is an immense challenge. At the same time, it offers opportunities to address the root causes of poverty, marginalization, and climate change. Many countries report that resources have been reallocated and tax systems adjusted to improve progress towards the SDGs. Issues like gender equality, food security, health, education, climate change, and job creation are higher on national agendas. This has all been done in only five years, which I think is quite an achievement.

However, the coronavirus pandemic has shown us that the gains we have made can easily be lost again. It has exposed fundamental weaknesses in our global system. It has shown how the prevalence of poverty, inadequate health systems, lack of education, and lack of global cooperation can exacerbate a crisis. There can be no doubt that we are all dependent on each other. If one country fails to combat the virus, it will continue to pose a risk to the rest of the world as well. The need to work together goes to the very core of Agenda 2030. This is why we are investing in developing vaccines against COVID-19, why we proposed to UN Secretary-General António Guterres that a new UN multi-donor trust fund be established to assist countries in mitigating the long-term effects of the pandemic, and why we are increasing our assistance to the poorest countries in Africa and funding for global health and humanitarian efforts.

I believe that if we manage to maintain and build on the innovative partnerships and the global solidarity that this crisis has spurred, we have a unique opportunity to adjust our course on several issues. In the words of the UN Secretary-General, we must “build back better,” guided by the SDGs.

Given that you served in the NATO Parliamentary Assembly, how do you understand the future of the transatlantic relationship? Is there still room for multilateralism on the international stage?

The transatlantic relationship has been crucial to peace and prosperity on both sides of the Atlantic since just after the Second World War. We encounter many challenges that we must tackle together. The current pandemic is only the most recent example. There is no contradiction between multilateralism and strong, responsible states. On the contrary, democratic and efficient states are the building blocks of multilateralism. NATO is an excellent example of this: when each country takes its own security seriously, we become stronger as an alliance. Over the past weeks there have been digital NATO meetings, and on March 27, North-Macedonia was adopted as a new member of the alliance. I think this shows that NATO is relevant and that it is able to adjust.

The ongoing pandemic is only the most recent example of the need for multilateralism, solidarity, and international cooperation to solve global problems. Norway is a strong supporter of the United Nations—both politically and financially—and as a consistent long-term partner we are seeking a seat on the UN Security Council for the period 2021-2022.

Norway leads the world in many metrics of gender equality, an issue close to your heart. Why do you think Norwegians have been so supportive of women’s empowerment, even compared to other progressive European populations?

Norway is an egalitarian society with a high level of social equality. Women have traditionally held a strong position. Fishermen and sailors needed women who could take responsibility at home when they were absent for long periods of time. In addition, it has long been considered important for Norway’s political system to be representative of the whole population. Ever since the 1980s, around 40 percent of the members of our parliament have been women. Women politicians have shone a spotlight on women’s everyday lives and the need to find a good work-life balance.

We also know from experience that gender equality is smart economics. Equal access to high-quality education is vital for achieving gender parity in the labor market and equal participation in society. Failure to promote women's participation in paid work means wasting half of a country's skills and capacity. Therefore, we will not be able to respond successfully to the pandemic or recover from it if women are left out of the equation.

Your party has traditionally taken a strong stance on human rights, notably supporting Chinese dissident Liu Xiaobo in 2010. After the subsequent diplomatic freeze with China, what drove you to reopen relations? And how do you balance national values with pragmatic statecraft?

It is important for Norway to have a working relationship with China, and we welcomed the resumption of normal relations. Support for human rights is an integral part of Norway’s foreign policy. Our relations with China have expanded significantly since 2016, and our bilateral dialogue includes discussions on issues about where we disagree. The balance between fundamental values and pragmatism is too often portrayed as a binary choice. This kind of balancing act is never easy, but our starting point is always an analysis of what is in Norway’s interests in both the short and the long term.

Oil and gas production make up about 20 percent of Norway’s economy. Given that energy prices have plummeted in recent months, do you have plans to further diversify Norway’s financial systems?

The Norwegian economy is currently experiencing a historic economic downturn due to infection control measures, a high level of uncertainty, the global recession, and lower oil and gas prices. The government has introduced a range of measures to mitigate the economic consequences of the pandemic.

To address low oil and gas prices and control the spread of the virus, oil and gas companies are currently reducing planned investments and non-critical maintenance. The Norwegian government has adopted measures to maintain activity in the oil and gas industry and the supply industry, including temporary targeted changes to the taxation system. Furthermore, the government has decided to cut oil production to help stabilize the oil market.

We have known for a long time that oil and gas production and related investments would decline over the coming decades. Successive governments have therefore taken steps to diversify the economy and avoid the resource curse, and this approach has been a cornerstone of Norway’s economic policy. Norway has a petroleum wealth management system that delinks petroleum spending from petroleum earnings via a fund invested in financial assets abroad. This insulates the domestic economy from volatility in oil and gas prices. The fiscal framework also provides us with the fiscal space necessary to counter economic setbacks like the one we are currently experiencing.

You have long been an outspoken advocate for refugees and displaced people across the world; what relationship do you see between that work and your efforts to limit immigration to Norway?

Norway’s overall aim is to save lives, alleviate suffering, and protect human dignity in humanitarian crises. We put people’s needs and vulnerabilities before other considerations when responding to humanitarian crises. The number of people who are forced to flee their homes because of conflict has increased dramatically in recent years. Regrettably, there is a growing gap between global humanitarian needs and the resources available. Norway therefore gives priority to the groups who are most in need, including refugees and internally displaced people.

Norway has offered resettlement for 3,000 refugees in 2020. The COVID-19 pandemic is causing delays in all global resettlement activity, and this will also affect our program.  Norway will continue to resettle refugees beyond 2020, following annual budget processes to determine the quota. Relative to population size, Norway is one of the countries in Europe that provides the largest number of resettlement places.

However, resettlement is a last resort and the most costly option. To find employment in Norway, people generally need high qualifications and a good command of Norwegian; there are few unskilled jobs. This makes it difficult for many people to find a way into the labor market. Ending up without work and relying on benefits—in permanent poverty—is not a good prospect for anyone. This is why Norway’s approach is, wherever possible, to provide refugees with assistance in host countries near their countries of origin.

Despite your party’s desire to join the European Union, only about three in ten Norwegian citizens favor full EU membership. In the future, how do you think Norway can maintain strong relationships on the continent without representation in Brussels?

Although Norway is not an EU member, we participate in the single market through the Agreement on the European Economic Area (EEA). This gives Norwegian companies the same market access as EU companies, and Norwegian citizens the same rights as EU citizens to travel, study and work in the 30 countries of the European Economic Area. Norway is also an associate member of the Schengen Area, so that Norwegians enjoy passport-free travel in Europe.

The practical differences between EU membership and EEA membership are therefore limited, for both businesses and citizens. This may also help to explain why support for the EEA Agreement is at an all-time high, whereas support for EU membership has declined.

I support EU membership because it would give Norway a seat at the table where much of our continent’s future is decided. However, the EEA Agreement is a national compromise that has served us well for more than 25 years and will continue to do so for the foreseeable future.

The current crisis has strengthened our relations with the European Union. We participate in weekly meetings of the health ministers and ministers of the interior to coordinate the fight against the pandemic. Close cooperation to deal with the consequences of the pandemic will be needed for years to come. This will offer opportunities to further strengthen cooperation arrangements between Norway and the European Union.

The interview was edited for clarity.