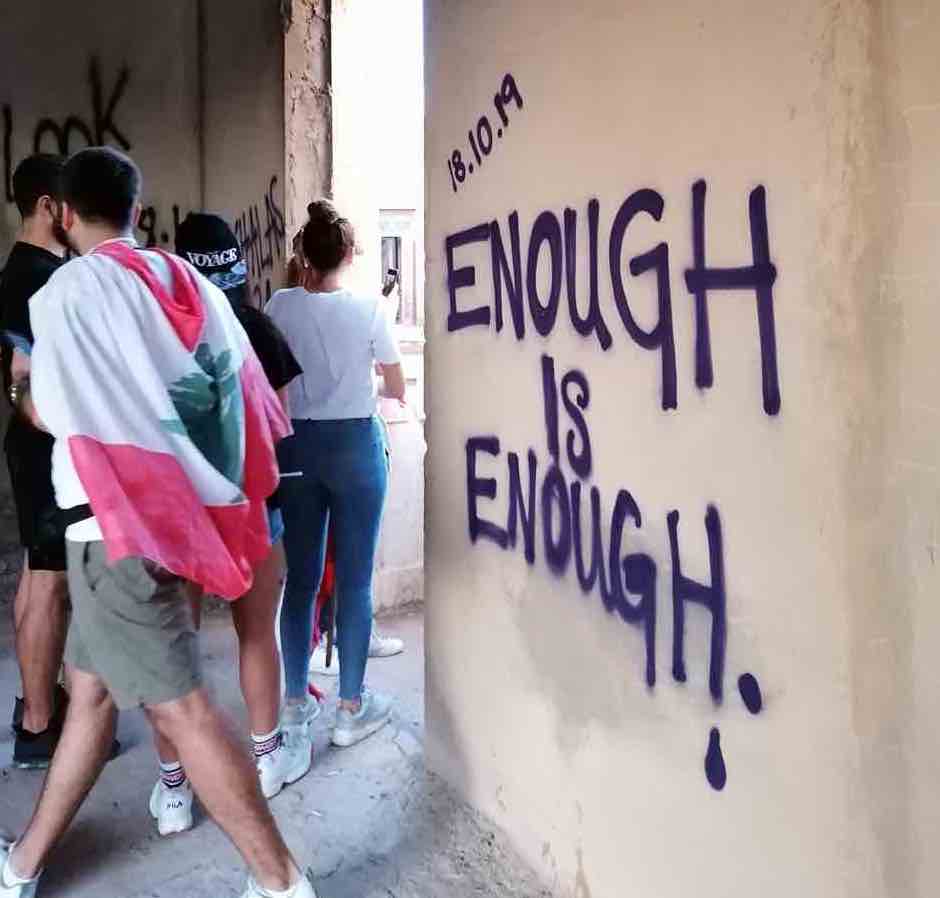 Nour Nicolas is an international associate based in New York. Her fields of practice encompass Investor-State disputes and commercial arbitration. She also acts as the legal consultant for "Kulluna Irada," a lobby group for political reforms based in Beirut, Lebanon. Photograph by Victoria Schill, taken during the October 2019 protests in Beirut.

On June 10, 2020, news broke that two Lebanese-Americans filed a lawsuit in New York courts against the central bank of Lebanon, Banque du Liban (BDL), and three other Lebanese banks for the sum of US$150 million. While outbursts of joy at the possibility of holding accountable the “culprits” of a Ponzi scheme and a defunct banking system might be expected, angst took hold instead for the Lebanese People, who are foremost the holders of the national debt. Groups and associations of depositors have since mobilized in what has become a race against time to register their claims and salvage their deposits.

There are strong reasons to believe that these claims are fundamentally meritorious and legally grounded. Those reasons, however, stand on the other side of equity and justice. In fact, the private pursuit of claims harms the public interest by legally validating the creation of citizenship classes, one of which is worthy of recovering its deposits—consisting of those with the financial means and connections—and one which is not worthy. Such a scenario would amplify economic distress by draining the remaining public resources and would hamper a sustainable recovery path.

Exacerbated by the COVID-19 pandemic, Lebanon’s biggest economic crisis has stripped the country and its citizens of any sense of economic security. Mismanagement of public resources, excessive borrowing from the government, monetization of the deficit, and a well-orchestrated scheme between the Lebanese banks and BDL have substantially weakened the national currency and directly exposed depositors to the risk of poverty. Depositors are frustrated by a rigged banking system that arbitrarily deprives people of their constitutional right of property, a “technocrat” government that allegedly seeks effective reforms, and a shadow justice system that has been involved in score-settling. Therefore, it is unsurprising that depositors have chosen to personally avenge their rights and recover their money before international courts.

Legally speaking, BDL and the Lebanese banks may be civilly and criminally liable for a list of offenses that they have allegedly perpetrated over more than a decade, including conspiracy, fraud, breach of contract, conversion, embezzlement, unjust enrichment, among others. Leaving aside the hurdles that the Bank Secrecy Act may engender, many lawyers believe that any case brought against any author in the banking system may just be a straightforward one.

Amidst the legal proceedings, Lebanon has been experiencing political, economic, and social turmoil. Decay in the quality of democracy, a currency spiraling out of control, and a spike in the price of essential goods have led the Lebanese people to renew their outcries nine months into the start of the protests and take to the streets. The mass outcry confirms the erosion of trust in the state apparatus and the increasing public distress over seemingly lost savings. Lebanon’s recent default on its sovereign bonds only adds to the urgency of private claims, as it directly pits national depositors against much more powerful and deep-pocketed international investors.

Nevertheless, considerations of fairness and equality should prevail over the legal considerations: taking the example of a private company that declares bankruptcy, the general principle of pari passu, according to which creditors are placed on equal footing, is the foremost principle in the law of insolvency around the world. In other words, creditors of the insolvent debtor share the latter’s assets pro rata according to the sums they are entitled to. Deviations from this default rule are only allowed when warranted, i.e. when the creditor is secured. What is leftover, a trustee is appointed to oversee the fair allocation of assets between the disputing claimants, consolidate the entirety of claims filed, and maximize the pot for the collective.

When extrapolated to a bigger scale, that of an entire state, these same considerations become more pressing: the citizens are the depositors, the creditors of the banks, and the holders of the national debt. Social disparities in Lebanon have so far dictated their everyday life and presently threaten to determine their fate. Only the wealthy minority have the financial means (and foreign accounts) to seek and fund lawsuits; an even smaller minority emblazon a second or third passport that enables them to turn the lawsuit into an international one; and only the most well-connected in the judicial arena can simply skip the entire judicial process and obtain their order against the banks. On the other side of the social spectrum, over 75 percent of the population has been thrust below the poverty line, with no relief package on the horizon, no financial or economic privilege to sweep them through the crisis, and only the streets as a means to recover their money.

Critics will probably deny any analogy between the case of a private company’s insolvency and the present case of private creditors by raising the following arguments. First, neither BDL nor any Lebanese bank has entered bankruptcy proceedings; assuming otherwise, BDL and the banks are distinct entities than the Lebanese state. Contrary to private companies that are regulated by an insolvency law regime, states are not subject to a similar regulation.

While such contentions are appealing, they fail to account for reality. In fact, one of the traits of the financial engineering scheme implemented by the banks was siphoning their assets over to BDL in the form of debt owed by the latter. Essentially, BDL holds the participating banks’ assets, ergo the depositors’ money. It follows that maintaining any formal barrier between the state and the banks is purely delusional, since the nation’s wealth and the depositors’ property are ultimately controlled by BDL, in contravention of all meticulously crafted and internationally mandated guidelines on good governance, transparency, supervision and risk management. To add salt to injury, the clock is ticking on BDL’s foreign currency reserves which are on the verge of complete depletion.

Equity is equality. The handful of private claims or class actions filed by resourceful Lebanese citizen against BDL and/or the banks generally, dilutes the less fortunate depositors’ par in the pot, and by the same token, magnifies the economic, financial and social turmoil. The same set of rhetoric has led world-renowned economists to crusade for the interests of national citizens over those of foreign investors: the overriding idea is to protect the state’s public goods and promote its use in the public interest.

Some may argue that the corruption and mismanagement concerns as a justification for the need to personally proceed with legal relief. The current government’s failure to cleanse clientelism tendencies and to transition into a purely merit-based civic society explains persisting distrust towards the institutions. However, wiping out the last thread of the public wealth cannot serve as a fair solution. The only just remedy is a collective one, namely an orderly restructuring of the public debt. Such a solution requires sincere, competent and focused efforts from all authorities, that should aspire trust not only in citizens but also the international community, upon which substantial rescue packages and a sustainable road to recovery depend.

It is pivotal to remember that the stakeholders are larger than the number of individuals racing to bring claims against BDL and the banks. The latter cannot operate at the expense of the former. This is not to say that the banks merit impunity nor that they will walk away free. A combination of a strict restructuring plan (with the possibility of nationalization of private banks); a reform of the central bank framework (to improve transparency and accountability); and securing the personal liability of bank executives (including the BDL governor) in their capacity of architectures of a grand fraud scheme may achieve a greater effect than what the present private lawsuits purport to do.

Depositors who are anxious to press claims are not to blame for wanting to protect themselves; rather, the purpose of this article is to demonstrate the implications of their actions and the grim social dimensions at stake. Collective agency is what shook the system back in October 2019, and it remains a cornerstone of any social contract.