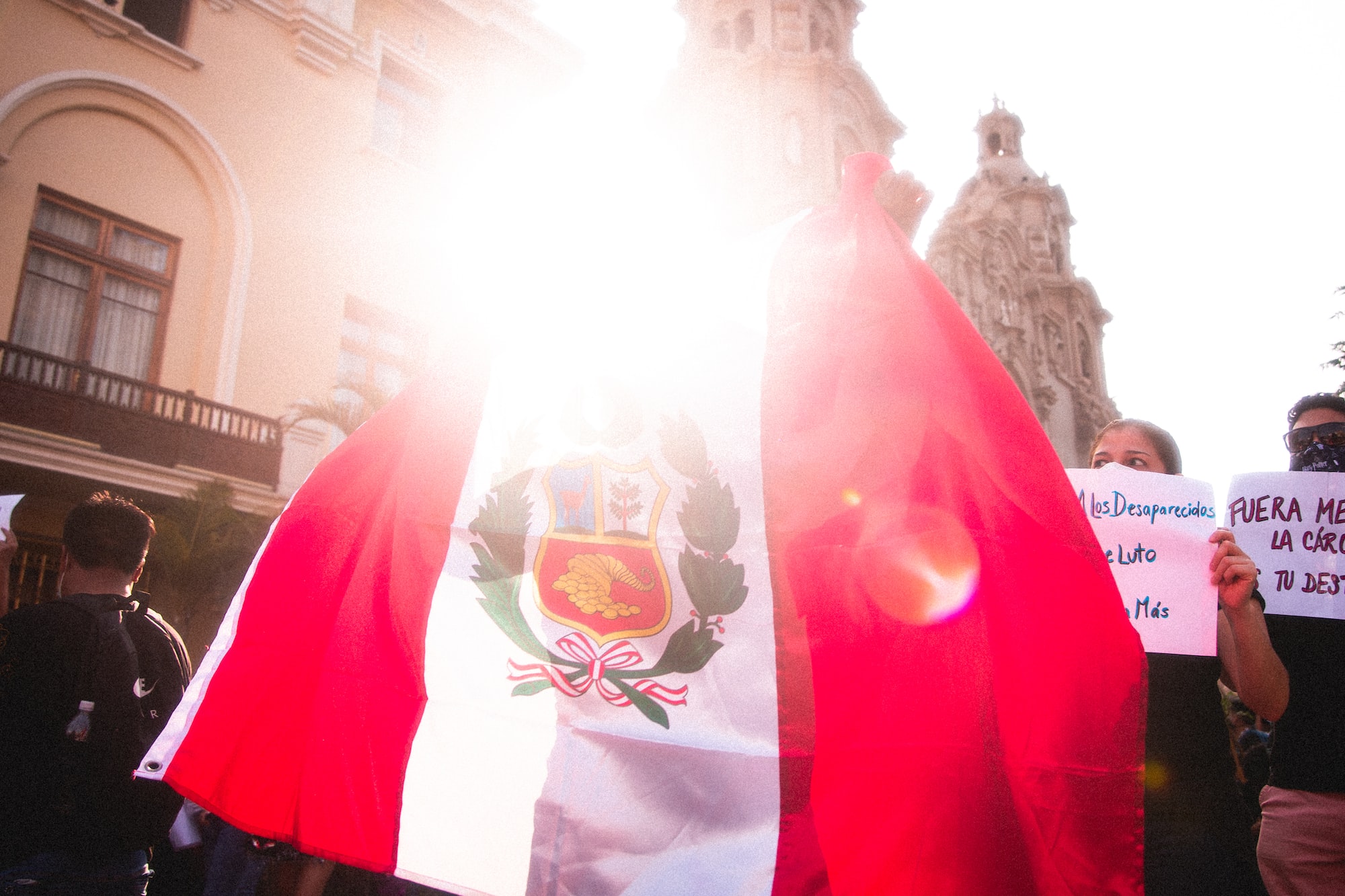 Populism and Peru: How a Dangerous Ideology Caused the Country’s Recent Instability

Tear gas and rubber bullets filled the streets as angry protestors wielded “coup d’etat” signs and chanted “the people reject you!” On November 15, 2020, only six days after being sworn in as the interim President of Peru, Manuel Merino was forced to resign after police killed two protestors in the largest demonstrations since the downfall of then-President Alberto Fujimori in 2000. What began six days earlier with the impeachment of one president ended with the resignation of another and left the future of Peru’s political stability uncertain.

Where did things go wrong for Peru? While some analysts attribute the recent instability to the Odebrecht corruption scandal, it is due in much larger part to populism’s hold on the nation. Peru has, for much of its history, been ruled by a mix of military dictatorships and populist presidencies, neither really more successful than the other. Though the country has enjoyed a relatively stable political environment over the last 20 years, the resurgence of Fujimorism—a right wing populist platform centered around the legacy of former President Alberto Fujimori—has been one of the main causes for the nation’s recent descent to turmoil. It is the entrenchment of populism in Peru that led to the rise of Fujimorism and will likely cause future turmoil, unless adequately dealt with.

When Alberto Fujimori became President of Peru in 1990, the country was facing runaway hyperinflation, an army of terrorists on the brink of seizing national control, and abandonment from the international community. Over the next decade, Fujimori engaged in more and more controversial actions as he took steps to fix the nation’s struggles. He went back on his campaign promise to avoid austerity—economic measures to end long-run budget deficits which often cause short-term problems—and implemented some of the harshest austerity measures the country had ever seen. When the legislature opposed his anti-terrorism measures and began investigating his corruption, Fujimori instigated a “self-coup”, where he abolished the Congress, the Constitution, and the Courts, making him the sole ruler of Peru by decree. To combat terrorism, Fujimori authorized secret death squads and indiscriminate military operations, which led to the deaths of thousands of innocents in the war on terror. Though Fujimori “successfully” ended hyperinflation, eradicated terrorism, and restored foreign confidence in the country, he was impeached in 2000 and is currently serving a 25 year prison sentence for human rights violations.

Despite Fujimori’s conviction, Fujimorism has recently flourished. Fujimorism, the political ideology founded by the politicians in Fujimori’s reformed Congress, is not as well defined politically as ideologies in other countries. Rather, it is a loose set of ideals that reflect Fujimori and his policies which politicians use to appeal to “the marginal sectors of Peruvian society” by rejecting the political establishment and exploiting populist desires. Many who support Fujimorism do so because they define Fujimori’s legacy by his counter-terrorism successes and credit him with reestablishing macroeconomic stability, while those who oppose Fujimorism remember Fujimori for widespread corruption and the killing of innocent civilians.

Because Fujimorism is primarily a cult of personality, its main leader today is Keiko Fujimori, daughter of Alberto Fujimori and the former First Lady of Peru. (Note: in Peru, it is common to refer to Alberto Fujimori as “Fujimori,” and to refer to Keiko Fujimori as “Keiko.” This article will use these names). Keiko rose to prominence in 2006 when she was elected to Congress and received the most votes out of any candidate in the elections. She then founded Popular Force, the main Fujimorist party in Peru, and ran for President in 2011, only to lose the election in a runoff to Ollanta Humala. Keiko’s surge in popularity may at first seem puzzling: why would the daughter of an ex-dictator do so well, especially when a majority of the population fears a presidential pardon from her for Fujimori?

The unfortunate answer is that despite seeming politically stable in recent years, Peru has been anything but, as more and more scandals have rocked the country. The biggest of these is the Odebrecht scandal, involving Brazilian construction giant Odebrecht, which paid over US$30 million in bribes to Peruvian leaders between 2005 and 2015. Former Presidents Alejando Toledo (2001-2006), Alan Garcia (2006-2011), Ollanta Humala (2011-2016), and Pedro Pablo Kuczynski (2016-2018) have been arrested, put under investigation, or killed in connection to Odebrecht. People have turned to Fujimorism due to a lack of faith in the political establishment following Odebrecht and other scandals. As Harvard Professor Steven Levitsky put it, Fujimorism stands today because all other parties have fallen.

Keiko ran once again for President in 2016, this time with a much stronger Popular Force. Despite Popular Force winning 73 of the 130 seats in Peru’s unicameral Congress, Keiko lost to Pedro Pablo Kuczynski (who had not yet been implicated in the Odebrecht scandal) by less than 0.2 percentage points in the national runoff. However, her party’s control of the Congress, combined with the revelation that Kuczynski had received payments from Odebrecht as Minister of the Economy under Toledo, led to the impeachment and resignation of Kuczynski in March of 2018, making Martín Vizcarra, first Vice President of Peru, the new President of Peru.

War with Congress and a New Wave of Populism

Upon inauguration, Vizcarra made it his goal to rid the country of corruption. After sparring with the anti-reform legislature for 18 months, he used his constitutional powers in September of 2019 to disband the legislature and call for new elections; this is allowed under the Constitution if the legislature passes two votes of no confidence against a Minister or Cabinet. The resulting special Congressional elections saw a large scale rejection of the political elite—including Popular Force—as traditional political parties were replaced by smaller parties that promised social justice and the end of inequality. Analysts attributed the shift in power as a populist reaction to corrupt traditional parties, with the resulting Congress proving “even more antagonistic” to Vizcarra due to their populist stance on COVID-19 legislation.

With the removal of the Fujimorist Congress and the installation of Vizcarra’s new populist Congress, it is safe to say that Peru is experiencing a new wave of populism. Or is it? Many in Peru are constantly dissatisfied with the political process. When Merino resigned and was replaced by Francisco Sagasti (the current President of Peru), protestors took to the streets and called for both a new Congress and Constitution. Populism in Peru is less about the needs one party promises to address and more about how new parties promise to distinguish themselves from old parties. Peru is not experiencing a new wave of populism as much as it is continuing to experience the same populist governance that has existed since 1980 when the last military government ended.

Unfortunately, this means that there is no one party or president that can be blamed for the turmoil in Peru. While this time it was the rise of Popular Force that led to the resignation of Kuczynski, their removal and continuation of political troubles by a new congress proves that populism has entrenched itself in the nation and is bigger than any one movement. Populism’s strength can in many respects be tied back to Peru’s history of military dictatorships—leaders needed to placate the people or they would be overthrown by a new dictator. For Peru to move forward and finally shake off populism’s grip, it needs to convince its citizens that the political process works, and that Congresspeople and Presidents are capable of governing without the influences of corruption.

Vizcarra’s anti-corruption push came to a sudden halt when the Congress voted to impeach him on November 10, 2020, for allegedly taking bribes while the governor of Moquegua. Peruvians everywhere, especially younger Peruvians, protestested what they viewed as a coup d’etat by an illegitimate President to-be: Manuel Merino. Merino had served as the President of the Congress and was next in line for the Peruvian Presidency (as Vizcarra had no Vice Presidents), but was forced to resign after protests turned deadly. Francisco Sagasti, who replaced Merino following nationwide protests, now faces the unique challenge of restoring confidence in the nation’s political process, while elections are only weeks away in April 2021. As one of the few members of Congress that voted to acquit Vizcarra, Sagasti is favored over Merino, but it remains to be seen whether he will finally bring about much needed change in the nation’s political process.

Lessons from Peru for Abroad

Can President Sagasti bring stability to Peru? The answer remains to be seen, but it is clear that populism’s grip on the nation will make any solution difficult. Fujimorism may no longer be a reckoning force but populism and a rejection of the political elite are still strong influences within the country. Peruvians are not sure who they can trust, as even Vizcarra himself, the champion of anti-corruption legislation, announced that he will be running for Congress in the upcoming elections—a move some have claimed is primarily intended to shield him from prosecution for his alleged bribe taking, as Congress is shielded by congressional immunity.

What can be done to combat Fujimorism and other dangerous populist platforms? There are a few good starting points. First, it is essential that the government be legitimate and anti-corruption. Lack of faith in existing government structures is what has often led Peruvians to become disillusioned with the political process and seek outsiders, riding on their promise of change for the common man. A good example of this is the election of US President Donald Trump in 2016, who—among other things—modeled himself as an outsider who would “drain the swamp” and “make America great again.” Second, the people must have their needs met. Populism is a strategy that feeds off making promises to meet people’s needs, no matter how unattainable the promises. Fujimori himself ran on the promise of not imposing austerity measures even though the International Monetary Fund, United States, and Japan all called on Peru to stabilize the economy via austerity. He ultimately walked back on his promise once in office.

Third, strong action may be necessary. Though the dissolution of the Peruvian Congress by Vizcarra in 2019 may be seen as an unnecessary power grab, it was a necessary action to maintain order in Peru. Had the Fujimorist Congress not been abolished, they would have moved to fill the Constitutional Court with those loyal to Keiko and her father Fujimori, potentially releasing both from prison and stopping anti-corruption legislation from passing. Strong action has always been necessary in times of crisis, although what is appropriate in one situation may not be in the next—the abolition of Congress by Vizcarra in no way means that abolishing the Congress is generally a sound tactic.

It is tempting to say that these problems can ail only nations in turmoil. But, Peru has been a leader in Latin America for the last 20 years, as the middle class grew and the economy expanded. Despite its unusually high levels of corruption, Peru is a cautionary tale for other seemingly stable countries.

When dictators and strongmen are removed from power, it may seem that a country is finally healing. But no matter how hard the fall, these ex-leaders will always maintain an influence in politics, whether through their own parties or by breeding populist tendencies. It is critical that leaders around the world take strong action, while keeping in mind the needs of constituents and moving to address national issues before they become all consuming.

Carlos Bejar-Garcia is a Staff Writer for the Harvard International Review. He is an economics concentrator at Harvard University.