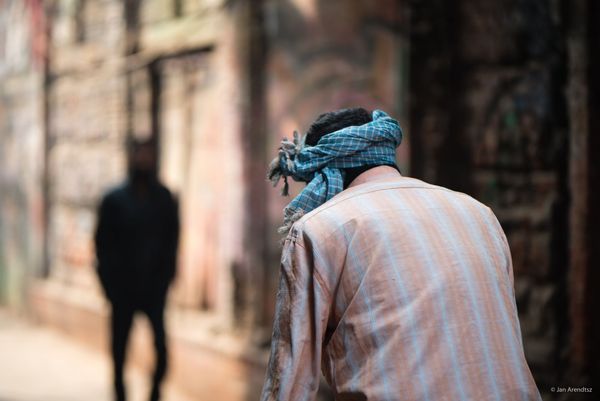 Non-Existent Humans: How Stateless Persons are Forced to Work Informally

Opening a bank account, obtaining a driver’s license, or even getting married—while many of us may take these activities for granted, they are impossible for people without a formal nationality, or so-called stateless persons. Yet, the lack of a bank account is just a minor detail compared to the more severe consequences of being stateless, particularly a lack of access to healthcare, education, or employment. As Isa, a stateless person from the former Yugoslavia, explains, “To be without documents and a nationality is as if you never existed in this world.” Together with at least 10 million stateless people across the globe, Isa belongs to the most vulnerable group of humans, who are often even described as “legal ghosts.” Well-known examples of such demographic groups not having the nationality of any country include the Rohingya in Myanmar or Eastern Europeans after the collapse of the Soviet Union. In recent years, public awareness about the issue of statelessness has increased due to increased efforts by the UN and many international non-governmental organizations. In fact, the UN has even launched a campaign to end statelessness by 2024, identifying flawed administrative procedures, which can be fixed rather quickly in theory, as the main cause of statelessness.

However, this campaign is unlikely to be successful because the public discourse so far has forgotten about the connection between statelessness and informal employment. As part of globalization, what Professor Nina Glick Schiller calls a new “global labor regime” has emerged, in which transnational companies looking for inexpensive labor will incentivize workers to move from their less-developed home countries to more prosperous nations. While the workers, which include both stateless persons and their documented counterparts, undoubtedly hope for a better future, they soon encounter restrictive and complicated administrative procedures in their new country that effectively prevent them from applying for citizenship. With few legal protections, stateless labor migrants in particular then become a pawn sacrifice of the “global labor regime.” This strategy of capitalizing on human defenselessness renders informal labor possible at the expense of stateless persons, particularly in newly industrialized countries in Southeast Asia like Malaysia. Therefore, merely blaming flawed administrative procedures will be insufficient to properly address the issue of statelessness. More creative and comprehensive solutions such as a “transnational labor citizenship,” a type of proxy identity provided through membership in a transnational civil society organization, are needed so that the seeming contradiction of non-existent humans does not become reality for even more people.

How Statelessness and Informal Employment Connect

To understand why the “global labor regime” is even effective at incentivizing low-skilled workers to migrate, it is important to discuss the precarious living situations that many migrants face at home. On the one hand, such insecure conditions are caused by the subsistence-level living standards found in many parts of the world, where low-skilled workers typically receive low wages and have few opportunities to enhance their skills. On the other hand, people’s desire to accumulate previously unimaginable amounts of wealth has crushed the labor and social rights that had been won throughout the 19th and 20th centuries. This capitalist centralization of power and wealth has removed the governmental frameworks and social institutions that once prevented labor exploitation and has served to reinstitute the kind of dispossession that most people have only heard of in the context of the Middle Ages. As a result, many low-skilled workers can only dream about the kind of financial security, labor protection, and long-term security that citizens in industrialized countries have come to take for granted. This phenomenon is well summarized by three scholars from the International Institute of Social Studies, who recently showed how “foreign employment demands to be understood as precarious work undertaken to mitigate existing conditions of precarity at home.” The desire to migrate appears quite natural given the perilous living situations many low-skilled workers find themselves in.

It is exactly these push factors, which are driving people with low levels of education out of their home country, that the new “global labor regime” profits off of in order to meet the increased demand of low-wage labor caused by globalization. As the global market increasingly demands faster production of consumer goods at lower prices, large companies can only stay competitive internationally by reducing workers’ wages. Additionally, the significant demographic changes in many industrialized nations have shrunk these countries’ populations and domestic labor supplies, forcing them to increasingly depend on low-wage migrant workers. Yet, national governments and large companies have to actively cooperate on an informal level to ensure that these migrant workers can consistently be employed at a comparably low price. This is where the idea of a “global labor regime” comes in. Scholars have coined this term to describe the mutual effort of governments and companies to exclude particularly stateless labor migrants from access to citizenship. Built on nationalism and seemingly justified by a defense of the modern welfare state, this “global labor regime” systemically keeps migrants without a nationality in statelessness. For instance, governments in East Asia intentionally refuse to adopt more inclusive administrative procedures that would more easily grant stateless migrant workers from Southeast Asian countries citizenship rights as doing so would endanger economic growth. In short, national governments purposely accept the statelessness of migrants so that their economic sector can more easily exploit these people via low-wage labor. This practice is deeply troubling from a human rights perspective because it effectively dismisses the humanity of a nation’s stateless migrant workforce.

This “global labor regime” fundamentally intertwines statelessness and informal employment, creating devastating consequences for the stateless workers who have become the regime’s pawn sacrifice. Without some type of government-issued identification, which thereby systematically excludes them from the formal labor market, stateless people are forced into chronic economic instability. For instance, they are denied access to almost all public-sector jobs within almost all countries since employment at federal or state agencies is generally restricted to citizens. As these public-sector jobs often present a key avenue to getting paid employment, especially for women in Southeast Asia, victims of the “global labor regime” are compelled to carry out cheaper, more dangerous under-the-table work even after many years in their new country. Yet, while ordinary citizens might be able to escape the low-wage sector, stateless persons are rarely able to find paths toward upward mobility. Given that the main mode of acquiring citizenship by birth in almost all Asian countries is by ius sanguinis (based on the nationality of one or both parents), generation after generation is ultimately trapped in a hopeless combination of poverty and obscurity. And, as if this is not enough already, most labor laws do not apply to workers without an official nationality, opening the door for employers to exploit, sexually harass, or even abuse their stateless employees. This is not to mention excessive working hours without overtime pay or the substandard working conditions that have almost become the new normal to many labor migrants. Unfortunately, these are the heavy burdens stateless workers have to bear at their workplace. Within their private life, stateless people similarly have to suffer from countless other examples of marginalization and discrimination.

A particularly heartbreaking example of the type of marginalization that stateless workers are confronted with can be found in Sabah, a Malaysian state in the northern part of the island Borneo. For decades, Sabah’s most crucial economic branches, such as rural oil palm plantations, have massively depended on migrant labor. Yet, as a professor at Hasanuddin University in Indonesia has described, a system of “mutual illegal collaboration” between local politicians, the police, and employers has prevented any provisions that would have granted stateless migrant workers the right to permanent employment. Instead, Sabah’s labor regime has ensured that foreign stateless workers are chained to one particular employer. The victims are people such as Rozita, whose father once came to Sabah as a refugee from the Philippines. Due to a series of family moves, Rozita lost her birth certificate and a copy of her father’s passport, which effectively made her stateless as she has been unable to prove her nationality ever since. By now, Rozita has four children who all lack birth certificates because of their mother’s statelessness. The family is effectively trapped in a vicious cycle of migration, statelessness, and informal employment. As Rozita says herself: “I don’t know how to get documents for my children. I want to go to Immigration or the Police to ask them, but I am scared.” Rozita, like so many others around the world, has become a victim of the new “global labor regime.”

How Solutions Do Exist

Although it might at first seem hard to solve this issue effectively, there is still hope for people like Rozita and her children. Most obviously, stateless workers could become naturalized citizens of the country they currently reside in. This measure would not only boost the worker’s income, but it would also indirectly benefit the host country’s economy through increased spending and demand, which would undermine many nations’ demand for exploitable, low-wage workers. In this sense, improving statelessness determination procedures or granting stateless workers unimpeded access to a nation’s labor market would also contradict the interests of many transnational companies. These are but a few of the reasons for why the current UN initiative, which sees flawed administrative procedures as the predominant cause of statelessness, will most likely not succeed. Instead, a proposal for a “transnational labor citizenship” put forth by Fordham University Professor Jennifer Gordon seems much more promising. Such citizenship would link the permission to enter a country in search of work to the membership in a “cross-border worker association [that would] allow migrants to carry benefits and services with them as they move.” Gordon’s idea has already gained support among numerous scholars who agree that this kind of “proxy citizenship” through membership within a civil society organization would be quite effective if labor organizations are empowered to develop a transnational capacity. For instance, labor movements in Indonesia as well as the Philippines have developed greater organizational capacity in recent years. A combination of political activism from below by civil society and continuing global initiatives from above by the UN could intensify this trend, possibly also spreading it to other Southeast Asian countries like Malaysia or Singapore. If continued efforts by the international community or domestic pressures empower these labor organizations to a sufficient degree, a “transnational labor citizenship” could actually defeat the “global labor regime.” In the end, Rozita and her children might still have a chance.

Although the right to a nationality has theoretically been enshrined within Article 15 of the Universal Declaration of Human Rights since 1948, stories like those of Rozita have shown us how statelessness and informal employment are still possible, particularly within newly industrialized countries in Asia. A new “global labor regime” driven by international competition for the lowest prices purposely denies stateless persons the right to citizenship to ensure that these stateless migrant workers can consistently be employed at low wages. The result could hardly be more catastrophic as humans become a pawn sacrifice that is continuously exploited, sexually harassed, and physically abused. People like Isa and Rozita become legal ghosts, non-existent, without any rights, privileges, or happiness. As the current world fails them, their sole remedy might be a transnational labor citizenship. The stakes could not be higher.