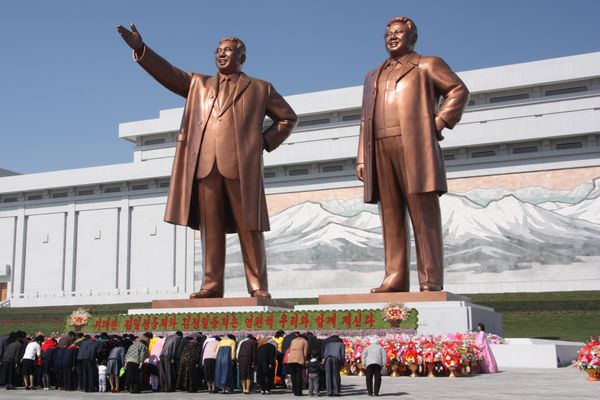 No Reason to Stop: North Korea Needs Its Nuclear Tests

In recent years, news of North Korea has been followed by the words "nuclear", "reactor, "ICBM", or some combination of those words. After all, the first half of 2013 saw news of another nuclear weapons test, the launch of a satellite, as well as the reopening of North Korea's plutonium production facility. While most nations have agreed, at least superficially, to move toward a denuclearized world, North Korea has continued to pursue and advance nuclear technology. And from the recent developments, this is not likely to change, due both to the benefits it confers on to North Korea and the rest of the world's inability to encourage North Korea to end it.

Kim Jong-un is a new leader. Despite being in office for almost two years now, he is still an unproven one. In a nation where the leader is revered, any change in leadership creates inherent doubt. In fact, there have been numerous reports of dissent among the military. A defector from the North told the Daily Telegraph that factions had formed over whether or not to accept Kim Jong-un as the leader. Joseph Bermudez, an expert on North Korea, has also suspected that the faction divisions have become violent. Especially in a nation that focuses primarily on military matters, the loyalty of the nation's military is crucial for the continuance of its leader. In order to consolidate control, Kim Jong-un has taken steps to remove and shuffle many senior military officials. Despite this, however, this does not change his image as that of an inexperienced leader.

As such, it is likely that the recent military escalations have been Kim Jong-un's method of quickly getting this experience he seems to lack. In order to show his people that he is capable leader, he uses a situation, such as an escalation of tensions, in order to demonstrate his leadership skills. Unlike his grandfather, Kim Il-sung, who earned much respect and fame for his leadership of guerillas in the Second World War, there is no conflict for Kim Jong-un to display his leadership with. While a renewed Korean War would be incredibly devastating to both North Korea and South Korea, most experts agree that superior South Korean technology, along with US assistance, favors the South. In addition, the US's flyover of B-52 strategic nuclear bombers in South Korea is clear indication that the American "nuclear umbrella" covers the peninsula as well. An actual conflict is simply not beneficial enough to North Korea to justify starting one.

Instead, Kim Jong-un opts for the second best option. Almost as terrifying as actual conflict is the mere threat of a nuclear strike. Nuclear test detonations and ballistic missile launches all invigorate the North Korean populace, making it seem as though the nation is at the forefront of technological development. What dissenting high-ranking officials existed are now convinced of the new Supreme Leader's decisiveness and bold stance against the United States. This image is also the one presented to the general populace of North Korea; should any uncertainty exist, it could easily be eradicated. Thus, Kim Jong-un is able to secure his seat as the head of the state without committing to war.

In the future, it is likely that Kim Jong-un will continue the use of this tactic in order to maintain control. By using the development of nuclear weapons as propaganda, dissent can be controlled. Even if North Korea were not able to fully develop nuclear weapons, by continuing with both missile and underground nuclear detonation tests, North Korea is able to convince its people that they are—at least technologically—among the most powerful nations in the world. The international attention drawn by these actions would only seem to further reinforce this fact in the eyes of the people. Similarly, if North Korea agrees to abandon nuclear development, it is likely to be seen as weakness by its people or military officials. This would not only increase dissent, but could possibly lead to a destabilization of the regime itself.

In addition, short of military action, the western world is currently relatively powerless in stopping North Korea's nuclear program. Few diplomatic approaches exist and of the ones that do, none are likely to be effective. As one of the less developed nations in the world, North Korea relies heavily on both food and energy aid. According to a report by the Congressional Research Service, the aid provided is not above "subsistence" levels, indicating that even with the aid, the people of North Korea barely survive. Many believe that the aid provided by countries like the United States can be used as leverage in order to diplomatically lead North Korea to abandon nuclear technology. However, because of China and South Korea's unconditional aid, this may prove to be largely ineffective. Many also believe that providing aid is a humanitarian matter rather than a political one, arguing that the North Korean people should not be "punished" for the actions of its government. The Six-Party Talks, created specifically to resolve the issue of North Korea's nuclear development have also proven ineffective. Made up of China, the United States, South Korea, Japan, and North Korea, it is designed to provide easy dialogue and discussion on the issue. Since its establishment, the talks have occasionally come to some preliminary agreement or concession by North Korea.

However, these are usually declared void soon after, destroying any progress made. So far, pursuing nuclear weapons has only been useful to North Korea, and the West has failed to convince them otherwise. It has enabled the current regime to solidify its position and will likely continue to be way to generate nationalism and fervor for the regime to maintain control. On the other hand, the international community has nothing to diplomatically convince North Korea to end its program. China and South Korea continue to send aid essentially regardless of North Korea's actions and, with the indefinite suspension of the Six-Party Talks, possibly the best avenue of diplomatic discussion is shut down.