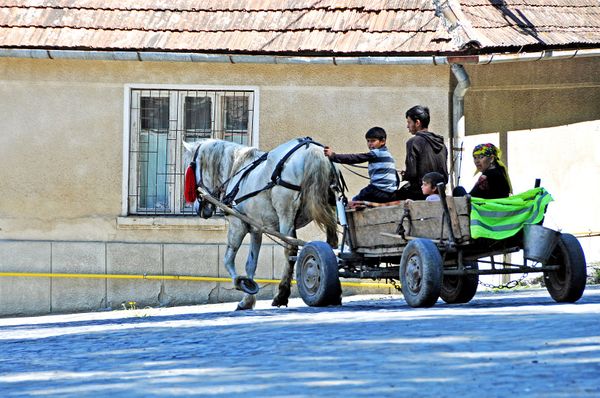 Popular stereotypes of Gypsies as sultry dancers, inscrutable fortune-tellers, and carefree wanderers have surrounded the Gypsies with a romantic mystique.

In reality, Eastern European Gypsies, or Roma, as they prefer to be called, have had a bleak existence characterized by persecution and suffering ever since they emigrated from India between 500 to 1,000 years ago. Under the Nazi regime, a staggering 98 percent of the 140,000 Czech Roma were murdered. Fifty years later, the transition to democratic societies in Eastern Europe has generated growing racial discrimination against the five to nine million Roma in Eastern Europe. Still, the growing international attention that has accompanied Eastern Europe's gradual shift toward democracy could provide a much-needed forum where the Roma's persecution and neglect can finally be addressed.

The Roma's refusal to be assimilated into European cultures has made them the target of relentless persecution for centuries. Besides speaking a non-European language related to Hindi, the Roma also isolate themselves by referring to non-Roma as gadjo (meaning "foreigner" or "stranger") and by frowning on marriage outside their ethnic group. Furthermore, the Roma's unique cultural practices and distinctive physical attributes, such as dark skin, have made them easy to single out.

Persecution has become an even more severe problem for the Roma in recent years. Suppressed under the Communist regime, racial discrimination now operates under the auspices of "freedom of speech" and "self-determination." Mob attacks, lynchings, and other assaults against the Roma have soared; in 1997, over 160 racial crimes against the Roma were reported in the Czech Republic alone, as opposed to only nine cases in 1990. Serbs and Kosovar Albanians killed Roma and destroyed their property during the most recent Kosovo crisis.

Aspects of daily living are also being threatened by recent economic developments. Since the majority of Romany adults are uneducated, unskilled workers, the shift to market economies has meant poverty for a people who had enjoyed full employment under the former Communist regimes. In 1 995, for example, the unemployment rate was only three percent among non-Roma in the Czech Republic; Czech Roma, on the other hand, suffered from 50 to 90 percent unemployment. Both discrimination and economic disparity have resulted in the segregation of the Romany population. Most live in isolated rural areas or in impoverished ghettos, further limiting opportunities for improving their own lives.

Some Eastern Europeans explain the Roma's poverty by claiming that the stereotype of Roma as shifty criminals and lazy workers is true. An estimated 70 percent of the Romany population do in fact have criminal records, and a large majority of them also rely on welfare. However, the overwhelming poverty and restrictive prejudice that the Roma face often leave them no alternative but to turn to petty crime. In addition, since few Roma receive adequate education, many of them are qualified for only the most menial jobs. With large families to support, Roma often find that unemployment benefits and welfare programs provide a better source of income than long hours of low-paying labor.

Proactive policy changes could ease the plight of the Roma. Central to the necessary changes would be a restructuring of the education system.The present system only increases the inequalities between Roma and non-Roma; for example, two out of three Romany children are sent to "special" schools for the mentally handicapped. Part of the problem lies with the Roma themselves; many adults, lacking education, see little merit in schooling. But at the same time, perceptions of the Roma as "mental retards" (as former Slovak Prime Minister Vladimir Meciar remarked) demonstrate the severity of the ingrained bias against educating them. Furthermore, the tests that condemn the Roma to an inadequate education are inherently biased: few Romany children are fluent or literate in the languages of the tests since these children grow up speaking the Romany language.

Unfortunately, politicians and official policies contribute to a pervasively anti-Roma environment. Jan Slota, the head of the party in charge of the Slovak education ministry, has stated that the best way to deal with the "gypsy problem" is with "a long whip and a small yard." Two Slovak villages recently passed ordinances prohibiting Roma from settling.The council of the Hungarian town Satoraljaujhely cited "genetic reasons" for its ruling in favor of the forced emigration of 40 Roma. Even where such bias is not obvious, national attention to the Roma leaves much to be desired: a Czech citizenship law that indirectly excluded Roma was only recently changed to include them as full citizens.

International attention will play a vital role in helping the Roma, and the European Union has already made a critical difference. Last year, the EU excluded Slovakia from the first round of membership application due to its ill-treatment of minorities, particularly the Roma. Hungary has been similarly chastised by the EU. Out of eagerness to join the EU, the Czech, Slovak, and Hungarian governments have all established commissions to explore possible solutions to the discrimination and economic inequality that the Roma face. By making better treatment of the Roma a condition for new members, the EU forces Eastern European nations to reexamine and revise the discriminatory nature of their institutions.

Unfortunately, many of the changes that the Eastern European governments have wrought, including the establishment of an Office for National and Ethnic Minorities in Hungary and a commission for Romany community affairs in the Czech Republic, are still window-dressing. More international pressure is still needed for Eastern European nations to implement truly effective measures toward eliminating discrimination against the Roma.