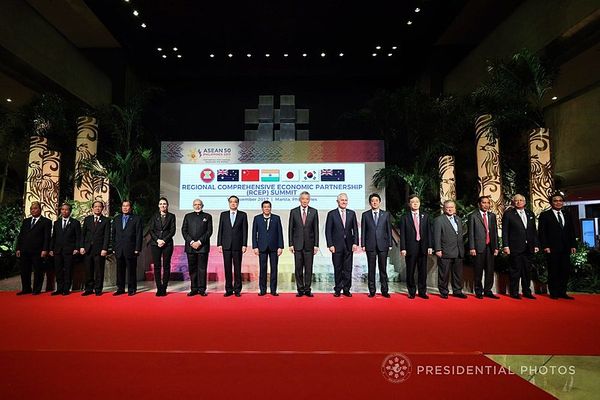 An Opportunity for Peace: Japan, RCEP, and The New Cold War

When the Economist called the US-China rivalry “a new kind of cold war” in 2019, tensions were largely over trade, technology, and geopolitics. Today, relations are significantly poorer, with the United States demonizing China as an incompatible and perilous competitor. A US-China Cold War is emerging, and there are several forces trying to isolate China. Japan should lead the nations of the Asia-Pacific region in opposing these forces. By using the Regional Comprehensive Economic Partnership, Japan can maintain a calming engagement with China and avoid taking sides in a clash of powers.

This year, Japan’s position in regard to China has been tested. In May, China introduced its infamous National Security Law in Hong Kong, prompting US Secretary of State Mike Pompeo to assert that the Chinese Communist Party seeks “the destruction of Western ideas, Western democracies, Western values.” Facing the Hong Kong crisis, the governments of the UK, Canada, and Australia followed the United States in asking Japan to join a statement condemning China. However, Japan declined the request. The same week, Hong Kong’s pro-democracy leaders wrote to Japanese Prime Minister Shinzo Abe, imploring him to “think twice about whether [he] really needed to invite President Xi to Japan.” Again, Japan’s response was to dodge: Abe also kept his distance from President Trump and US criticisms of China for its handling of the coronavirus.

Japan’s decisions may appear feckless, but Japan has no better option: however repressive and aggressive the Chinese government is, Japan must realize that it has no choice but to engage with China. Unlike the United States, Japan is right next door to China, a nation of 1.3 billion people and nuclear weapons. Evidently, any Chinese decisions will have an outsized impact on Japan and the wider East Asian sphere.

Japan has avoided conflict with China for decades even before China became the economic powerhouse it is today. In 1989, Japan had 15.3 percent of the world GDP compared to China’s 1.7 percent share. This was the same year the Chinese government attacked protesters in Tiananmen Square in Beijing. However, when the leaders of the seven largest world economies (G7) were set to harshly denounce China for the massacre, Japan protested. Despite fierce opposition, Japan successfully inserted a phrase into the joint declaration that the G7 nations did not want to isolate China. And eventually, Japan was the first of the G7 countries to ease sanctions on China imposed in the wake of Tiananmen Square.

Thirty years later, Japan and China’s relative economic strength have changed dramatically: Japan’s share of the world GDP has declined to 5.9 percent while China’s has surged to 16.0 percent. More than ever, Japan needs to have a good relationship with China—not just geopolitically but economically, particularly as Japan struggles to recover from the coronavirus-caused downturn.

However, just when Japan needs China most, Washington is hawkish toward Beijing. With rising negative feelings toward China among Americans, experts say that a cold war between the two has already started and that the confrontation will “force countries to choose a side,” democratic or authoritarian. In Japan, while Abe remains conciliatory toward China, 85 percent of Japanese respondents had a negative view of the regional power in a poll taken in 2019. Some members of Abe’s party have publicly stated they are opposed to President Xi visiting Japan. In both the United States and Japan, there is strong anti-China sentiment.

Nonetheless, the US-China cold war is ultimately a matter of security, not public opinion. As Lee Kwan Yew, the former Prime Minister of Singapore, said, “When elephants fight, the grass is trampled.” While Lee Kwan Yew was describing Asian countries caught between the giants of the US and the USSR, Japan should be guided by a similar sense of realpolitik, the calculation of national interests, not lofty principles.

Historical diplomacy provides a roadmap for Japan’s best path forward. Before attending the 1989 G7 summit, Hiroshi Mitsuzuka, the Japanese foreign minister, met the leaders of the Association of Southeast Asian Nations (ASEAN) to gather their voices. He represented these leaders at the summit by quoting Mr. Lee: “I prefer a peaceful China as my neighbor to an angry and annoyed China.” Just as it did in 1989, Japan should not praise China’s authoritarian regime, yet it should soften China by engaging it. This time, Japan is relatively weaker but has a stronger and more effective tool.

That tool is the Regional Comprehensive Economic Partnership (RCEP). RCEP has the aim of creating a free-trade partnership in the Asia-Pacific, including China, Japan, South Korea, India, Australia, New Zealand, and the ten ASEAN members. These nations want a harmonious China and are ready to engage it. Japan is well-positioned to lead these efforts as the world’s third-largest economy and the leader of another free-trade agreement: the Comprehensive and Progressive Agreement for Trans-Pacific Partnership. Because China is eager to conclude RCEP, Japan should use this leverage to improve the region’s ties with China.

China needs security and respect. RCEP can facilitate negotiations, compromise, and bargaining among the members. Through these processes, the Asia-Pacific countries can and should nurture trust among themselves and provide China with a sense of partnership and a channel to the West. All this can be done without allowing China to dominate RCEP.

However, RCEP and warming relations face several challenges, including China’s increasingly aggressive behavior in the South and East China Seas and against Taiwan. In response, some ASEAN countries have toughened their attitude toward China. Nonetheless, RCEP can survive such geopolitical disputes. Opposing China’s policies is not the same as isolating China. Engaging is not the same as appeasing. To solve these very issues, stakeholders need to engage China, the most powerful Asian country. RCEP should help achieve that goal.

It is often said that unlike western nations, Asian nations don’t seem to care about universal values like human rights and democracy. This is not true. Realpolitik is universal. As a leader of the European Union, Germany condemned Russia’s annexation of the Crimea Peninsula in 2014 and imposed sanctions on Russia. Today, however, Germany imports Russian gas despite strong US opposition. And the United States, while condemning China for its authoritarianism, supports Saudi Arabia, a different autocracy.

Japan must be wise in avoiding another cold war. At the coming G7 meeting this year, Mr. Abe should represent the Asia-Pacific nations in their need for a peaceful China and accept the responsibility of modulating China’s behavior.