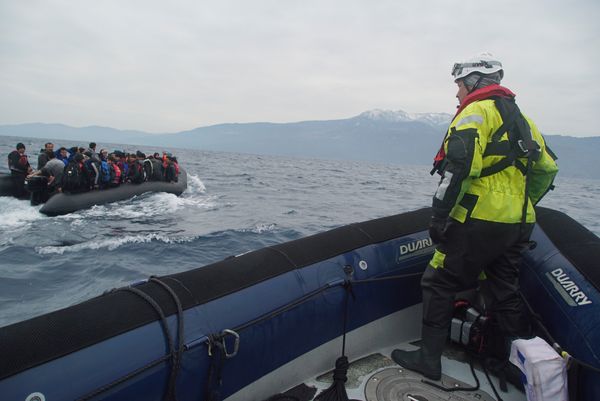 Ignoring a Baby’s Cries: Building a Better Naval Mission in the Mediterranean

On August 24, 2015 at 4:15 am, aboard a small German ship in the middle of the Mediterranean Sea, a baby named Sophia was born. Her Somali mother had been rescued as part of the EU’s ENUAFOR MED Task Force, primarily intended to capture refugee smugglers and terminate human trafficking in the Mediterranean. They, and 453 other migrants, would disembark the following night in Taranto, Italy. One month later, then-EU High Representative for Foreign Affairs Frederica Mogherini suggested renaming the ENUAFOR MED Task Force after Sophia to honor “the lives of the people we are saving [and] the lives of people we want to protect.”

Today, less than five years after that bold statement, the mission Sophia has officially ended, even though the mission’s mandate had earlier been extended to contribute to the implementation of the UN arms embargo off the coast of Libya. As a replacement for Sophia, the foreign ministers of the EU member states proposed a new EU naval mission aimed at controlling the European arms embargo on Libya. However, Sophia initially included the exact same goal, eventually morphing into a humanitarian mission—the need for a new mission is unclear. Further modifications are necessary to ensure the effectiveness of Sophia’s replacement. By addressing the flaws that led to Sophia’s demise, the EU would be able to institutionalize humanitarian responsibilities and actually support the refugees of the Libyan Civil War.

Despite its stated aims of preventing the human smuggling and trafficking, as well as monitoring the implementation of the UN arms embargo on Libya, Sophia’s humanitarian nature led to opposition from many EU member states. Although rescuing refugees in distress at sea was never an explicit goal of the mission, national naval forces nevertheless had to adhere to the principle of non-refoulement: a provision in international law under which no rescued person could be forced out of a host country. This meant that ships would temporarily bring rescued persons like baby Sophia and her mother to the shores of Italy, the European Union country closest to the operational sphere of the mission.

However, since the European Union could never reach a common agreement on a pan-European distribution of refugees, countries like Italy were saddled with the responsibility of processing asylum applications and providing shelter for incoming refugees. Additionally, various countries, including Italy, Austria and Hungary, also claimed that Sophia created a pull factor that encouraged migrants to cross the Mediterranean by allowing refugees to enter the European Union without being immediately returned to their countries of origin. Although statistics have clearly proven this claim to be false, Italy has become increasingly reluctant to allow rescued migrants to disembark on its shores, forcing other countries such as Germany to suspend their participation in Sophia. So in the beginning of 2019, Italy vetoed a continuation of the mission, leading to a six-month suspension of Sophia and its ultimate termination at the end of March 2020.

In recent years, experts have evaluated Sophia rather critically in light of the goals its creators had originally set. Although German naval crews alone rescued 22,534 displaced people in the Mediterranean, they were only able to apprehend around 150 presumed smugglers. While these results may be incredibly promising from a humanitarian perspective, they also highlight how quickly smugglers have adapted: rather than guiding the boats towards the Italian shore themselves, they started to put inexperienced refugees in charge of steering the boats. As stated in a report issued by the British House of Lords, “an unintended consequence of Operation Sophia’s destruction of vessels has [also] been that the smugglers have adapted, sending migrants to sea in unseaworthy vessels, leading to an increase in deaths.” The report goes on to conclude that “Operation Sophia has not in any meaningful way deterred the flow of migrants, disrupted the smugglers’ networks, or impeded the business of people smuggling on the central Mediterranean route.” This verdict partially rests on the fact that Sophia only addressed smuggling from Libya to Italy, despite the fact that most smuggling is actually carried out internationally within Africa, Europe and Canada. In this regard, European policymakers failed to establish a system of cooperation between the police and the judicial authorities of different regions, which would have enabled more effective investigations of smuggling and trafficking operations.

Further complicating the analysis, some legal scholars claim that the European Union would lack jurisdiction over vessels in third-country territorial waters, and would have no legal basis for coercive measures against these vessels without the express consent of those third parties or authorization from the United Nations Security Council. In that sense, the Sophia mission was questionable from both a legal and a human rights perspective. The result is that the European Union seems to have moved away from what is expected of a humanitarian foreign policy actor.

Sophia’s Successor As a Duplicate

Rather than addressing at least some of these issues, however, the proposed replacement for Sophia abandons the only aspect that allowed it to have a positive impact: rescuing refugees at sea. As the new EU High Representative for Foreign Affairs Josep Borrell stated in a press conference in February 2020, the new mission is supposed to be limited to the Eastern Mediterranean, away from the routes of migrants trying to reach Europe from Libya. Although Borrell admitted that international law would require European ships to save any drowning people that they encounter, he simultaneously stated that maritime assets would be immediately withdrawn from certain areas to prevent the new mission from acting as a pull factor. Meanwhile, rules about how rescued refugees would be distributed among EU member states are still unclear. The focus of the new mission would be on national militaries, involving aerial and naval surveillance of the Mediterranean to monitor the weapons embargo on Libya. However, critics have pointed out that effective monitoring would require similar surveillance on the shore as well. And as explained earlier, the new mission would also lack international cooperation and the required legal permissions.

Based on these characteristics it seems that the proposal for the new naval EU mission is a clone of Sophia, not an improvement. Only now, EU member states are trying to avoid their humanitarian responsibilities by moving the mission further east to limit encounters with refugees. But the refugee crisis continues; the report issued by the British House of Lords states that “As long as there is need for asylum from refugees and demand from economic migrants, the business of people smuggling will continue to exist and the networks will adapt to changing circumstances.” Human smugglers will simply adjust their routes, prompting renewed debates about distribution of “illegal” immigrants. Nothing will have changed—except that thousands of refugees will die. Unfortunately, without the successful resolution of security and developmental challenges faced by refugee source countries such as Libya, the large movements of refugees will not diminish, and so far, neither Sophia nor its replacement have accurately addressed these more complicated issues.

In a speech describing Sophia in February 2017, former EU High Representative for Foreign Affairs Mogherini said, “This is the European way, gathering internal regional and international consensus on sustainable, human, effective, respectful solutions. This is the spirit of Operation Sophia.... I think we are showing a great example.” The sentiment is a lovely one. But it has become all too clear that virtually none of these words are true in practice. Now it is up to the foreign ministers of member states to not allow the new naval mission to become Sophia 2.0. The stakes could not be higher.