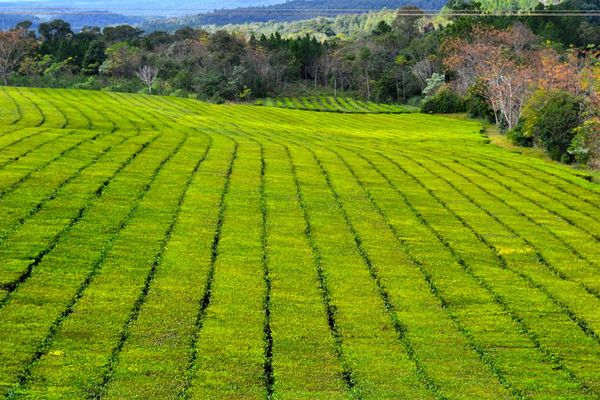 Argentina’s Misiones province has a bit of a problem. As several local newspapers have reported, thefts of the province’s main agricultural commodity, often referred to simply as “the green leaf” or “green gold,” have risen, and authorities, despite making several arrests, are at a loss.

Misiones is not a hotbed of the coca trade, but rather a center of production for one of Argentina, Uruguay, and Paraguay’s most beloved commodities: yerba mate, the leaves used to prepare a herbal infusion called mate (pronounced mah-tay, with two syllables). As a Paraguayan villager told Harvard’s ReVista, drinking mate “is such an intrinsic part of us that you really don’t think about it until somebody else points it out.” However, unlike other caffeinated drinks like Italian coffees and Chinese teas, mate has not largely made it past the Southern Cone and into the United States’ globalized drink palate, likely because it is an acquired taste: one self-described “reluctant” mate drinker described it as a mix of “green tea and coffee, with hints of tobacco and oak.”

Yet mate’s global popularity has finally started to increase in the last decade or so. Entrepreneurs have started to tap into the growing American market for alternative teas—and into Gen Z’s preference for more ecologically and socially conscious products—with shade-grown yerba mate. Since mate production provides an economic incentive to reforest the Atlantic rainforest in Brazil, Argentina, and Paraguay, these emerging companies demonstrate how ecological restoration and profit can go hand in hand.

The Ecology of Mate Production

Yerba mate has been around a long time. Sixteenth-century Spanish colonizers in Paraguay marvelled at how the indigenous Guaraní people who imbibed the infusion could work longer and harder than them. After the Guaraní ignored a 1616 ban of the green leaf, Jesuit missionaries noticed its value to their indigenous laborers and planted it alongside other agricultural commodities at their missions; it soon became a valuable export commodity for the missionaries, who could claim a tax exemption to the chagrin of profit-seeking Paraguayan merchants. After Spanish monarch Carlos III, who wanted to reduce the church’s influence in the Spanish realms, expelled the Jesuits, they abandoned their plantations, although Paraguayans still harvested the natural stands that grew in the Atlantic rainforest.

Large-scale plantation agriculture did not return until the 1890s, when a massive influx of European immigrants—German, Ukrainian, Polish, and others—arrived in Argentina and Brazil’s yerba mate belt. German colonists in the area astutely noticed that they would have to adopt crops already adapted to the soil and climatic conditions in order to survive, and mate fit the bill perfectly. By 1915, the plantation system had become widespread in Misiones, and Argentina overtook Brazil and Paraguay as the largest producer of mate. After all, plantation agriculture had double the yields of solely exploiting the native forests.

While plantation agriculture increases production, it also has an ecological cost. As with other deforested ecosystems, yerba mate plantations are more exposed to soil erosion and degradation, which poor soil management practices exacerbate. Unsurprisingly, abandoned mate plantations have lower levels of nitrogen and phosphorus than the virgin ecosystem.

Such an extractive model, though, is unsustainable. As a result, yerba mate planters have gradually started adopting an agroforestry model, which involves growing other trees  alongside the mate trees. While this model decreases the productivity of plantations when viewed alone, the ecosystem as a whole benefits because the other trees provide shade for the mate trees that helps the leaves to retain more nutrients and flavor, additional organic material which improve soil moisture, and another root system to prevent erosion. Intercropping with Paraná pine, for instance, reduced soil erosion and moisture loss while improving soil fertility. When managed sustainably, such intercropping can also help farmers diversify their plots with another source of income—primarily timber and fruit—and contribute to the reforestation of the Atlantic rainforest.

That rainforest, largely coexistent with the mate belt, has seen better days: across Brazil, Argentina, and Paraguay, it has lost more than 93 percent of its land cover. While mate plantations have certainly contributed to deforestation, other culprits have emerged in the past ten years: soybean production and cattle ranching. Argentina and Paraguay both rank within the top five soybean exporters by value, and rising demand for both products has driven rapid expansion into the Atlantic rainforest. In Paraguay alone, soybeans and beef exports comprise 90 percent of combined exports, meaning that the country is dependent on just a few commodities—commodities that also drive deforestation.

To combat this deforestation, international NGOs have seized upon agroforestry as a sustainable and income-generating solution, and shade-grown yerba mate is a primary example. For instance, the World Wildlife Fund started a program in 2001 to create forest corridors that linked previously fragmented forest areas by using yerba mate to secure the buy-in of local communities and funding local female-owned cooperatives such as La Hoja Completa. Around the same time, local cooperative Titrayju sprung up to benefit the indigenous community with organic and eco-friendly production practices. Guyra Paraguay, meanwhile, bought 7,000 hectares of land within San Rafael National Park, regarded as a “paper park” within the country, to develop shade-grown mate agriculture alongside several indigenous communities. Finally, Fundación Moisés Bertoni seeded 856 hectares with around 1.3 million mate seedlings as part of a broader World Bank project to reforest the Paraná rainforest.

These programs have largely succeeded in preserving existing forest habitat because they reduce the economic incentives for deforestation; destroying a forest that already has an income-generating activity makes little economic sense. At the same time, agroforestry projects that plant trees can slowly yet surely reforest areas that were once exclusively yerba mate plantations and add new habitat for local wildlife. Whether farmers plant mate plants in previously existing forests or new trees to augment previous mate plantations, both options create new carbon sinks as well, since mate and shade trees both take carbon out of the atmosphere. And of course, the projects generated income for the local community, especially women and indigenous people.

A New Way to Caffeinate

Even while yerba mate is increasingly becoming the solution to an ecological crisis in the mate belt, its demand abroad has started to increase. That ecological role, in turn, plays a central role in an increasingly savvy marketing campaign by companies espousing principles of “market-driven regeneration.” Profit is definitely on these companies’ minds, but ultimately, the story of yerba mate shows how profit and environmentalism are not mutually incompatible.

A group of five Californian friends founded Guayaki, widely recognized as the pioneer of this model, in 1996. Having founded the company right out of college, Guayaki’s founders quickly seized on college students, with their insatiable desire for caffeine, as a key market by using the tried-and-true technique of collegiate brand ambassadors. Beyond marketing its triple bottom line of social, environmental, and financial performance, the company touts mate’s benefits, especially when compared to coffee or other energy drinks: a more balanced stimulant effect with more natural antioxidants than coffee and fewer artificial chemicals than energy drinks. It also helps that its products are not straight yerba mate, but sparkling beverages with mate as a key ingredient instead.

That marketing campaign has paid off, especially as the markets for organic products, healthy beverages, and “exotic” flavors have started to expand. Campus papers at the University of California-San Diego and Occidental College reported that mate had become a staple at dining halls and off-campus convenience stores. As one Occidental student said, “Every day I will see someone in class with a drink.” Guayaki now makes more than US$40 million a year in sales, and the company reported that it had sold 390,000 cans across 171 universities in 2017 and 2018.

The company’s two other bottom lines have prospered as well. It has stewarded more than 81,000 acres of rainforest, planted 8,800 native trees, and created 670 jobs that paid a living wage of around 2.3 million guaranís (US$357) per month since organic, shade-grown mate can fetch two to three times the yield per pound than plantation-grown mate. These increased wages are critical in a region where the average farmer makes far less than that.

Other companies have emulated Guayaki’s sustainable business model and have started to compete with it. Mi Mate, founded by students at UCSD, follows it almost to the letter, purchasing its mate from an independent farm that pays its workers a living wage and has contributed to the construction of local schools. Eco Teas also specializes in organic mate, and Clean Cause uses 50 percent of its profits to support teens recovering from drug addiction. Others have seized upon the product but not necessarily the mission: teaRIOT has incorporated a mate flavor into one of its drinks, German brand Club-Mate has developed a mate-based soft drink, and even Pepsi has its own mate brand. Yerba mate is “green gold” for more than just Argentines.

That status has attracted some criticism, which highlights the neoliberalism inherent in “exotic” marketing and the dubious ethics of white men profiting off an indigenous commodity. These arguments certainly make a valid point, given the long history of U.S. companies profiting off Latin American commodities. However, they also ignore the lengths companies like Guayaki and Mi Mate have gone to consult the indigenous communities involved, fund projects of actual interest to the community, and pay far more than market price for mate. Indeed, both Argentine and indigenous growers alike appreciate the company’s focus on environmental consciousness and the extra income the mate provides.

The Future of Yerba Mate

With international companies getting on the mate bandwagon, yerba mate looks destined for a future more oriented towards the Global North than the Global South. Overall, it seems that this commodity—previously limited by its small geographic range only in the Southern Cone—will become yet another local taste adapted for a global audience. Two trends will likely continue as mate continues its path of globalization. First, young people will lead the craze as they search for new and exciting beverages that still have social and environmental benefits. Second, straight yerba mate will not be the bestseller; rather, mixed beverages with mate as a component will succeed, since consumers generally dislike its otherwise strong taste.

This increasing global demand for mate will have local benefits, but only if more companies adopt the agroforestry model that Guayakí has adopted and pay attention to local and indigenous concerns. It will be a slow battle—after all, neither shade trees nor mate trees spring up overnight. But with the Atlantic rainforest and local livelihoods at stake, it is a battle worth fighting.