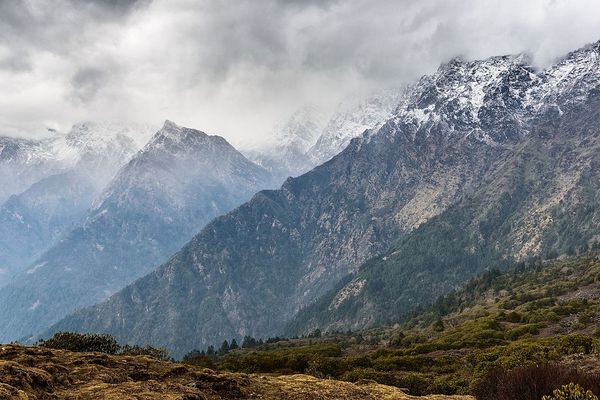 The Geopolitics of Water and the New Indo-Pacific Strategy

As part of his Indo-Pacific strategy, President Donald Trump signed the Tibetan Policy and Support Act and the Taiwan Assurance Act in December 2020. The purpose of the acts became clear in January 2021 when the Trump White House released a declassified “US strategic framework for the Indo-Pacific.” The framework reiterated Washington’s commitment to maintaining the “diplomatic, economic, and military preeminence” as well as supporting India and the “like-minded” democratic countries throughout the Indo-Pacific region.

Through such legislation, Washington has sent a thinly veiled message to China that the United States is tying the Tibetan and Taiwanese issues with that of US-India relations under a broad Indo-Pacific plan. The United States’ strategy is unambiguously aimed at counterbalancing Beijing’s influences and ambitions, and Beijing unsurprisingly responded that China “resolutely opposed” both congressional acts.

President Joe Biden seems poised to continue his predecessor’s support for Tibet and Taiwan. In his “Interim National Security Strategic Guidance” document released in March, Biden stated that “when the Chinese government’s behavior directly threatens our interests and values, we will answer Beijing’s challenge.” Among other challenges identified by the Biden White House, Taiwan and Tibet are now publicly recognized elements of American “interests” and democratic “values” within the broader policy framework of the new administration to “forge a common approach with like-minded countries.”

An Evolving Nexus of Allies

The Taiwan Assurance Act (TAA) of 2020 is intended to support Taiwan’s defense strategy of asymmetric warfare and encourage the Taipei administration to increase its defense expenditures. Furthermore, the act reaffirms American support for Taiwan’s participation in the United Nations and its affiliated agencies—like the World Health Organization Assembly—as well as regional bodies like the Association of Southeast Asian Nations that normally require statehood for membership.

The TAA is the most recent act signed by an American president that confirms Washington’s pro-Taiwan course. The Taiwan Travel Act signed back in 2018 encourages “visits between officials from the United States and Taiwan at all levels.” The 2019 Taiwan Allies International Protection and Enhancement Initiative (TAIPEI) Act involves the United States in enhancing “economic, security, and diplomatic engagement” with countries that have “strengthened, enhanced or upgraded relations with Taiwan;” simultaneously, the TAIPEI Act implies a punitive reduction of American engagement with countries whose actions “undermine Taiwan.” Most importantly, all congressional acts maneuver ingeniously around the One China policy by strengthening Taiwan’s international position without stating its independence.

Concurrently, the new US legislation on Tibet is possibly a game-changer in the geopolitics of water in the entire South and Southeast Asian region. One of the key problems it seeks to address is China’s tremendous control over the Tibetan Plateau and the sources of several rivers in the region. With numerous dams built on the Brahmaputra, Irrawaddy, and Mekong rivers, China is able to store or divert water in a way that might lead to the drying out of vast territories downstream. The diversion of water could have serious implications for the livelihoods of almost half of the world’s population in South and Southeast Asia.

The Geopolitics of Water

The global community should seriously recognize the emerging geopolitics of water and the power Beijing wields from being able to unilaterally “turn off” the taps of the Tibetan Plateau’s dams. China’s power was on full display in early 2021: China cut the water flow of the Mekong River by 50 percent without a word of warning, ostensibly for a three-week power-line maintenance project. The decision affected the lives of millions of people along the waterways in the Southeast Asian countries of Cambodia, Laos, Myanmar, Thailand, and Vietnam. The decision did so by disrupting their fishing and farming livelihoods as well as floating markets and coastal houseboat communities that relied on river transportation. The ill effects of Beijing’s decision were amplified as the water level continued to drop significantly.

It might be hard to understand the intentions of the Chinese government: less than three months earlier, Beijing signed an agreement with the Mekong River Commission to share the year-round hydrological data on the upper streams of the Mekong River. Nonetheless, it has become abundantly clear that China’s “water card” can be used for political and economic pressure on small states downstream.

In mid-February 2021, water on the Mekong River yet again dropped to the “worrying” low level without prior notifications from China. On February 24, the United States called on China to “live up to its commitments on water data transparency.” With its warnings toward the Chinese government, the Biden administration has already proved it will follow the previous administration’s policy toward the Mekong water issue. In addition to open accusations toward China of secretly diverting and storing water, Trump’s State Department launched “the Mekong Dam Monitor” in December 2020 aiming at providing real-time data on the Mekong River. It followed the October 2020 announcement of the new Mekong-US Partnership, which would invest more than US$150 million to support the economic independence of Burma, Cambodia, Laos, Thailand, and Vietnam.

The smaller nations of Southeast Asia are not the only victims of China’s “water blackmail” practice: Beijing has also historically shown no hesitance to play the “water card” in its game toward India. For example, in 2017, China did not share crucial river data with India despite their existing agreement, making it impossible for the Indian government and ordinary people to prepare for the Brahmaputra river flood. China’s decision not to share data has been viewed as retaliation for the two-month-long Doklam standoff, where Chinese and Indian troops threatened each other by the Bhutan-China-India border.

The Tibetan Policy and Support Act strengthens the US focus on Tibet, and it also seeks to remedy China’s power over water in the region (among other issues) through expanding sanctions and building diplomatic ties. The legislation states that the United States will place sanctions, including the denial of entry on Chinese officials who interfere in the election of the current Dalai Lama’s successor. The legislation also calls for creating a new American consulate in Lhasa, the capital city of the Tibet Autonomous Region of China. Though the act does not at first glance seem to be directly connected to the water access highlighted in the declassified document, it shows that Washington is fully aware of the gravity of Tibetan affairs.

China’s control over Tibet allows Beijing to not only influence the followers of Tibetan Buddhism, including Dalai Lama in permanent exile at Dharamshala in India and the Tibetan Diaspora worldwide; it also gives the Chinese Communist Party leaders strong hands in territorial disputes with India and in the blackmailing practice over water toward South and Southeast Asian countries. As a result, the US government understands that whatever happens on the Tibetan Plateau in a political, cultural, or military dimension might well ripple through the whole of South and Southeast Asia.

The Partners of Democracy

The US legislation on Tibet and Taiwan proves Washington is consolidating its comprehensive Indo-Pacific strategy, openly challenging China at its most sensitive issues (Taiwan and Tibet) and aiming at defending small states in the region from China’s geopolitically-determined blackmailing practices. The connective tissue between the Tibetan and Taiwan acts is the declassified document. The document’s emphasis is on treating India as the primary ally and “like-minded” democratic nation in the Washington-led Quad (Quadrilateral Security Dialogue) alliance with Australia and Japan to counter China’s aggressive behavior. The document gives New Delhi the “leading role in maintaining Indian Ocean security” by encouraging India to strengthen relationships with South and Southeast Asian countries, including Taiwan. The TAIPEI Act is particularly playing a facilitating role for India as well as Australia, Japan, South Korea, and other Southeast and South Asian countries to engage with Taiwan.

India’s new partnerships across the region are a function of its increasing antagonism toward China. For example, the Trump and Modi administrations established the US-India military alliance in October 2020 right after the bloody clash erupted on the China-India border in the Galwan river valley in Ladakh in June 2020. It was a fight with literal fists and sticks as the Chinese People’s Liberation Army (PLA) and Indian soldiers are forbidden to carry guns during border patrols. Twenty Indian soldiers and five Chinese soldiers died from the skirmish.

Though it had the option to, China did not decide to play the “water card” as it did in the aftermath of the Doklam border crisis in 2017. Instead, the summer tensions led to an unparalleled deployment of 100,000 PLA and Indian soldiers along the Line of Actual Control in the Himalayas for the winter of 2020-21. In mid-February 2021, Beijing and New Delhi eventually agreed on a “synchronized and organized disengagement” from the Pangong Lake area of the Himalayan Ladakh region, cooling down the China-India border dispute—at least temporarily.

The release of the classified document by the Trump White House validates the significance of India policy in the American strategic calculus. It also mirrors a collective strategy of the Trump administration that viewed China as a strategic competitor and source of potential conflict. However, even more considerable are the Tibetan Policy and Support Act and the Taiwan Assurance Act as they constitute the broad Indo-Pacific strategy dealing with the China threat. For Beijing, this legislation is Washington’s attempt not only to interfere in China’s “internal affairs,” but also to intrude on China’s most sensitive issues: the status of Tibet and Taiwan.

In March, President Biden also reiterated that “we will support Taiwan, a leading democracy and a critical economic and security partner, in line with longstanding American commitments.” He also added that the United States “will stand up for democracy, human rights, and human dignity, including in Hong Kong, Xinjiang, and Tibet.” Assessing the threat of crossing the red line with China on the one hand, and the American commitment to Taiwan and Tibet on the other, Biden and his new national security team must now thoughtfully and carefully navigate the US Indo-Pacific strategy.

Speaking to G7 leaders in Germany in February 2021, Biden said that “democracy doesn’t happen by accident. We have to defend it, fight for it, strengthen it, renew it.” To accomplish its stated national interests and promote American values, the Biden White House should leverage the pursuit of Tibet and Taiwan policies as his success stories in restraining China’s aggressive behavior—especially toward water, a vital part of human life and economic livelihood in the Indo-Pacific region.

Dr. Patrick Mendis, a former American diplomat and a military professor, is a distinguished visiting professor of culture and diplomacy at the Chinese Culture University and a non-resident senior fellow of the Taiwan Center for Security Studies (TCSS) in Taipei. Dr. Antonina Luszczykiewicz, a faculty member of the Jagiellonian University in Kraków, is a visiting scholar at TCSS and the Institute of Political Science at Academia Sinica in the Republic of China (ROC). Both served as Taiwan fellows of the Ministry of Foreign Affairs in the ROC. The views expressed in this analysis do not represent the official positions of their current or past affiliations nor governments.