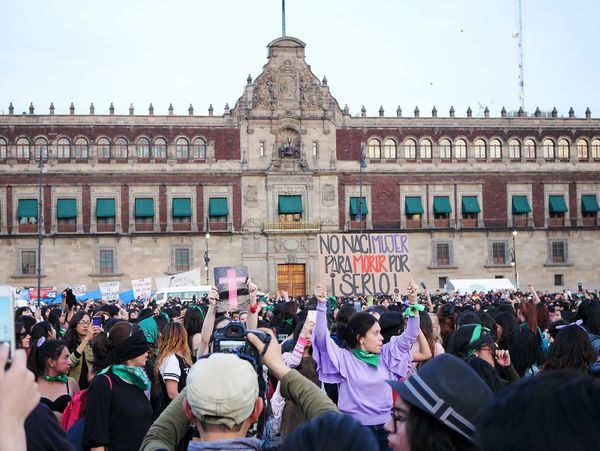 The year was 1993. Just miles away from the busy city center of Ciudad Juarez, Mexico, the battered corpses of young girls and women were found in the desert; they were discarded like garbage after violent assault and abuse. Disposal was simply an afterthought for their perpetrators.

Tragically, there are a thousand stories like this one. Through the years, Mexico has seen everything: women stabbed, skinned, disemboweled, raped, and murdered. Little girls have been kidnapped from their preschools in broad daylight, corpses have often been discarded in canals, and at times reporting a dissappearance is where the investigation ends. Girls as young as three and women as old as 74 are frequently abused and killed by men close to them. In the next ten minutes, approximately three women in Mexico will have been a victim of abuse. Ten femicides will occur by the end of the day.

The term femicide is not homicide of those that simply happen to be female, but rather females who are systematically murdered because of the fact that they’re female. Ingrid, Nancy, Susana, Noelia, Laura, Malena, Adriana, Isabel, Yuritzi, Luz are just a few names in a long list of victims. A culture of violence is not one that can change overnight even if laws were to suddenly do so. So, how did this culture develop?

The causes of gender violence are so much more complex than simple biology, and there is certainly no singular explanation. Rather, a diversity of factors have built upon one another. Some historians identify La Conquista, during which Spanish colonizers such as Hernán Cortes and his conquistadors arrived in the American continent and raped indigenous women, as the beginning of a culture of gender violence. La Conquista created “mestizos” or people with shared Spanish and indigenous ancestry. Psychologists suggest “mestizaje” creates a condition where mestizos “[envy] their Spanish father and despise their Indian mother.”

For most historians, however, there is little doubt that sexism in Latin America was heightened by European colonization. In the French Civil Code, which inspired much of early Mexican law, women were listed as dependents of men in all aspects of life from the law to finances. In line with European thinkers of the time, the general consensus in Mexico was that women were more well-suited to the domestic sphere as opposed to men who were born to think and act as independent agents.

From this, machismo was born in Latin America. Machismo, similar to toxic masculinity, is the set of ideals and beliefs that support the notion that men are superior to women. Men assume a dominant role in society where they may show little weakness and must protect the vulnerable, usually by exercising control over women. Because of this, women have been forced into more subservient roles in society for generations. Carmen Contreras, a government researcher for Instituto Mexicano de Investigación de Familia y Población (IMIFAP), elaborates that machismo paved the way for gender-based discrimination, which results in disparities in opportunities from a young age. These disparities range from education to labor, even skewing female representation in art where strong female characters are often absent in movies.

Frustration with machismo is reflected in La Revuelta's, the first female-run feminist newspaper in Mexico, writings, “The issue of women’s oppression is considered a secondary, subordinate problem that ‘will be resolved after social change. [Our] movement arose… from the disenchantment, the dissatisfaction, the frustration that we, as women, experience in the isolation of everyday life, [from this] emerges the need to unite with other women, at first perhaps as pure instinct.’”

Despite feminist agitating, there are still tangible gender inequities in Mexico. To this day, there are 30 percent more men in corporate roles than women; women spend an average of 40 hours a week in domestic duties while men only spend around ten; and 75 percent of men report being the head of the household. Despite the recent strides towards increased economic equality, as Mercedes Olivera explains, “the Mexican economy is growing, but women’s safety is decreasing almost perpendicularly to it.” Perhaps, the recent uptick in violence against women is a cultural backlash to equalizing forces in other domains of life, such as economics.

Gender discrimination and gender violence are different, but they feed on each other. While gender inequality has been present since time immemorial, rates of gender violence in Mexico have only been rising since 2006.

The cause of the recent bloodbath, as it has been called by some observers, is deeper than gender norms. Societal structure in Mexico demands that women must seek protection from the people who perpetrate violence against them, such as their police force and the State, making safety for women a double-edged sword. This need for safety is only compounded by the escalation of the Mexican Drug War, whose rise matches perfectly with an increase in gender violence in Mexico. Corruption, money, and narcopolitics are fundamental drivers of violence that has seen a 236 percent increase in the past four years alone.

Increases in gender violence have coincided with increases in other forms of violence, especially those associated with drug cartels. For example, Ciudad Juarez, the city which experienced the appalling 1993 murders, is also the city where the Juarez drug cartel conducted the majority of its narco-operations, money laundering, and homicides for roughly 25 years. Juarez plays an essential part of the ‘Golden Triangle,” where the states of Chihuahua, Durango and Sinaloa engage in vast drug production and trade, fueling not only the Mexican economy but the drug wars and addiction across the globe.

Efforts to reduce cartel related violence have failed. One reason is that local governments often turn a blind eye to (or even protect) drug operations in exchange for noteworthy but clandestine sums of money. There are reports of the Sinaloa cartel bribing the military and using the hands of law enforcement officers. In a famous trial, Manuel Fierro-Mendez, a police officer in Juarez with ties to local drug cartels, admitted to a significant connection between the cartels and local governments. He also claimed that nearly every person in his unit and every unit he knew was entangled in it too.

The elites that govern Mexico sometimes claim that “the violence devastating [for example] Ciudad Juárez is a positive outcome of the government’s war against organized crime.” Violence is viewed as a sign that the violent actions taken by the government to end narcotrafficking are working. However, the causal relationship between the two is tenuous at best: during the time of Peña Nieto’s presidency, where some of the most passive rather than ruthless policies and attitudes against crime were being followed, the country broke records in terms of homicide, violence and crime. Nonetheless, the state— severely infested with and poisoned by money, addiction, and corruption—has continued to perpetrate violence in its war against the cartels, which has undoubtedly led to increased incidence of gendered violence.

Shockingly, despite this violence, Mexico has one of the world’s most progressive constitutions with regard to gender and also leads the world in many feminist policies. United Nations Women congratulated Mexico for its historical 2014 constitutional reform where they mandated “political parties to ensure gender parity in their candidacies.” 2018 was declared “The Year of the Woman" in Mexico because female members of Congress exceeded 40 percent for the first time ever. As female representation in politics has increased in addition to other feminist organizing, gender violence has still persisted. Gender violence has consistently increased massively every year for the past twelve years. Femicide increased 137 percent in the past five years alone, four times the increase in the homicide rate. Is this the cartels fighting back? A broken government? Years of intergenerational abuse catching up to the statistics?

While there is no one answer, an important issue is certainly that perpetrators feel as though they can get away with their crimes. In Mexico, 93 percent of all criminal defendants in cases of gender violence are men. In Latin America, one in three women has been a victim of gender violence in their lifetimes. In Mexico, however, this number is actually two in three women. Despite the massive number of potential cases, few women choose to go to the legal system with 98 percent of all gender-related killings, mostly femicides, going completely unprosecuted.

Despite these worrying signs, many politicians are turning a blind eye. President Andres Manuel Lopez-Obrador claims that gender violence is a result of “neoliberal policies” and that the rising rate of femicides is just “part of a giant right-wing plot against him.” This rhetoric only serves to skirt around meaningful change, as argued by the United Nations.

After a feminist protest in February 2020, Obrador asked feminists not to demonstrate since the government is already working hard to eliminate femicides. Beatriz Belmont, an international relations student at Instituto Tecnologico Autonomo de Mexico (ITAM), responded with “If trashing monuments makes authorities look at us and listen to our demands, then we will continue to do so, [the president’s response] is unacceptable and unfitting for someone who should be acting as a national leader.”

In March 2020, millions of women and men flooded the streets surrounding the Angel de la Independencia in Mexico City. A few days after the march, millions of women refused to go to work as part of the protest #UnDiaSinNosotras, or #ADayWithoutUs. Moreover, local, state and federal government officials joined in the various protests as well. These movements build on the back of #NiUnaMenos to signal that not even one more femicide will be tolerated. They are giving the silenced a voice. They are shifting the way we perceive women within Mexico and challenging insufficient action.

Change is slow and hard, and even as Mexico makes feminist strides in other areas, its issues with gender violence persist. But there is momentum now for serious conversations about gender violence in Mexico, for a re-examination of the Mexican Drug War, for judicial reform, and for holding politicians accountable.

Ines is a rising sophomore in Lowell House. Originally from Mexico City, she concentrates in Social Studies with a secondary field in Statistics. She enjoys foreign affairs, tea and dogs.