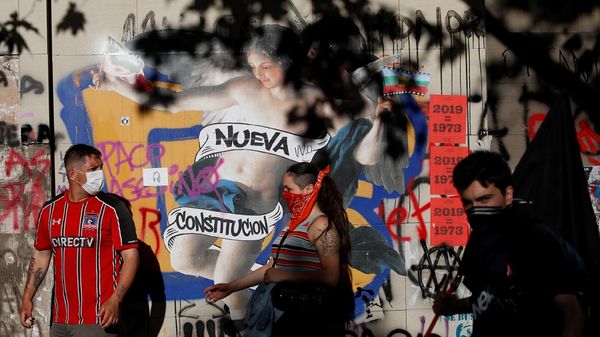 On September 11, 1980, General Augusto Pinochet, head of the authoritarian military junta that staged a coup d’état in Chile, arranged a national plebiscite to ratify a new constitution. The referendum, approved by 67 percent of the population, served to solidify Pinochet’s position as President of the Republic of Chile and give more legitimacy to his authoritarian regime. Violence and human rights violations became the status quo, and political activity was completely repressed.

Fast forward 40 years, to February 2020. The democratic government of Chile has agreed to hold a new national referendum in October. This time, it will ask the people of Chile if they want to get rid of the constitution of 1980, drafting a new one based on public participation, social inclusion, and increased social welfare. The decision comes after months of widespread protests and violence have shaken one of the region’s most stable countries. Why did it take so long for this essential agreement to be reached? How has Pinochet’s authoritarian legacy survived for so long, after transition to democracy, in a state that just wanted to move on?

The 1980 constitution was a way to increase political stability and avoid radical change, which explains why Chile has seen very little social reform in the past 40 years. Preserving the status quo and avoiding drastic reform has long been the key to avoiding the political chaos of the 1970s, and military officials maintained an essential role in the Chilean government to protect the legacies of the junta. Today, a new generation of Chileans is asking for change—change of the kind only a new constitution can provide.

Pinochet and the military junta established an authoritarian regime on September 11, 1973, after overthrowing socialist President Salvador Allende and his Popular Unity government. Two principles guided the new regime. The first was a complete depoliticization of society, achieved through repression, intimidation, and persecution of any opposition to the regime; political parties were banned, national electoral registries burned, and local governments and universities restructured. The second was a strict free-market economy based on prioritizing exports, the privatization of government social welfare programs, and private property.

The 1980 plebiscite for a new constitution institutionalized the military regime and gave it lasting powers over the country. For that reason, the junta carefully paced and controlled its drafting process. Critically, the final document included both permanent and transitional clauses; Pinochet’s junta sought to orchestrate a gradual transition toward democracy on its own terms.

The constitution’s transitional articles gave Pinochet sweeping powers over the nation for the next eight years, and promised a second referendum in 1988 to vote for his reelection. The junta received primary legislative powers, and Pinochet was acquired “sole authority to declare, in response to unspecified acts of violence, that a threat to internal order exists and, as a consequence, to implement a wide range of measures curtailing individual rights and normal political activities,” such as orders for arrests, censorship, restricted rights of assembly, border restrictions, and suspension of rights of judicial review for any of these actions.

In the long term, the armed forces gained enough control over other organs of the state to be guaranteed a “protected democracy,” meaning they would have a tutelary role over any future government with exclusive authority over national security. The permanent articles of the constitution restricted political activity and freedom of expression, reduced the role of the state in the economy and social welfare, and increased presidential powers, giving the executive the means to dissolve the chamber, decree specific legislations without congressional approval, and appoint most officials. A contemporary CIA report called the document “convoluted and confusing”; opponents claimed that that complexity was deliberate, an effort to keep Chileans from understanding Pinochet’s intentions.

Despite its obvious authoritarian nature, Chileans overwhelmingly accepted the new constitution, at least according to the official results. And because of the supposedly democratic nature of a referendum, the results should reflect what the people want. Nevertheless, numerous irregularities cast serious doubt on the democratic validity of the results. There were no guarantees of freedom of expression, secrecy, or fairness. Furthermore, the junta pretty clearly manipulated voters to serve its own interests through intimidation of opposition groups, intimidation of voters in smaller cities and the countryside, and costly publicity campaigns for the new constitution (despite restrictions over the opposition’s media presence).

If voter manipulation were not enough, the results themselves seem to have been fraudulent and tabulated. The government never produced a final tally or breakdown of votes by polling stations. All blank ballots were counted as “yes” votes, and the government announced a three percent abstention rate in a country in which abstentions consistently average 15 to 20 percent. The CIA report leaves little to the imagination: “the record is clear that Pinochet’s underlying purpose was to establish a constitutional framework that would severely inhibit the power of future civilian presidents and the influence of traditional political parties and civilian pressure groups, as well as perpetuate military tutelage over the political process.”

Chileans rise up against the Constitution

Even in the context of the undemocratic nature of the referendum, Chile’s government proved remarkably stable for decades. But in October 2019, the country fell victim to widespread unrest. Protests against subway fare hikes in Santiago triggered nationwide protests over other social and economic issues: rising cost of living, health care, education, pensions, wages, and Chile’s political and economic model broadly. Increasing violence and arson led to a police crackdown on protesters, and the government declared a state of emergency.

Next, the military deployed in the streets of Santiago, resulting in more than 1,000 injuries and at least 20 deaths. A United Nations report accused Chilean police of many human rights violations, from several deaths involving state agents to 113 documented cases of torture, 24 cases of sexual violence, and widespread arrests. After months of instability, the government decided to announce the national plebiscite for a new constitution, to be held in October 2020, to decide if and by whom a constitution would be drafted. According to recent polls, more than 80 percent of Chileans are in favor of a new constitution.

Throughout the past two decades, the Constitution has seen numerous amendments to its fundamental authoritarian structure. In 2005, President Ricardo Lagos profoundly altered the constitution, shortening the presidential term from six to four years and eliminating the posts of appointed senators, many of whom had been military officers. Additionally, Lagos rehabilitated left-wing political groups and normalized democratic practices. But Chilean activists say these reforms are not enough; the constitution still enforces and entrenches the neoliberal economic policies that have fallen out of favor among younger generations.

Camila Arrayo, one of the leaders of the protest movement, explains her rejection of the current constitution. “This is a constitution that was written under the dictatorship,” she says, “and it does not represent the people—it is not the expression of any social or political consensus.” She points out that by failing to address the state’s responsibility to provide social welfare, the constitution led to meager public spending programs. In that sense, protesters’ demands for social security, health care, and pensions respond directly to the language of the original constitution.

Arrayo also criticizes the hyper-presidential system, which concentrates power within the executive branch, limiting the legislative agenda and providing no channels for public political participation other than occasional elections. As a result, Chile’s party system has always been dominated by two political coalitions: the center-left Concertación, which formed to defeat Pinochet and won every election until 2010; and the Alianza, which was historically associated with the dictatorship and protected its legacy for years after the transition.

This two-party system is possibly the most important cause of social stagnation, rising inequality, and insufficient popular input in political decisions. In an effort to avoid a repeat of the political chaos of the 1970s, the Chilean political elite has focused on consensus-building and closed-door negotiations. Minority parties cannot participate in political decision-making, or even civil society generally. What Chileans call the “política de los acuerdos,” or politics of agreements, brought political stability and economic growth to the country. But it came at the cost of socio-economic reform and democratic representation.

If voters approve the referendum, what should a new constitution bring to Chilean society? Pamela Pasache, the leader of the Ministry of Education workers’ union, hopes for a framework to pursue legislation related to education, health, water, and welfare. By reimagining the process of creating new laws, the constitution could create a bigger emphasis on human rights, while leaving decisions about education, health, pensions, and children’s rights to the populations that are most impacted by them.

The new constitution should also provide a framework to encourage political activity in civil society, and it should be more attentive and inclusive to the demands of minority groups and parties. Finally, it should facilitate the process of policymaking, even if that means relying less on consensus. If the referendum passes, Chile’s new constitution will hopefully provide a new democratic path for a nation that is bustling with distinct political identities, ideals, and visions for a more inclusive, expressive, and affordable future.

Correction: An earlier version of this article stated the referendum was to be held in April. Due to the outbreak of COVID-19, the referendum has been moved to October 2020 as of April 2020.