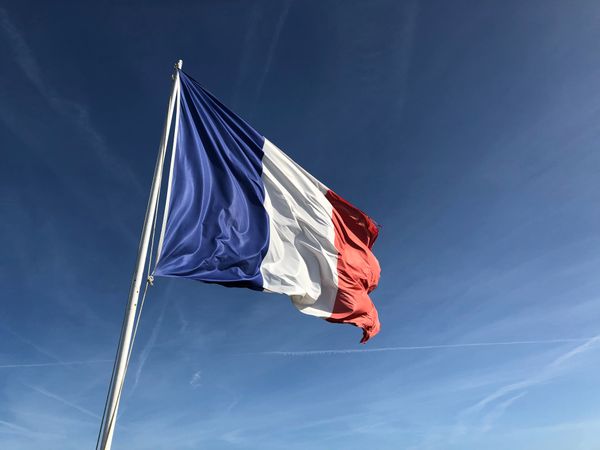 58.2 percent to 41.8.  “Emmanuel Macron est réélu" read the caption of a France24 social media graphic posted on April 24, 2022 with the winning percentage superimposed over an image of the triumphant Macron, the first French president to be re-elected since 2002. An image of Marine Le Pen, the candidate representing the far-right National Rally party, is left in the background of the graphic.

In the weeks preceding the two rounds of French elections, political commentators, and analysts drew several parallels to the political landscape leading up to the presidential election in 2016, and again in 2020, in the United States. The comparisons were apt; right-wing candidates exceeded expectations and left their respective countries wondering about both current and future political implications. The election of Donald Trump signified a critical rupture in American politics, with a vocal right-wing population edging the TV personality with no prior government experience to presidential victory. Similarly, the French elections in April were characterized by the largest share of votes for the far-right French candidate to date since the founding of the French Republic in 1958. While centrist Emmanuel Macron ultimately secured the victory, the powerful showing from the right was a defining feature of the presidential election. The results starkly contrasted those of the 2017 French presidential election which resulted in a comfortable victory for Macron who captured a significant 66.1 percent of electoral support versus Le Pen with only 33.9 percent.

Many political analysts point to the success of Le Pen and the departure from the 2017 outcome as representative of a shifting political scene in France, “a damning indictment on the state of French politics…” An increase in right-wing support was largely generated by resentment fomenting in France’s less affluent rural and suburban areas where working class voters reside in large numbers. The main pressure points for working class voters that Le Pen zeroed in on throughout her campaign included rapidly increasing inflation and diminishing purchasing power, largely in an attempt to galvanize support from frustrated workers and shift her perception away from prior narratives about immigration and national identity. The urban-rural divide was on display in the election results, highlighting profound divisions in political ideology and issue prioritization across geographic areas.

Further evidence of the rise of the right in France came in June’s legislative elections with the National Rally party winning a record number of seats in parliament and depriving Macron’s centrist coalition of a firm majority. Macron’s centrist movement won 245 seats, falling 44 seats short of the necessary threshold for a parliamentary majority. The far-left alliance, led by Jean-Luc Melenchon, earned 131 seats, and the National Rally saw a ten-fold increase in parliamentary seats with a record-high 89 seats. The National Rally now stands as the second largest party in Parliament after Macron’s party and has enough seats to form a parliamentary group which is essential for galvanizing support in the National Assembly. The influx of right-wing legislators will shift the balance of power and amplify support in the parliament for right-wing agenda items and policies, such as lowering taxes on energy and reducing immigration rates. The parliamentary results further support the notion that the contours of French politics are changing with the decline of France’s more centrist establishment parties, creating a void that both far-right and far-left parties could capitalize upon. This is the first time since the 1980s that the president’s party is not represented by a parliamentary majority, which will undoubtedly complicate the passage of Macron’s desired policies and reforms. In an attempt to already remedy this, Macron has since reshuffled his cabinet, “seeking a fresh start” in light of his alliance of centrist parties losing its absolute majority in the National Assembly. A reshuffled cabinet would ideally aid in bringing together a wider variety of party perspectives to appeal to a larger portion of legislators in the Parliament.

The fractured political scene in France evokes comparisons to the polarized climate in the United States. The current situation, one in which Macron will have to strategically navigate to win favor for his centrist alliance’s policies, is captured by CNN contributor David A. Andelman who described it as  “a trans-Atlantic carbon copy of Biden’s situation.” In the United States, the Democratic Party is in control of both the House and Senate, yet the party does not have enough representation to constitute the  supermajority needed to pass a large portion of legislation in the Senate. Macron will find himself in an increasingly similar position as Biden as he maneuvers in the coming months and years, negotiating with his political adversaries to cobble together legislation in line with his movement’s priorities.

The US and French political landscapes are distinct, yet striking similarities are evident. Right-wing politicians in both France and the United States (namely Eric Zemmour who was another far-right candidate in the recent French primaries and former US president, Donald Trump) share in their proclivities for denouncing “the liberalism of cultural institutions, namely the media and academia.” Fractured political scenes complicate the agenda of the nations’ presidents. And while political climates fraught with tensions are unideal for legislative progress, the current circumstances do provide a unique opportunity for Franco-American cooperation. Simply put, time is ticking for the enrichment of the transatlantic relationship under Macron and Biden. In both the United States and France, the next round of presidential elections in 2024 and 2027, respectively, could see an amplification of the current trend, in which polarization results from far-right candidates’ utilization of ideological extremism, becoming increasingly commonplace in politics. Research shows that voters on the ends of the ideological spectrum are most actively engaged when compared to more moderate or apathetic individuals in national politics by several measures. A study by Pew Research indicates that 85 percent of “Faith and Flag conservatives” positioned on the far-right of the political spectrum voted in 2020.

The election of a far-right candidate in either country could redefine both the priorities and the liberal, democratic values system currently upheld by the transatlantic partner countries as they both potentially careen into political climates characterized by polarization and the dominance of political extremes. This could yield dangerous consequences for broader geopolitics and foreign relations as far-right politicians and voters in both the US and France have previously (and still currently) sympathize with Russian president Vladimir Putin. A Yahoo News/YouGov poll from January 2022 found that 62 percent of Republicans and Republican-leaning independents consider Putin a “stronger leader” than US President Joe Biden. Similarly, Marine Le Pen has long kept “close ties” with the Russian regime as exemplified by her accepting of loans from a Russian bank to fund her party in 2017 and her support of Putin’s illegal annexation of Crimea in 2014.

In the remaining years in which their administrations overlap, President Biden and President Macron could capitalize on the political similarities of their respective countries at present by working toward common goals and interests. This would help shore up relations to gird US-French relations against future political uncertainties. Cooperation on areas of mutual interest could take shape in the economic, social, defense, and geopolitical realms, ranging from executing domestic legislation that directly address workers’ frustrations about soaring inflation and diminished purchasing power to orienting transatlantic collaboration to develop stronger European defense and security architecture to counter an increasingly assertive Russia. Domestic legislation is particularly relevant given that both inflation and diminished purchasing power acutely affect working class populations in both the United States and France. EU-US solidarity, as demonstrated in the months since Russia’s brazen invasion of the sovereign Ukraine in February of 2022, is more important than ever before. Coordinated foreign policies between France and the United States, an area that remains largely under the jurisdiction of the presidents, would enable a collaborative approach to tackling some of the most pressing illiberal threats.

Such coordination is already in the works as demonstrated by the inaugural meeting of the US-France Defense Trade Strategic Dialogue at the Eurosatory exhibition on June 13. The dialogue brings together a number of high-profile French and American leaders in strategic affairs, military affairs, international development for armed forces, and industrial defense. Composed of senior-level members of the US Department of State and Department of Defense and the French Ministry of the Armed Forces and Ministry of Europe and Foreign Affairs, the group will meet annually to work toward shared objectives pertaining to defense market access and cyber protection of defense and technical bases and other critical military infrastructure. This bilateral initiative is a tangible manifestation of the myriad of opportunities available for sustained strategic cooperation between France and the United States.

Similarly, opportunities for deeper collaboration exist in the form of Indo-Pacific defense. Despite a hiccup in Franco-American relations in 2021 due to the brief AUKUS trilateral security pact crisis, avenues for significant cooperation in this region remain. While France was carved out of the trilateral pact between the United States, the UK, and Australia, both the US and France have vested interests in the region and could benefit from mutual collaboration. While currently only two of many countries jostling for influence in the area, finding ways to pursue a coordinated approach between France and the US could yield benefits for both countries. France has the strongest military in the European Union with the second-largest economy, which makes it a suitable partner for the US to further work with, in parallel with the AUKUS group. Furthermore joint initiatives on cybersecurity (“Paris Call for Trust and Cybersecurity in Cyberspace”) and clean energy (“US-France Bilateral Clean Energy Partnership”) between the US and France offer yet another avenue for cooperation. US Secretary of Homeland Security Alejandro Mayorkas recently praised the current efforts between the US and France, but urged that the “transatlantic partners need to continue collaborating closely and sharing information” to combat the most urgent threats to cybersecurity. There remains ample room for enhanced, tangible cooperation under the framework of the United States-France Joint Statement, drafted in the fallout of AUKUS, which stresses the importance of “systematic and in-depth consultation and coordination” between Paris and Washington, particularly in the Levant and the Sahel.

The partisan parallels between the French and American political landscapes offer an opportunity for the two countries to engage in a meaningful way over the next few years. For example, while domestic tensions and polarization are dominating political dialogue in both the United States and France, the foreign policy space remains as a domain in which both Biden and Macron can operate at present in a way that is less encumbered by partisan divides. By maintaining a firm grip on foreign policy objectives and fostering cooperation for French-US solidarity, the two presidents can effectively address pressing issues through crafting coordinated approaches and executing tangible policy now regardless of any future political turmoil that may stem from future elections. Shifting political realities create space for Biden and Macron to capitalize on key areas of cooperation while such mutual interests remain – a timeline that is increasingly uncertain looking toward future presidential and legislative election cycles.