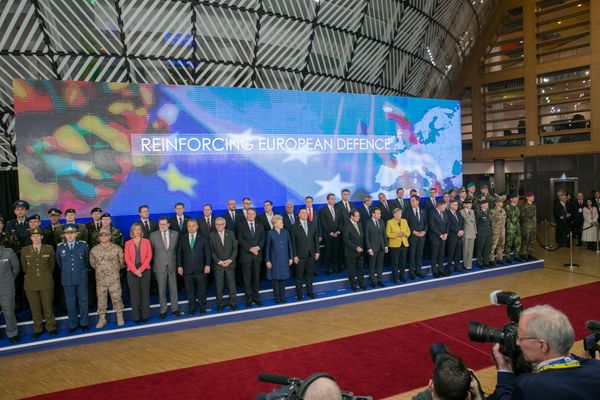 Europe's Old Beacon of New Hope: The Overdue Creation of a European Army

For more than seven decades, NATO has been an “anchor of stability and a beacon of hope.” North America and Europe have even been called “two sides of the same coin” with regard to international security interests. Since the end of World War II, the close ties between the two continents have guaranteed the security of the Western world. Yet, in early June 2020, US President Donald Trump announced plans to withdraw approximately 9,700 US troops from Germany, thereby reducing the United States’ military presence in the region by 30 percent. Former US Ambassador to Germany Richard Grenell explained the motives behind this momentous decision, criticizing Germany’s comparably low defense spending and describing how “[US] taxpayers are getting a little bit tired of paying too much for the defense of other countries.” From the US point of view, Germany, like most of Europe, has become an unreliable defense policy partner because of their insufficient financial support for NATO.

However, from a European perspective, Trump’s attacks constitute a threat to the alliance’s cohesion. After Trump suggested that the United States completely withdraw from NATO,  a mere 11 percent of Germans trust him to respond appropriately to global developments. With Russian military activities in Ukraine endangering Europe’s security from the east and Trump questioning the future of NATO from the west, the political leaders of the European Union now feel pressured to find new ways of ensuring the continent’s safety. German Chancellor Angela Merkel remarked how “the times, in which we could rely on others without reservations, are over. This means that we Europeans must take our fate into our own hands, if we want to survive as a community.” While Trump aims at strengthening NATO by having its members contribute an equitable amount of money, his decision to withdraw US soldiers from Germany may actually push the European Union toward developing its own military strategy. Trump’s pressure might actually promote the type of European military integration that has long been proposed but never fully realized.

In the 1950s, the leaders of six major European countries including Germany and France agreed to form the European Defence Community. Implementation, however, ultimately failed after a veto by the French National Assembly, which feared German rearmament so soon after World War II. Instead, Germany, along with the other major European powers, joined NATO to unite their various military forces under the US umbrella. As a result, the United States became Europe’s de facto military protector during the Cold War; it was not until the fall of the Berlin Wall for the idea of European military integration resurfaced again. Since the collapse of the Soviet Union, and the subsequently decreased military presence of the United States in Europe, numerous politicians—such as German Chancellor Helmut Kohl in 1991, French Prime Minister Alain Juppé in 1996, and British Prime Minister Tony Blair in 1999—have advocated for the implementation of a common European defense union. Yet, all of this grand rhetoric only turned into minor actions.

It took until 2004 and the establishment of the European Defence Agency (EDA) for the first political step toward European military integration, providing an informal forum for European ministries of defense to collaborate without any kind of legal framework. Eventually, the 2009 Treaty of Lisbon built a statutory foundation for European military cooperation and even included a Mutual Assistance Clause in case one member state would become the victim of “armed aggression on its territory.” For the first time, military integration had become a formal item on the European agenda. Today, initiatives such as the Permanent Structured Cooperation (PESCO), the European Defense Fund, and an annual Review of (European) Defense try to deepen the continent’s military cooperation by financing collaborative defense industrial projects and synchronizing the member state’s individual defense plans with one another. This institutional groundwork has enabled the various European Union member states to jointly carry out military and civilian missions across Europe (Ukraine, Bosnia, and Herzegovina), Africa (Somalia and Mali), and Asia (Georgia and Afghanistan).

Despite these promising developments, European military integration still faces many of the same challenges that existed in the 1950s. Some countries freely deploy their military personnel across the globe: France was the driving force behind the ouster of Libyan dictator Muammar Gaddafi in 2011. Other countries, like Germany, have considerable reservations about assigning their soldiers overseas. These asymmetric security preferences combined with the consensus-based institutional organization of the European Union make it difficult for member states to agree upon joint military operations. The addition of growing Euroskepticism among numerous member states makes it very unlikely that a full supranational military force could ever replace national armies. Not only do most countries still value their own military sovereignty over cooperative efforts, but the complicated institutional organization of the European Union would make an efficient military crisis management of a European army almost impossible. Cooperation between countries’ individual armies, then, appears to be the only viable option to further European military integration.

However, even joint military missions are strained in the context of COVID-19. As the EU faces GDP declining by more than 12 percent, the continent’s defense expenditure will likely be severely restricted. While a similar phenomenon occurred after the global economic crisis of 2008, the impact on Europe’s defense budget will be even greater this time around. Experts have already warned that this looming decrease in military spending could have massive negative effects on European military integration. If European leaders do not act decisively, the progress made toward a European defense community might be lost—possibly forever.

Moreover, external pressures from international actors could seal the fate of Europe’s joint defense aspirations. The United States in particular has strongly resisted EU attempts to develop its military capabilities, worried these efforts could limit US control over regional military decisions. The United States also fears European military integration for economic reasons: a united European defense community could exclude US defense contractors. US ambassador to NATO, Kay Bailey Hutchison, acknowledges how “we do not want this to be a protectionist vehicle for the EU…. We want the Europeans to have capabilities and strength, but not to fence off [US] products.” US opposition to extensive European military integration, whether through indirect political pressure or aggressive lobbying within the European Parliament, is as old as the idea of integration itself.

The removal of US troops from Germany could make European leaders realize how the United States’ current economic priorities have dominated their traditional strategic political alliances. Security experts like diplomat Wolfgang Ischinger have warned for almost five years that “[while] a strong transatlantic partnership will remain the best security guarantee for Europe, this preferred option may not be available in the future.” Current polls indicate that 75 percent of Europeans advocate for common defense and security policies, and that 68 percent would like the European Union to cooperate more closely on defense. At any rate, European citizens seem to have understood these warnings. It remains to be seen if the politicians have. If former US Vice President Joe Biden, an outspoken advocate of refreshing transatlantic relations and strengthening NATO, wins the US presidential elections in November, European leaders may easily fall back into the habit of relying on their American ally. Attempts to increase European military integration would once again amount to little.

Alternatively, the European Union could take the numerous warnings of security experts seriously and could satisfy the populace by furthering a holistic European defense strategy. A unified military would finally allow Europe to properly defend itself without having to rely on the assistance of outside forces. How? Simple coordination and an expanded mandate of the European Defence Agency would be sufficient. Importantly, none of that would necessitate the surrender of national military sovereignty, and coherent individual defense spending plans and joint investment into European industrial defense projects would actually allow member states to save money. There is no lack of arguments for military integration and no lack of ideas for how to achieve such integration; there is only a lack of political determination.

For more than seven decades, EU member states have claimed that they do not want to lose their military sovereignty to justify implementing halfhearted integration policies. US military assistance lulled Europe’s leaders into a sense of security and made the hurdle of establishing a European army appear insurmountable. Now, Trump’s decision to withdraw soldiers from Germany could finally push the European Union toward developing its own military strategy. While North American and European international security interests might have once been two sides of the same coin, this perception has masked what is possible under a united European front. It is time to put the topic of further military integration on top of the continent’s political agenda; the future of Europe depends on it.