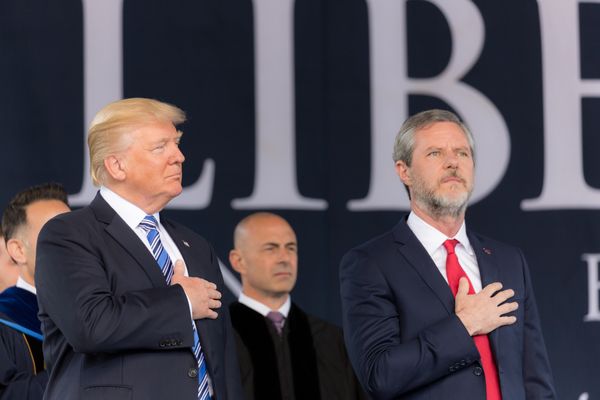 Divinely Divided: Trump and the Mandate of Heaven

Dr. Patrick Mendis is a Taiwan fellow of the Ministry of Foreign Affairs of the Republic of China and a distinguished visiting professor of global affairs at the National Chengchi University in Taipei. The views expressed in this article are his own; they do not represent the institutions of his past or present affiliations.

Soon after the US airstrikes killed the top Iranian General Qassem Suleimani in Iraq, leaders in Tehran vowed to attack the US military bases and servicemembers. In his response, President Donald Trump threatened to target 52 Iranian assets, including the United Nations Educational, Scientific, and Cultural Organization (UNESCO) sites in the Islamic Republic. The number references the 52 American hostages held in Iran during the 1979 revolution.

As both domestic and international hostilities against President Trump began to multiply, he backed down from his initial threats and partially retracted his combative rhetoric. In Trump’s first public appearance since giving the order to assassinate Suleimani, Pastor Paula White, televangelist and new White House aide, gathered a group of evangelical Christians at the King Jesus International Ministry in Miami. There, the president singled out two Democrat congresswomen—Somali-American Ilhan Omar of Minnesota and Palestinian-American Rashida Tlabi of Michigan—denouncing their “hate” for Jewish people before claiming that God is “on our side.”

For the die-hard evangelical Christian base of supporters and financiers, President Trump is the champion of religious faith. Their political and religious agenda is cleverly shrouded in the Prosperity Gospel of health and wealth creation. Despite Trump’s lack of clear “Christian” values, this cohort of Christians has come to consider Trump their “savior.” His decisions to ban Muslim immigrants from select Arab countries, build a wall on the Mexican border, and decry people of color and disability are clear evidence of a new strand of paleoconservatism. Even without the knowledge of religious values we would expect from a conservative president, Trump has cast himself as a defender of those values.

When President Trump decided to abandon Kurdish allies fighting to defeat ISIS in Syria and allowed Turkish forces to threaten them, Reverend Pat Robertson—the 90-year old patriarch among the influential televangelists and the founder of Christian Broadcasting Network—was enraged by Trump’s actions. He criticized Trump and called Turkish President Recep Tayyip Erdogan a “thug.” In his weekly 700 Club television show on October 7, 2019, he lamented that “the president of the United States is in danger of losing the Mandate of Heaven if he permits this to happen.”

The Mandate of Heaven, or Tianming, is an ancient Chinese political and religious doctrine. It justifies the rule of the emperor according to the natural order of the moral universe and the supreme will of the celestial power. If a Chinese emperor was unfit to govern, calamities (usually in the form of natural disasters) ensued, and the mandate was withdrawn with the appropriate justice of reward and revenge. Reverend Robertson’s subtle use of the Chinese phrase was to send a coded message, which other US leaders often referred to as “Providence” or “Nature’s God” as enshrined in the Declaration of Independence.

In her closing statement in Trump’s impeachment inquiry, Speaker Nancy Pelosi of the US Congress said, “In signing the Declaration of Independence, our founders invoked a firm reliance on Divine Providence.” She then added, “Democrats too are prayerful, and we will proceed in a manner worthy of our oath of office to support and defend the constitution of the United States from all enemies, foreign and domestic, so help us God.” Apparently for Reverend Robertson, Trump acted more like a Chinese emperor or a dictator than a leader of the free world.

Unlike the two previous impeachments in US history, which were linked to domestic issues involving Presidents Andrew Johnson in 1868 and Bill Clinton in 1998, Trump’s impeachment involves foreign policy with Ukraine and personal gain over a political opponent. But that was not enough to shake the faith of the religious; in this case, Trump’s Mandate of Heaven is nearly irrevocable. When an editorial in the flagship evangelical magazine Christianity Today described President Trump as “immoral” and called for his removal from office in December 2019, a conservative group of evangelical leaders and commentators rallied around the impeached president, condemning the right-wing publication instead.

America, On Your Own

As the United States has turned away from multilateralism on the world stage, most notably by pulling out of the Iranian nuclear agreement, China and Russia have maintained closer commercial and military relations with the government of the Ayatollah Khamenei. After US sanctions imposed on Iran, both China and Russia have pursued arrangements for Iranian oil to avoid transactions in US dollars. More importantly, the increasing convergence of trilateral joint naval exercises in the Gulf of Oman is a direct challenge to US influence and military posture in the Middle East. “The most important achievement of these drills... is this message that the Islamic Republic of Iran cannot be isolated,” said Iranian Vice Admiral Gholamreza Tahani in December 2019. The naval commander then added, “these exercises show that relations between Iran, Russia and China have reached a new high level while this trend will continue in the coming years.”

In June 2019, Iranian President Hassan Rouhani met with Presidents Vladimir Putin of Russia and Xi Jinping of China at the Shanghai Cooperation Organization in Bishkek, Kyrgyzstan. The joint naval exercises and commercial diplomacy have served each well. Russia validates itself as the primary geopolitical actor in the region after Putin’s recent success in Syria and Turkey. China demonstrates itself as the key geo-economic and global naval power with having its first military base in nearby Djibouti. And Iran acts as a regional power in the Middle East to counterbalance the US-led coalition including Bahrain, Saudi Arabia, and the United Arab Emirates. Their commercial and diplomatic links with China and Russia have, indeed, become stronger since Trump's inauguration.

Australia and the United Kingdom have agreed to send their warships to safeguard the oil shipments in international waterways and to preserve the freedom of navigation. However, other frustrated European allies feel jilted after Trump's unilateral withdrawal from the Iran nuclear agreement and the Paris climate agreement, as well as his mockery of NATO allies; many now work closely with Chinese and Russian leaders. To many world leaders, the killing of Suleimani reads like a carefully choreographed choice rather than an act of necessity, meant to rally Trump’s evangelical and conservative base in the wake of his impeachment. Even taking Suleimani’s depraved history into account, the timing of Trump’s assassination order without credible evidence to support “imminent danger” has already raised legal issues within domestic laws and international conventions.

In a phone call to his Iranian counterpart, Chinese Foreign Minister Wang Yi condemned the “military adventurist act by the US” that “goes against basic norms governing international relations and will aggravate tensions and turbulence in the region.” Tehran then stated that Beijing could “play an important role in preventing escalation of regional tensions” and would supplant an increasingly unreliable and erratic United States. Similarly, when the Iraqi legislature recently voted to expel all US forces, the bellicose President Trump threatened Iraqi leaders with sanctions, pushing them into the waiting arms of revisionist powers. Iraq and China, for example, have already strengthened their economic relationships as they have negotiated massive trade and construction deals. Case studies like these reflect why experienced officials like former CIA director Michael Hayden call Trump a “Russian asset.”

Nevertheless, the Trump administration has pursued a mostly hardline policy toward Iran, favoring Middle Eastern allies’ immediate concerns over regional stability. A Washington Post analysis highlights that Secretary of State Mike Pompeo, for example, has tried “a maximalist position on Iran.” Before that, as the CIA director, Pompeo set up an Iran Mission Center at the agency. The Post then provides part of the rationale: these acts made Pompeo “popular among two critical pro-Israel constituencies in Republican politics: conservative Jewish donors and Christian evangelicals.”

Enlisting God for a Christian Theocracy

Throughout history, politicians and military leaders have been cautious about the ways their actions are perceived by some divine power. Writing in 1875, Otto von Bismarck cautioned Wilhelm I that “I would... never advise Your Majesty to declare war forthwith, simply because it appeared that our opponent would begin hostilities in the near future. One can never anticipate the ways of Divine Providence securely enough for that.” Benjamin Franklin, a Founding Father and deist, also described his belief in divine intervention decades earlier: “I have lived, sir, a long time; and the longer I live, the more convincing proofs I see of this truth—that God governs in the affairs of men. And if a sparrow cannot fall to the ground without his notice, is it probable that an Empire can rise without his aid?”

Now, as one party claims a near-monopoly on evangelical voters, there is less room for performance-based legitimacy. To be conservative is to be godly, to be liberal is to be godless. But it was not always this way. Just like under the Mandate of Heaven, religion has provided a sense of karmic justice in US history involving rewards and punishments for the individual ruler and collectively for particular group or geography. As Secretary of State John Quincy Adams put it in 1821, the need of government to be “the great moral purposes of society... founded in the laws of nature and of Nature’s God.”Henceforth, Adams counseled that the United States “goes not abroad in search of monsters to destroy. She is the well-wisher to the freedom and independence of all. She is the champion and vindicator only of her own. She will recommend the general cause, by the countenance of her voice, and the benignant sympathy of her example.” That kind of US authenticity and goodness must return—the United States is divine not for its institutions, nor its leaders, nor its actions, nor its people, but for the sum of all those things.

Non-Existent Humans: How Stateless Persons are Forced to Work Informally

Surveying the World of Informal Work: Interview with Sally Roever

Rape in Bangladesh: An Epidemic Turn of Sexual Violence

The Renaissance of Water

West Africa and COVID-19: A Model for Effective Mitigation with Limited Resources