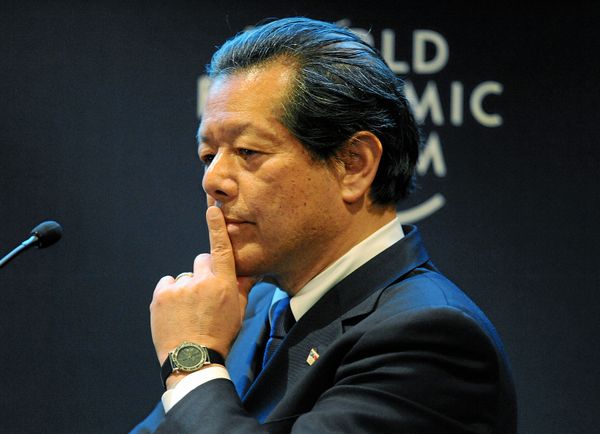 Dr. Yoichi Funabashi is a former editor-in-chief of Asahi Shimbun, Japan's second-most circulated newspaper. He now serves as a chairman of Asia Pacific Initiative, an independent think tank based in Tokyo. He has written extensively on geopolitics, the US-Japan Alliance, and China.

How do you assess the impact of the current "Phase One" partial US-China trade deal? Does its limited degree of tariff reductions and ambiguous reference to China's purchase of agricultural products provide relief to the economy of respective countries? ‌‌

The issue with this "Phase One" agreement is that it would not achieve the sustainable reduction of the US trade deficit—despite it being the primary reason why the Trump administration commenced this trade war. The administration has the conviction that a trade deficit is bad and that China, a country with the largest trade surplus, is exploiting the United States. However, unless the structure of the US economy (and specifically the relationship between saving and investment) changes, artificially limiting Chinese exports to the United States does not meet this objective. China can still sell its goods to the United States via a third country, or US companies can purchase goods from other countries. ‌‌

If the Trump Administration understands that tariffs alone cannot reduce trade deficits, it may choose exchange rate regimes as another medium for US-China competition. Last August, the US Treasury designated China as a currency manipulator after the Chinese yuan weakened past the psychologically significant point of seven yuan to the US dollar for the first time in more than a decade. Although the United States dropped this designation on January 13, 2019, the development raised concerns that China is arbitrarily devaluing its currency to make its exports competitive.   ‌‌

My prediction is that, if Trump wins a second term, he will even more strongly demand Chinese currency appreciation. We may witness some agreement similar to the Plaza Accord, a joint agreement in 1985 that depreciated the US dollar against the Japanese yen and German mark, but with a focus on Asian nations, including China, South Korea, and Malaysia. ‌‌

Another issue at play in this US-China economic dispute is technology. The current deal does not address this point, be it China's industrial policies or the treatment of Chinese tech companies such as Huawei. On this, US-Japan negotiation on semiconductors in the 1980s provides a relevant precedent. At the time, Japanese firms boasted half of the world's semiconductor production, and US manufacturers heavily relied on Japanese semiconductors. On a national security basis, the United States insisted strongly that Japan should stop its dumping and industrial policies that protect its semiconductor industry, and the agreement in 1986 obliged Japan to secure 20 percent of its domestic semiconductor market for foreign producers. This was the most contentious issue in the US-Japan trade war in the 1980s. I believe that technology will be a significant challenge to the settlement of the US-China trade war as well. ‌‌

Overall, I would say that this deal involves less concession on the part of China than the United States. With the 2020 US presidential election in sight, the Trump administration chose to showcase tangible progress in the US-China negotiation irrespective of the substance of the agreement. ‌‌

Given this context of technological rivalry and the US government's concern over Chinese industrial policies, what are the challenges facing the Phase Two negotiation? ‌‌

One challenge facing the negotiation is the rise of nationalistic sentiment in China. Popular support for anti-American rhetoric would make it more difficult for the reformist wing within the Chinese government to utilize US pressure as an excuse to advance structural reform. For example, some reformists within the CCP (Chinese Communist Party) side with the US government in their opposition to China's preferential treatment for state-owned enterprises. They are concerned that such a measure would hinder the development of private enterprises and harm the long-term health of Chinese economy. Nevertheless, China's increasingly nationalistic public puts them in a political deadlock if they are to challenge President Xi's defiant attitude toward the trade war. ‌‌

There is also a risk on the US side. Let's say China executes the structural reform of its economy as the United States has demanded. The Chinese economy could become more robust and sustainable as a result: some in the United States might see this undesirable from a strategic viewpoint. One approach in strategic competitions is to make the opponent weaker. Those who want to undermine China's geopolitical clout relative to the United States may attempt to shift the agenda of the negotiation from pushing China's economic reform to encouraging China's inefficient investment in military and other sectors, trying to exhaust China's economic vitality. ‌‌

How do you assess China's efforts to assert global leadership in critical technologies such as 5G telecommunication networks, quantum computing, and biotechnology? ‌‌

It would be practically impossible, from my perspective, to prevent China from dominating these fields. Throughout history, nations achieved innovations through importing state-of-the-art goods and technology from more advanced nations. Japan, for instance, successfully integrated Western technology and their industrial system into its society after the Meiji restoration. China's Qing dynasty, on the other hand, maintained its isolation from the outside world and failed to recognize its technological inferiority to Western powers, which led to its demise. The current Chinese government is keen to learn from this mistake. It has invested an enormous amount of resources in learning from other nations' historical lessons in technological development and multinational negotiations.‌‌

My point is that we should not underestimate the prospect of China's state-sponsored technological development just because its political system is undemocratic. The widespread view is that China's repressive social order and the lack of political freedom kills human imaginations, discouraging scientific progress and innovation. I myself find it doubtful whether China's political system, one that drives people with fear, is sustainable in the very long run. However, as far as the status quo is concerned, China's massive marketization of mobile payment and bike-sharing demonstrates its success. In a technological rivalry among nations, the ability to commercialize emerging technologies, disseminate them to a wide array of customers, and maintain them as social infrastructure is as crucial as the invention of technologies itself. China's edge in this systematic deployment will position the country on a path to assert technological leadership. ‌‌

What would be the implications of China's state-sponsored technological development on its political system and economic model?‌‌

For these latest technologies that China is eager to develop, the main customer is the CCP government. Whether it is 5G networks, Big Data, they are tools for CCP to maintain their regime, never to repeat the equivalent of the Soviet Union's collapse. Chinese government's plan to create a special economic zone for digital currencies in Shenzhen and Suzhou is another display of its risk-taking attitude to enhance economic security. It aims to establish a closed payment mechanism independent of the US dollar, which would make Chinese financial institutions less susceptible to potential US sanctions on them (Patriot Act Section 311) and prevent capital flight. ‌‌

Besides, China-produced mobile payment methods, namely Alipay and Wechat Pay, are expanding their businesses in countries involved in China's Belt and Road Initiative. Combined with digital currencies and surveillance technologies, China is capable of exporting its economic model of digital Leninism. It is a worrying trend in the context of privacy protection; yet there is a positive aspect. This government-monitored system of finance, if purely functions around its social credit system, can prove more inclusive to those who otherwise have not enjoyed access to traditional types of banks. This is because one's credibility as a borrower would be the only factor to consider when lending, as opposed to other backgrounds such as gender and ethnicity. It may empower a large number of women and rural populations. ‌‌

What do you think is a long-term threat to the Chinese economy?‌‌

There are two major threats to its economy. The first is demographics. Its population is quickly aging, mainly because of its past policy to limit the number of children one couple can have. The government is yet to establish an effective social welfare system that would sustain its ever-growing elderly class. The second issue is ecological degradation. China will suffer from deforestation and the potential depletion of water in two of its most important rivers, the Yellow River and the Yangtze. Climate change endangers the water supply of not only China but also Southeast Asian nations, including India and Bangladesh. ‌‌

HIR: How do you see the political uncertainty in Hong Kong unfolding?‌‌

The economic significance of Hong Kong to Beijing's central government has decreased. When Hong Kong returned to China, it accounted for 18 percent of China's GDP. Now it is only around three percent. Shenzhen's GDP overtook that of Hong Kong in 2018 for the first time. However, as we can see from the initial public offering of Alibaba that happened in Hong Kong, the city still provides and will continue to provide an intangible yet crucial network of global finance to the Chinese mainland—a role that other Chinese cities cannot easily replace. Beijing is not fully aware of Hong Kong's importance beyond its economic size, and this lack of awareness will prolong the political unrest within the city. ‌‌

What would be the long-term response from the United States to China's ambition to construct its economic model and disseminate its political ideology abroad?‌‌

It is becoming more and more of a bipartisan consensus that Obama’s approach of strategic engagement with China has ended and that China is now a strategic competitor and a disruptive force against the traditional US-led liberal international order. However, it is unlikely that US policymakers see China as a pressing military threat over the next ten years: China itself does not have an intention to overhaul the existing political arrangement between the two nations. The United States and China will probably compete in almost every domain short of war. ‌‌

If the aspect of US-China relations as a strategic competition gets emphasized more, some US policymakers might consider taking more intrusive measures aimed at destabilizing China's social cohesion, for example supporting the separationist movement in Xinjiang. Still, we should keep in mind the risk that this kind of intervention works counter to its objective. When the CCP faces domestic unrest and pressures, it often resorts to more confrontational measures overseas, fueling nationalistic sentiment. Increased tension in, say, the South China Sea is likely when the United States attempts to question the legitimacy of CCP rule from the inside. In fact, the world has never witnessed China as powerful as it is today. Since the Opium War, China was subject to Western expansion and exploitation. We need a paradigm shift in how we approach this awakened giant. ‌‌‌‌