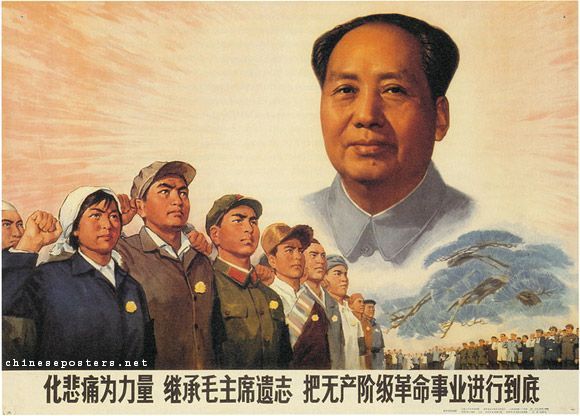 Ubiquitous and impossible to avoid, Chinese propaganda posters were mass-produced, easily and cheaply available at the Xinhua (New China) bookstores. Posters carried normative or political messages, but they also brought some color to the places where people lived. Posters reached all levels of society: they adorned offices and factory workshops, houses and dormitories. Schools used posters for teaching; factories, Party offices, People’s Liberation Army meeting rooms, shop floors, community rooms, etc., all had posters on their walls. Some images were turned into bookmarks, appeared on biscuit tins, mirrors, cigarette packages or matchboxes; a few even were made into postage stamps.

I became interested in Chinese propaganda posters in the early 1970s for their use of art for propaganda purposes, and Chinese propaganda happened right before my eyes. Chinese propaganda had appealed to Westerners from the founding of the People’s Republic of China (PRC) in 1949. Some sympathized with the new regime, while others saw the poster art as something deliciously alien, subversive and mysterious. However, it was difficult to get hold of propaganda posters outside of China. Only foreign “friends” who were officially invited to visit and witness the changes the nation was going through had the opportunity to acquire them first-hand. Posters served as a kind of souvenir from revolutionary China, as opposed to the more traditional handicrafts (silks, silk screens, calligraphy scrolls, carvings, etc.). Later, in the late 1960s, the People's Bookstore (Renmin Shudian) branches in Western countries and other shops specializing in printed materials put out by European Maoist and similar politically “progressive” fringe groups made them available. Also, I got in touch with the Chinese international distributor, the Guoji Shudian Company in Beijing, directly. Guoji Shudian sent out type-written lists of posters, which I could order.

Although the propaganda poster dominated the political and public reality of the PRC, propaganda art was not a new medium. Throughout its long history, the Chinese political system has actively presented and spread its ideas of correct behavior and thought. It used paintings, songs, high- and low-brow literature, stage performances and other artistic forms, such as New Year prints, to make sure that the cultured elite and illiterate masses behaved as they should. After Imperial rule ended in 1911/12, both the Nationalist Party and the Chinese Communist Party (CCP) employed visual art as a weapon to spread their messages, and gain adherents and power. Propaganda posters played a major role in the many campaigns that mobilized the people after 1949, and became the favored medium for educational purposes; they could easily reach the large number of illiterate Chinese in the early decades of the PRC. The government employed the most talented artists, many of them former commercial designers, to design the posters. The poster images did not show “life as it is,” but “life as it ought to be,” stressing the positive and glossing over anything negative.

After 1949, pursuing hobbies like collecting came in for criticism as “wallowing in petty bourgeois amusements.” The omnipresence of the posters in public and private also held many Chinese back from collecting them, because they appeared to have no value whatsoever. This changed when the nation embraced the policy of reform and opening up to the outside world in the early 1980s. Some Chinese started collecting “calendar girl” posters, advertising posters from the 1920s and 1930s in an Art Deco-inspired style. Posters from certain eras however, such as the Great Leap and the Cultural Revolution, brought political risks to the collectors; the leadership was still debating the official verdict on these events. Collecting such materials could land the collector in political trouble.

Once China allowed visitors from the West in the late 1970s, collecting became easier. I and other Western poster collectors merely needed to find the nearest local Xinhua bookshop in every city or town we went to. Each Xinhua bookshop had a poster section, with all available posters on display. When I went into a Xinhua bookshop during my first visit to China in 1980, it was like entering poster heaven.

The Xinhua bookstores no longer sell posters. After 2000, nationally produced poster campaigns largely came to an end and television became the medium of choice to spread propaganda. Presently, other media and formats are also employed, such as popular music, films, and computer games. The Internet offers a large number of online promotional clips, animated video clips and music videos extolling government policies and their successes. The posters have been relegated to open antique markets like Baoguosi and Panjiayuan, both in Beijing, where collectors, foreign and Chinese, young and old, converge during the weekends. Most Chinese seem to collect something these days, and growing numbers of them are interested in posters, rationing coupons, Mao buttons, Red Guard uniforms, and other objects, mostly because of their potential, future value. Private sellers, often collectors themselves, have emerged as the most valuable source for buying posters. The Internet also is now a major source for acquiring posters. A number of Chinese sites specialize in posters, although it is risky to ascertain the authenticity and quality of posters on the basis of a digital scan.

Together with the Chinese poster holdings of the International Institute of Social History, Amsterdam, The Netherlands, and the collection of an unnamed private collector in Amsterdam, my collection is one of the most comprehensive collections in the world outside of China, totaling more than 10,000 items. A considerable number of images from these combined collections are accessible online, with information about date of production and the designers. The two sites aim to make as many high-quality scans of Chinese propaganda posters as possible available in the public domain. The three collections collaborate in the Chinese Posters Foundation and are still expanding.

I picked up 30 to 40 percent of my collection from the Xinhua bookstores in the period 1980-1995. Later additions largely came from private sources. After my first study on the subject appeared in 1995, the circles of collectors that had emerged in China in the 1990s classified me as a collector and not a dealer; this enabled me to develop relations with many Chinese collectors all of over China. Presently, I collect through Internet offers from these collectors and by going to China, to maintain contacts and scour antique markets. My earliest posters date from 1937, a series devoted to the Anti-Japanese War that I acquired outside China. My most recent ones are posters from 2015, published for official use on the occasion of the 70th Anniversary of the Victory of the Chinese Anti-Japanese War and the Global War Against Fascism in August 2015.

The increased demand for posters has driven up prices in recent years, while the number of interesting posters on offer has decreased dramatically. The posters one could pick up in the 1980s for only two mao (approx. US$0.03 in January 2019 prices) now fetch up to 2,000 yuan or more (US$281 based on January 2019 prices). On many urban street corners, cheap fake posters, mainly recent reprints, are on offer. For those not in the know, and even for those who are, with ever improving printing and copying techniques and facilities, it has become increasingly difficult to distinguish the real from the fake.

Chinese collectors have an advantage over non-Chinese collectors because they speak the language, know the culture, and often have extensive contacts or networks sourcing interesting materials for them. While the widespread use of the Internet has made it easier for Western collectors to identify and communicate with potential Chinese poster sellers, it has also made collecting more complicated. It is difficult to establish the authenticity of posters offered on the Internet, and shipping them, clearing (Chinese and Western) customs, payments, etc., can also pose problems.

The market for posters exists only in China, even though Western collectors participate in it. Incidental Western auctions aside, the market for posters outside of China is very small. There is no set price for a poster and the pricing policies and strategies are opaque: one seller may sell a poster for a lower price than another; today’s price may be higher than yesterday’s; buying in quantity may get one a better price; a Chinese customer may pay a lower price than a foreign one, etc. The absence of an objective, binding pricing system makes poster appraisal extremely difficult.

Despite rising prices and dwindling supplies, every time I go to China I encounter posters I did not know existed beforehand—posters that I am desperate to add to my collection. I know that other collectors have the same experience. The chance to stumble upon an unexpected find, to haggle for a better price, to scour markets—all these aspects urge me on in my quest to bring together the most comprehensive Chinese poster collection possible.

Not much is left of a genre, then, that once set out to inspire the Chinese people, to mobilise them, and to point them the way to a future Communist utopia. However, since Xi Jinping has come to power in 2012, propaganda has returned with a vengeance, largely informed by the concept of the Chinese Dream. Xi introduced his vision of this Dream shortly after he was elected into office. The Dream initially sounded elusive and nobody seemed to know what it entailed beyond “realizing a prosperous and strong country, the rejuvenation of the nation and the well-being of the people.” By now, it has been fully embraced in political and popular culture and the urban landscape again is festooned with official imagery in a way that has not been seen for a long time. Most of these images come from a single source, the China Civilization Office under the CCP Central Propaganda Department, and are available in high resolution from the Internet for reprinting or for use on various media. China Dream posters are not for sale. Unfortunately, not all of the later additions encountered in the streets can be found on the Civilization Office’s website, which seems not to have been updated since its inception in 2013.

The posters produced for the Dream-campaign do not attempt to mobilize into action at all. They consciously hark back to an often idealized, harmonious and caring past, explicitly referencing the Confucian tradition that was combatted so fiercely during numerous earlier periods. As before, many people find the posters quite pleasing, relatively unobtrusive, familiar and non-confrontational. The Dream posters are easily taken for granted because they seem unavoidable; there is no reason to assume that their messages are not passed on. Moreover, the images often hide the less desirable aspects of urbanization, as when and where they obstruct the view on building sites or inhabited, but run-down housing stock occupied by migrant workers or slated for demolition. Because of their official nature, they moreover seem to be largely protected from the activities by graffitists, thus contributing to the more colourful, more orderly impression that the street scenes make.

Yet there are also considerable numbers of urbanites from all walks of life who resent this renewed propaganda bombardment, stating that it is just “garbage.” They insist that they do not like the images, that the funds involved in rolling out the campaign could be put to better uses benefitting the ordinary people, and that the more frequent and persistent the exhortations, the falser the sentiments expressed are. This may be the most interesting and unexpected effect of more than six decades of propaganda dealing with political, social, and normative issues: that the people are able to express their ideas about it, both positive and negative, and have the freedom and vocabulary to do so.