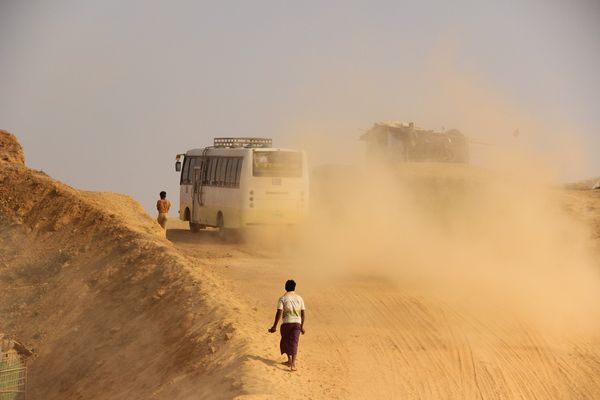 From Persecution to Pandemic: COVID-19 in Rohingya Refugee Camps

This year, most societies and lives have been transformed by practices to slow the spread of COVID-19. Cities and countries have imposed sweeping stay-at-home orders for residents, quarantining millions of people around the world. Though critical in slowing the spread of the virus, these mitigation measures have been increasingly difficult to implement in refugee communities. The potential consequences of an outbreak within refugee camps would be catastrophic, as evidenced in the Rohingya Refugee Camps in Bangladesh.

In the majority of countries, the most prevalent public health changes practiced and advised by citizens include wearing cloth face coverings in public, social distancing (staying at least six feet from strangers), reducing public outings, washing hands often with soap and clean water, and monitoring personal health and temperature. Even as citizens begin returning to normal life, restaurants work at limited capacity, employees take their temperature before beginning shifts, and universities plan for online instruction.

Best practices have been difficult to implement in high-risk cities like Phoenix, Arizona, but are nearly impossible to accomplish in the world’s largest refugee camps, where people are unable to practice even the basic precautions of social distancing. The Rohingya refugees, from Myanmar but currently residing in Bangladesh, are an example of the risk and severity of a COVID-19 outbreak within refugee camps.

From the Rakhine State of Myanmar, the Rohingya people are an ethnic community of largely Muslim people. The Rohingya people claim to be descendants of Arab traders throughout the region, but the Myanmar government insists that they are illegal and unrecognized immigrants. In 2017, 745,000 Rohingya people fled into Cox’s Bazar of Bangladesh to escape persecution and violent atrocities committed by Myanmar. Local estimates claim that the death toll was 400 people. However, the UN estimates that approximately 6,700 people died, including over 750 children under the age of five, and has attempted to hold Myanmar responsible for the atrocities. The situation of the Rohingya people had recently begun to stabilize as a result of humanitarian aid, but the Rohinya are still at risk of monsoon storms and are highly dependent on the aid they receive. Now, the Rohingya refugees face an additional challenge: the possibility of a COVID-19 pandemic in the refugee camps.

Approximately 626,500 Rohingya refugees live in Bangladesh’s Kutupalong-Balukhali Expansion Site. This site is one of the most densely populated communities in the world, with nearly 46,000 people per square kilometer. The Rohingya people already face health issues and have limited access to health services. There are estimated to be 0.31 physicians and 0.12 nurses per 1,000 people in the country—far less than the WHO suggested amount of 4.5 health workers per 1,000 people—working in conditions with limited infection preventative measures. Statistical models have been constructed to demonstrate the harrowing potential of COVID-19 within Rohingya refugees in the expansion site.

Although it can be expected that it would be difficult for the Rohingya people to combat COVID-19, the full extent of the virus is more complex to estimate. Researchers modeled the results of COVID-19 transmission under three different possible transmission levels: low (high levels of isolation and control of the virus), medium (similar to the beginning stages of COVID-19 in Wuhan), and high (similar to other virus outbreaks in open communities). The researchers’ findings were based on models from populations in Shenzhen, China and did not integrate complex or theoretical estimates, such as increased death rates after medical resources in the region are exhausted.

The figures of estimated COVID-19 transmission in the Kutupalong-Balukhali Expansion Site are not promising due to the site’s inherent qualities of malnutrition, poor overall health status, underlying disease, lack of clean water and soap, and large, crowded households. The underlying health issues already burden the health infrastructure in the Cox’s Bazar of Bangladesh, which further inhibits the potential response to a COVID-19 outbreak. Estimates from low to high transmission rates predict that, within one year of the COVID-19 virus being introduced to Rohingya refugees, infection rates would be between 73 percent and 98 percent. These infection rates would cripple a refugee community that has already faced persecution from the Myanmar government, which the UN has determined to have “genocidal intent.” When considering the age structure of this community, there is an estimated fatality rate of between 1.2 percent and 9.3 percent among infected people, assuming 10 percent of hospitalized cases result in a fatality. Fatality rates could be even higher due to the limited medical care available in the region. The Rohingya refugees require assistance and preparation to combat a COVID-190 outbreak.

Just when they had seemed to escape genocide, the Rohingya refugees are now left vulnerable to COVID-19. Some evidence indicates that one in four Rohingya refugees show symptoms of COVID-19. It is unfortunately unrealistic to expect doctors, nurses, and healthcare workers from around the world to be available for aiding refugee camps given the large international demand for healthcare workers. Many of the isolation practices suggested for the Rohingya refugee camps are dependent on mass testing, which creates more difficulties due to the worldwide shortage of COVID-19 testing equipment.

Although the Bangladeshi people welcomed Rohingyans in 2017, tensions between the two groups have gradually emerged. The Rohingya people have been blamed for decreasing wages in the region, damaging the natural land, and attracting aid that ignores the issues of locals. Many people in Bangladesh now attribute the spread of COVID-19 to Rohingya camps. Bangladeshis are focused on containing and treating the virus in their communities, limiting capabilities to assist Rohingyans. Thus, there is not much hope for local assistance. Not only are the Bangladeshis focused on preventing the pandemic in their communities, they indicate clear animosity towards the Rohingya refugees.

There are already some outbreak containment centers from previous cholera and diphtheria outbreaks in Bangladesh that can potentially be used to combat COVID-19, but most resources have had to be built from scratch. Utilization of standing centers has required extensive work from the government, UN agencies, and NGOs to be successfully repurposed for current needs. Even though current numbers report that there have only been 52 cases of COVID-19 in the Rohingya camps, Manish Kumar Agrawal, Bangladesh director of non-governmental organization International Rescue Committee, says that the numbers are skewed by limited testing within the camps. The UN, already assisting the Rohingya refugees, has donated 1,400 isolation beds and given money and supplies to 375,000 people thus far. These isolation beds are critical to COVID-19 recovery and also for conducting essential medical services, such as delivering babies, with COVID-positive patients. Education is also a critical part of prevention, and the efforts of humanitarian workers ensure that risks and preventative measures are understood. The WHO and NGOs have been working nonstop to educate the refugee populations and prepare for outbreaks, and thus far their efforts have paid off. Although there have been confirmed cases of COVID-19 in the refugee camps, the efforts to fight against the virus appear to be effective thus far, as shown by the relatively few cases seen in the camps.

The Rohingya refugee crisis is dismal, even without the complications of COVID-19. Nevertheless, the efforts of humanitarian workers, WHO, and NGOs appear to be making a significant difference.