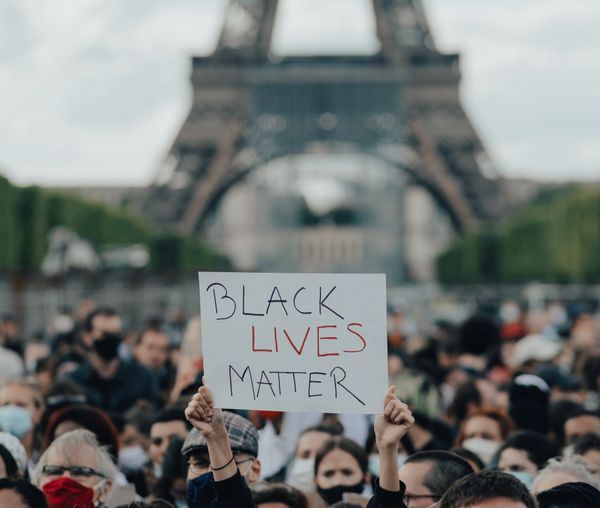 Across the world, people are rising up and protesting against generations of injustice, discrimination, and institutionalized practices that adversely affect marginalized communities. After the death of George Floyd in the United States, the Black Lives Matter movement gained support far beyond America’s borders. In France as well, people are joining American voices and calling for equality in their own country. Recently, French protesters took to the streets and social media platforms, exposing the harsh realities of being a minority in a nation that prides itself on its policies of unwavering universalism.

France’s “color-blind” approach to public policy is a modern manifestation of the traditions of universalism deeply rooted in the French history. French universalism can be traced back to the nation’s relationship with the Church in the Middle Ages and the later rise of linguistic universalism. The French belief in universalism stemmed from the idea that human nature is not influenced by cultural distinctions or historical variations. It is an ideal intended to unite all French citizens under a single French identity, regardless of country of origin or ancestral roots. The values of equality under law and secularism–key pillars of French history–are reflected in modern public policy. Rather than implementing policies that would directly address minority communities, the government chooses to implement policies guided by geographic and socioeconomic factors, with the goal of improving lives in all regions and neighborhoods.

Examples of this approach exist in various sectors of French society. In 2001, Paris Institute of Political Studies enacted an admissions program that focused on increasing access to the prestigious institution based on geographic determinants. The entry process was adapted for students at 100 high schools within priority education and low income zones. This program, despite being met with some resistance from those who viewed the program as reflective of the American system of race-based affirmative action, is representative of the French approach to addressing economic needs. Rather than explicitly directing policy initiatives at specific minorities and racial groups, French policymakers focus their attention and efforts on geographic areas. The concentrated nature of low-income residents in particular neighborhoods enables the policymakers to address concrete economic needs without referring to race or ethnicity.

Basing public policies on socio-economic rather than racial factors, the French approach stands in stark contrast to the approach of the United States, where race is a prominent topic both within communities and in the larger political sphere. Recent events, however, have led to the closer examination of France’s supposed “color-blindness” by researchers and activists who are delving deeper into its origins and beginning to question its implications.

In France, the concept of race is not just overlooked in public policy, it is considered somewhat taboo, and for many, a frightening reminder of the horrors of the Holocaust and Nazi Germany. Identity politics and the labeling or differentiating of citizens based on racial or ethnic background is a sensitive practice that calls to mind the division and turmoil of previous decades.

In fact, the National Assembly voted unanimously in 2018 to remove the word “race” from the constitution after arguing that the term was outdated. The constitution now reads: “France is an indivisible, secular, democratic, and social Republic. It ensures equality before the law for all citizens, without distinction of sex, origin, or religion,” removing the word “race” from its former place between the words “origin” and “religion.”

This taboo is also manifested by the French aversion to collecting racial and ethnic data. Throughout France’s extensive history of immigration, thousands of people immigrated to the country, with the first North African migrant workers coming to France in 1871. The number of immigrants continued to rise, sharply increasing following World War II. Immigrants filled employment gaps and reshaped France into a multiethnic mosaic of cultures, races, and traditions. Despite the multiethnic makeup of the country, politicians have steered clear of “race conscious” policy. A 1978 law banned the collection and computerization of racial data, leaving the nation without concrete statistics on race or ethnicity. The law is reflective of the government’s desire to avoid using race as a means of differentiating between individuals and to avoid calling to mind a bitter and scarring time in the nation’s history.

Private studies have been conducted about the current racial breakdown of French citizens, yet the results are largely ambiguous. In 2008, Louis-Georges Tin, a founder of the Conseil Représentatif des Associations (CRAN), wrote, “No one in France can say how many Blacks live in the country. A wide range of unofficial statistics circulate, and the numbers range between one million and six million.”  Additionally, due to the lack of accurate racial data, extreme-right wing politicians have capitalized on the ambiguity, inflating the number of Muslims residing in France and fanning the flames of xenophobic sentiment and anti-immigrant rhetoric. Politicians used such tactics to spread fear about terrorism and mass immigration, two issues at the center of French policy making. More recently, the lack of racial data collection has left citizens of France in the dark about the rates at which people of color are stopped and searched by law enforcement, rates of workplace and housing discrimation, and rates of death due to COVID-19.

The COVID-19 pandemic has highlighted the impact of France’s lack of racial data. While data in other countries show that nonwhite people appear to be at a higher risk of contracting and dying from the virus, France does not have any statistics that reveal COVID-19’s impact on particular racial groups. Authorities did acknowledge the severity of the virus in Seine-Saint-Denis, one of France’s poorest regions, yet “they avoided looking at it in racial terms,” said Pap Ndiaye, a historian and Black studies academic at Paris Institute of Political Studies.

Diverging from the Universalist Tradition

Ironically, the “color-blind” policies of the French government intended to avoid racial disparities are not without social repercussions. Despite the absence of government statistics on race or explicit race-conscious policies, more than 80% of respondents in a recent poll conducted in Seine-Saint-Denis said they attribute race or ethnicity to the discrimination they face when dealing with police or when seeking employment. Those who would like to change the “color-blind” approach to policy note that, although there is a vast quantity of anti-discrimation laws in place within France, the lack of concrete racial data inhibits tangible change for communities of color. The absence of racial data makes it difficult to identify problem areas as well as to measure progress or regression since there is no benchmark of comparison.

Activists and politicians are now calling for a radical shift in public policy in order to adequately address racial disparities and injustices within the nation. Sibeth Ndiaye, a spokeswoman for the French government, is one such figure. She suggests that the collection of racial data would enable policymakers to “measure and look at reality as it is.” This line of thinking diverges from the traditionally universalist mindset of French politicians and represents the emerging idea that the current approach is outdated and does not adequately address the needs of minority populations.

The word “race” is not found in French legislation or on official documents, yet many racial justice advocates are calling for the acknowledgement of racism within France. “Race may not exist, but racism still does, and it kills,” said Emilia Roig, the founder of the Center for Intersectional Justice. The sentiment is shared by the waves of protesters who took to the streets in June 2020, calling for the country to recognize the cracks in the universalist “myth,” one that claims the Republic is immune to ethnic disparities. Social media and large protests have proven powerful tools in addressing race in ways that French policies have not. Younger generations of Black and Muslim residents are urging for a new model that would address race and the role it plays in economic, political, and social disparities in the nation. Christiane Taubira, the first Black woman to serve as the justice minister in France from 2012 to 2016, argues that “structural discrimination” has created obstacles for nonwhite minorities, inhibiting their ability to find stable footing in France.

Studies regarding French employment (conducted without the use of official data) revealed that job applicants with obviously North African or African names were less likely to get called in to interview for a position than applicants with traditionally French names. Another study conducted about policing in France revealed that Black and North African youths were far more likely to be stopped and searched by police. Luc Pechangou, a young Black man who lives in the neighborhood of Bobigny, spoke of this reality at an anti-racism rally in June. “But we, as Blacks, have to worry every day. People look at us suspiciously. They ask us what we’re doing. When I take public transportation, I have to show what’s in my backpack. It’s not right to live like that.”

Across France, younger generations, disillusioned by the universalist myth, are beginning to speak out, urging French officials to re-examine their approach to racial policy to better fit the current climate, directly addressing nuanced racial issues pervading communities. They argue that changes must be made and their struggles made visible, so that the revered French values of liberté, fraternité, and equalité truly apply to all.