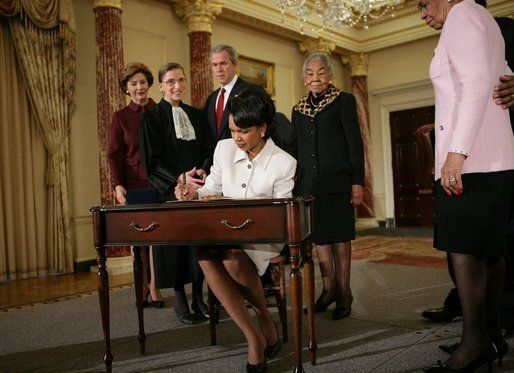 Change of Management: Reflections on the State of US Foreign Policy

An interview with Condoleezza Rice. Originally published in the HIR Fall 2013 Issue.

CONDOLEEZZA RICE served as the 66th United States Secretary of State under President George W. Bush. During her tenure, she championed a policy of "transformational diplomacy." Through initiatives such as reforming American diplomats' skill sets and increasing the State Department's oversight of foreign aid, the policy promoted the expansion of democratic governments around the world. Rice is currently a Professor of Political Science at Stanford University, the Stanford Graduate School of Business, and the Thomas and Barbara Stephenson Senior Fellow on Public Policy at the Hoover Institution.

During the Bush Administration, we had numerous foreign policy achievements that helped advance freedom and democracy as well as champion the furthering of global health initiatives in Africa. For example, I was personally delighted when the President's Emergency Plan For AIDS Relief came to fruition as the single largest monetary contribution from a foreign power to address the AIDS epidemic in Africa. We also created institutions in order to advance and protect the education and advancement of women across the globe.

More specifically, the Millennium Challenge Corporation (MCC) has been paramount in promoting good governance in Africa by linking development funds to building sustainable infrastructure—social, political, and economic—for its citizens. Success stories, such as Lesotho, stand as an incentive for neighboring states to follow suit. I am proud that the Bush administration was able to enact policies that demonstrated its firm belief in the importance of standing for freedom, democracy, and good governance.

My biggest regret was the failure to get comprehensive immigration reform passed in 2007. Though we had Senator McCain, Senator Kennedy, and President Bush all in support of the bill, we were all disappointed that we couldn't get it passed.

Who was your most challenging international counterpart to work with and what was your strategy for dealing with them and winning negotiations? Or, did you face more constraints from within the US administration?

As a Soviet specialist, I was particularly interested from both a professional and personal perspective in working with Putin in a post Cold War environment. Our two countries had been through a lot and we had a great opportunity at thawing our relationship.

With any bilateral rapport, states come to the table with different norms, interests and goals. Having an understanding of the Russian language and culture was important to working closely with Putin, especially during the Georgian crisis.

With only four to eight years in office, do you think it is difficult for the US Secretary of State to lay down blueprints for long-lasting change in international relations? To what degree do you think former statesman should take credit or blame for events that may have occurred after their term in office ended?

Serving is much more difficult than just looking from the outside. Foreign policy is on a solid trajectory grounded from the hard work of former administration officials and then passed on to the next administration. It is quite hard to uproot or change the direction of policies or agreements that have been negotiated and put into place for decades. Understanding this framework gives the Secretary of State the ability to see what has worked (or not worked) in the past in managing the crisis du jour. The Secretary of State acts as a sort of inbox to the world in solving crises and answering the needs of countries that may not be as fortunate as the United States.

How can the United States best adapt to the continuously changing array of issues and opinions facing it, whether it is growing concern that the United States is losing its position of eminence in global affairs, changing worldviews on the acceptability of foreign intervention, the development of cyber-terrorism, or something else entirely?

The US government needs to be prepared to accept change and to stay in line with technological advances. In today’s world, the pace of globalization has quickened and everyone has a voice because of the internet. The creation of the internet and the implementation of social media have vastly changed the way in which governments across the world function and communicate with their populations. Governments should use these tools to adapt to changing public opinions and in responding to crises.

What is the biggest misconception that the public has about the role or influence of the US Secretary of State?

The role of Secretary of State is well known for its importance in American foreign policy and its role within the international balance of power. However, the Secretary also manages a huge infrastructure within the United States as well as thousands of diplomats and posts abroad. Because of this massive reach, the position can also consume, in essence, your identity. I remember walking down the hallway and hearing: "S wants this, S wants that." And then I realized that I was "S."