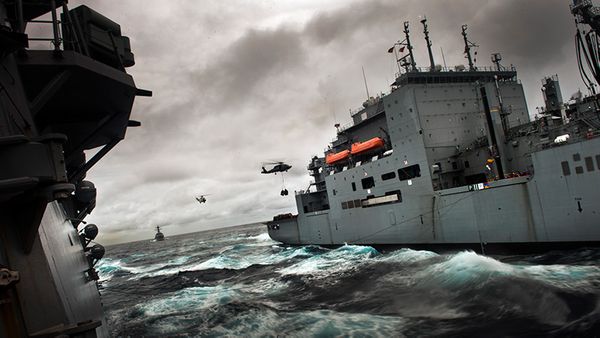 Belt and Road and Sea: Chinese Expansion in the Modern Era

Joshua Fowler specializes in Chinese infrastructure investment and trade in East Africa and South Asia. He is a former Visiting Researcher at the United States Air Force Academy and served with the International Trade Administration at the U.S. Embassy in Beijing.

The South China Sea and the Belt and Road Initiative (BRI) are two highly contentious topics at the heart of US-China affairs. Many analysts evaluate them independently: the South China Sea revolves around island-building and military infrastructure in the Spratly and Paracel Islands, while BRI engages with infrastructure investment and trade throughout Asia and Africa. However, there is more than meets the eye with China’s prominent foreign policy initiatives. Historically, the South China Sea played an important role in China’s ancient Silk Road trade. Merchant trading vessels sailed from China’s eastern shore to deliver goods to markets around the Red Sea, Persian Gulf, and Indian Ocean.

With the launch of BRI, the South China Sea has once again occupied a central role in transpacific relations. The region boasts the busiest shipping routes in the world, which will continue to grow as China strengthens trade with partners in Europe, Africa, and South Asia. China’s president Xi Jinping launched BRI in 2013; construction on military infrastructure in the South China Sea’s Spratly Islands began shortly after in 2014.

Moreover, the initiatives have a shared history in the Second Sino-Japanese War in the leadup to World War II. Japanese military strategy at the time revolved around the South China Sea: Emperor Hirohito planned to surround China and isolate it. China imported oil from the East Indies and Persian Gulf until 1949, making the South China Sea a critical fuel and military supply route for the Chinese economy. By taking control of Chinese ports, French Indochina (Today’s Cambodia, Vietnam, Laos, and Myanmar), and the Dutch East Indies, Japan forced China to suffer fuel shortages and severe famines in certain regions. The encirclement strategy also cut off the country’s oil and military supply route along the Burma Road in 1942, making the unmaintained Xinjiang province the only way into China. Soon, inflation, malnutrition, and anti-government sentiment were rampant—a legacy that has left China fearful of encirclement to this day. As a result, China continues to reference the Second Sino-Japanese War as the culminating event in the Century of Humiliation, an era that began with European aggression in the Opium Wars.

Today, BRI is strengthening routes through Kazakhstan, Myanmar, and Pakistan, providing options should Chinese ports be constrained in any capacity. China is also building a railway and pipeline along the iconic Burma Road, installing energy pipelines through Central and South Asia, and establishing rail linkages between Western China and Southern Pakistan. China’s efforts in the South China Sea, by contrast, are about protecting China’s southern flank, including the historical and critical supply routes through Southeast Asia.

How might China’s actions in the South China Sea be a model for BRI? For any initiative by an authoritarian government, strategic communication and narrative-crafting are key. China followed a specific progression on communication in the South China Sea: the initial narrative focused on a priority to protect the livelihoods of citizens living on remote islands. Over time, the narrative became about providing the region with storm and weather warning systems. And today, we see more militant messaging with the deployment of SA-6 missiles and coast guard frigates.

Djibouti, a key BRI proponent and one of the most indebted countries to China, saw a very similar progression. China’s modern engagement with the East African nation began in earnest with the financing and construction of the Addis-Ababa-Djibouti Railway beginning in 2011. While the relationship originally began with the stated goals of international trade and infrastructure investment, just two years later China proposed its first overseas military base in Djibouti. China initially branded the overseas installation as a support facility without capacity for combat operations. But gradually, the facility developed into a fully operational military facility, including live-round combat simulations.

We are starting to see the same paradigm exported all over the developing world. In the eyes of China, its efforts in the South China Sea have been a success. It successfully implemented three airfields in the Spratly Islands in 2016, exploits and surveys oil reserves in Vietnam’s exclusive economic zones, and secures access to prized fishing waters. If China can get the same results in other areas without international censure, it will. And if the South China Sea is any model for BRI’s progression, the United States and her allies should expect more Chinese overseas military installations, and an increased capability to project power.