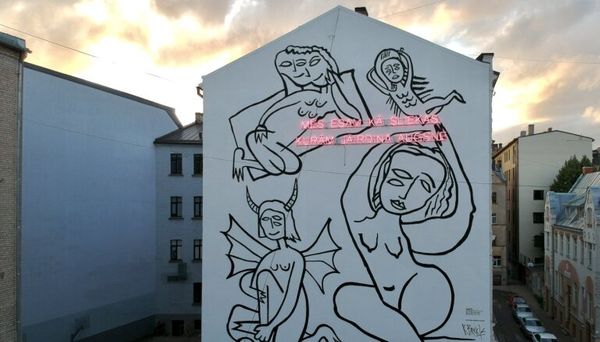 Earthworms and Breasts: What Controversial Art Reveals About Political Polarization in Latvia

In Latvia, where elements of post-Sovietism continuously creep into public life, art has become a symbol of defiance. This August, a mural by the controversial artist and Latvian Academy of Art professor Kristians Brekte debuted in Riga, Latvia’s capital, depicting drawings of four women and pointing to the innocence and curiosity of children. A tribute to the legendary Latvian artist Džemma Skulme, the mural sparking inspiration for bridging the gap between art and civil society in a transgenerational context where art is free to reign in all of its contemporary and political forms.

Then, thousands of signatures for the mural's removal started pouring in.

On September 29, the Latvian police launched a criminal investigation into Brekte's alleged portrayal of “child pornography” and incitement of “sexual violence” in his artwork. According to Article 166 of the Criminal Law, Brekte could face up to three years in prison for his mural, becoming the first artist in post-1991 Latvia to face substantial criminal proceedings driven by political grievances. The controversey has been enflamed by the depiction of silhouettes of naked women with a glowing quote from Skulme—"We are all earthworms who must dig through the ground”—a pledge to uphold a healthy civil society by constantly probing uncomfortable truths and contributing to societal good.

Lawyers, conservative activists, and editors from right-leaning publications publicly called for the removal of Brekte's work, citing “non-traditional values” and “elements of pornography” as the triggers for their sharp response. The representation of a naked woman’s body—seen as a purely pornographic depiction by Latvia's traditionalists—caused an uproar on social media. In the showdown that ensued, several prominent members of the Latvian intelligentsia and civil society vehemently supported Brekte and defended artistic freedom of expression in widely circulated statements on social media. Latvian President Egils Levits also expressed his concerns about the debate over deteriorating space for healthy political discourse and freedom of speech during a meeting with prominent Latvian theatre director Alvis Hermanis.

While Latvia is often considered a consolidated democracy, it still trails behind its EU counterparts in several democratic markers. Latvia remains one of the least accepting nations of the LGBTQ+ community in the EU; it is also experiencing democratic backsliding similar to that in the growing number of self-proclaimed illiberal states in Central and Eastern Europe, albeit less radically so. The state of free press and artistic expression, on the other hand, has largely improved since the corrupt days of the mid-2000s, a time filled with politically-motivated takeovers of media companies by the country's top oligarchs. However, looming political divides have once again sparked the question of the role of the media and the creative intelligentsia in young democracies like Latvia, and the future of the fourth estate amid quasi-authoritarian takeovers across the region.

Throughout its history, Latvian society—largely composed of native Latvians and Russians—has been notoriously polarized. While Latvians have yet to overcome the ethnic divides that have plagued the political landscape for the last 30 years, a more alarming phenomenon, partly driven by the surge in populist movements across the globe in 2015, has crept into national politics. Captured in the electoral successes of the Polish Law and Justice party (PiS) and the Hungarian Fidesz, the populist zeitgeist reached Latvia in 2018, shortly before the parliamentary elections that saw the Kam Pieder Valsts? (KPV), translated as Who Owns the State?, reaching national headlines with the party's populist promises and controversies sparked in the pre-election period. Threats to journalists and the national public media, as well as calls to restore traditional values, existed before the rise of the KPV, but in 2018, the party brought this platform to the political arena in the form of a cohesive political program.

The KPV was criticized for attacking journalists and NGOs in the media, and it occasionally expressed the need to bring cases against prominent investigative journalists it deemed “undesirable” to court. The party’s plans for the new government included appointing six non-elected ministers outside of the parliament, as well as expanding prime ministerial powers—both extremely dangerous constitutional precedents. Party members have also threatened to fire journalists deemed “too critical” of the party and its platform.

Seen as the embodiment of the establishment and the antithesis to a traditionalist society, the most liberal groups of civil society—journalists, artists, directors of prominent NGOs, and lawyers—have long been the scapegoats for modern populists across Europe. In Latvia, political and cultural populism have become inextricable, as the creative sector of society, particularly journalists in 2018 and now artists as representatives of the progressive post-1991 intelligentsia, have become the primary target for the country's young populists. Taking a look at Brekte's mural within the larger context of a populist revival, the issue most Latvians are faced with is not a simple political divide along traditionalist and progressive lines. A more encompassing explanation may be an ever-growing political anxiety as a result of the self-proclaimed culture war that Latvia’s right-wing is waging in a society that is pushing for a progressive transition.

Riga, the city in which the mural appeared overnight, is considered by scholars to be a bastion of progressive values in Latvia. In 2020, the liberal and pro-EU APP (Attīstībai/Par!/Progresīvie) alliance was elected to the city council, and APP member Mārtiņš Staķis assumed office as the mayor of Riga. For the first time, a liberal coalition would be in charge of the political core of the country, signalling to many that decades of corrupt and nepotistic rule by the opposition party Saskaņa (Harmony) would finally come to an end.

The political artery of the country runs through Riga. Most progressive reforms tend to first sprout in the capital before disseminating to surrounding regions. In 2019, Saeima—the national legislature—voted overwhelmingly in support of an act that would end the application of the status of “non-citizens” to children born after 2020. A legal phenomenon only found in Latvia and Estonia, the regulation designates those who immigrated to the Soviet-occupied Latvia from the other fourteen republics of the USSR following 1940 as “non-citizens,” effectively putting many ethnic Russians in legal limbo and disenfranchising them from voting in national elections. Similarly, this year the Constitutional Court of Latvia ruled that same-sex partners are entitled to the same parental leave benefits as heterosexual couples, a landmark decision in a socially conservative state. Since the rise of the APP to power in Riga, the city has also pioneered several sustainable city planning and mobility reforms, taking after the experience of several Western European cities, and passed bills increasing social welfare benefits for the increasingly diverse local population.

For years, Riga has been a legislative and civil battleground between the most radical parts of Latvian society. Now, the city's position within the national context as the progressive center of the nation has been undermined by the growing discourse about the fundamentals of artistic expression and freedom. Those who called for the removal of the mural are generally affiliated either with Latvia’s largest nationalist-conservative party, NA (Nacionālā Apvienība), or with the slowly rising tide of small right-wing populist parties, namely Stabilitātei! (For Stability!), which have sprung up in the past year, following an electoral defeat in 2018 and recent splits in previous parties' membership. It is not surprising that a large fraction of Latvians still vote for conservative and right-wing parties, and now right-wing populists, who have placed themselves on the frontlines of the self-proclaimed culture war against progressive values, vaccine mandates, and “degenerate” art.

What the Future Holds

While the response to Brekte's work may signal a dangerous precedent for artistic freedoms in Latvia, it is by no means a radical exception in the highly-progressive environment of Latvia's contemporary art culture. Right-wing activists have criticized Latvia's young artists for their representation of issues pertaining to social justice, marginalized groups, and identity politics, drawing parallels with the socialist realism movement in the Soviet Union during the 1930s under Stalin. However these criticisms have been largely limited to repeating conservative tropes and buzzwords in an attempt to undermine open discussions about the evolution of Latvian art at a time when the country's hunger for more modern portrayals is growing rapidly.

Exploiting growing divides allows populist parties to score extremely well in national elections. However, the case of Latvia still remains a rather unconvincing one. Even with a fluctuating but omnipresent populist force, it is unlikely that Stabilitātei! or any other political party will succeed in next year's parliamentary elections. With the crumbling of KPV post-2018, populist parties are now growing cautious about their prospects of gaining power and, more importantly, maintaining it if elected to the legislature. Popular opinion and electoral results in a politically divided country like Latvia will almost always guarantee that a rainbow coalition, rather than a consolidated one, will remain in power. Latvian voters have clearly established the country's many centre-right and centre-left parties as their prime electoral preferences for years, stalling any prospects of a marginal radical party suddenly usurping power.

However, Latvians will still need to remain vigilant. As shown by the experiences of their neighbors, populist takeovers do not happen in a matter of days, weeks, or months. They often start with an insigated conflict between political groups, a hostile media takeover, or an antidemocratic judicial reform.

Art, it seems, has become a new venue for populists to build their power, proliferate discord, and sow the same divisions that once brought Poland's and Hungary's civil society to its knees. If that kind of strategy were to result in an electoral victory, the populist handbook might find itself in need of an update.

Ricards Umbrasko is an Executive Content Editor at the HIR. Born and raised in Latvia, he is interested in Eastern European politics, culture, civil society, and social inequality in the region.