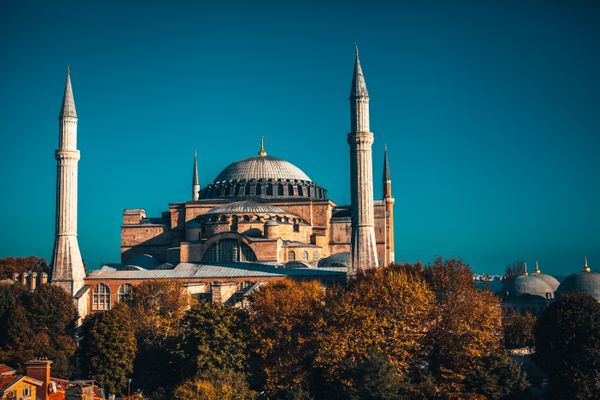 On paper, Greece and Turkey are allies: members of the NATO alliance dedicated to collective security. A snapshot of the relationship’s on-the-ground reality, however, shows discord, disunity, and dissent. The two countries harbor a great deal of resentment toward one another, born of deep and recent histories of diplomatic and cultural battles. Even now, Greece and Turkey are engaged in a multitude of geopolitical disputes over issues ranging from maritime boundaries in the Eastern Mediterranean to competing spheres of influence on the island of Cyprus.

While these territorial issues remain largely intractable, unique in the visceral reactions it has provoked among the Greek and Turkish publics is a recent cultural flashpoint: last July’s conversion of Istanbul’s Hagia Sophia from a religiously unaffiliated museum to a Muslim mosque. Originally constructed nearly 1500 years ago by Byzantine Emperor Justinian as the central cathedral of the Greek Orthodox Church, the building once served as the cultural and religious centerpiece of the vibrant city of Constantinople, capital of the Byzantine Empire. Even today, the structure is to many Greeks and Orthodox Christians a symbol of immense significance. A testament to the majesty of Greek culture and history going back to the Byzantine era, the Hagia Sophia lives powerfully within the collective memory of the Greek people. To some Greeks, the Hagia Sophia signifies Greek identity itself.

Public and official backlash to the conversion was immediate. Al Jazeera reported the tolling of church bells across Greece and a public burning of the Turkish flag in Thessaloniki in reaction to Turkey’s decision. The Greek government chimed in forcefully as well, with Prime Minister Kyriakos Mitsotakis condemning Turkey’s decision as an “affront to civilization of the 21st century.” A poll taken shortly after the conversion found that 86 percent of Greeks believe the Hagia Sophia ought to have remained a museum. The Greek public views Turkey with hostility on the recent geopolitical disputes as well: 81 percent see Turkey’s actions in the Mediterranean as a threat to regional stability. This near-unanimity among the Greek public with regard to Turkey’s political direction underscores the visceral feelings evoked by the Hagia Sophia’s conversion.

More than an isolated point of disagreement, the Hagia Sophia drama is an important case study in a broader narrative of the continuing animosity between Greece and Turkey. The countries’ disputes are manifold and deep-rooted, born of hundreds of years of conflict and distrust that have not subsided despite NATO’s best efforts to pacify the relationship. In many ways, the confrontation over the Hagia Sophia and Greek-Turkish disputes more broadly exemplify a unique challenge to NATO: the alliance’s limitations when it comes to controlling such internal strife.

The Fraught History of Greek-Turkish Relations

The Hagia Sophia’s many conversions—from cathedral, to mosque, to museum, and back to mosque—represent the long, conflictual history of Greece and Turkey’s relationship, a history that explains much of the countries’ present-day discord.

The Hagia Sophia became a mosque for the first time in 1453, when the Ottoman forces of Sultan Mehmed conquered Constantinople, reestablishing it as the city of Istanbul. The conquest ushered in nearly four centuries of Ottoman control over Greece. It was not the Ottoman occupation, however, that created the historical groundwork for modern-day tensions—Greek Christians experienced relatively high degrees of religious toleration and autonomy under the Empire. Greek mobilization against the Ottomans up until the late 18th century was sporadic and small-scale, a sign that many Greeks had accepted Ottoman rule.

The relationship between Greece and the Ottoman state—and later its successor, the Turkish Republic—turned towards animosity and grievance with the Greek War of Independence, which began in 1821. During this rebellion, which culminated in the establishment of an independent Greek state in 1832, both sides massacred civilians perceived to be affiliated with enemy forces. Turkish soldiers killed thousands of Greeks on the island of Chios and executed Greek political and religious elites while Greek forces slaughtered up to 20,000 Turkish Muslims living on the Peloponnese, among other wartime atrocities. The bloodiness of the struggle meant the Greek state emerged wary of Turkey. Irredentist factions pushing for the reconquest of ancestral Greek lands on the Ottoman-controlled Anatolian peninsula were influential in the early Republic, and a weakened Ottoman state was slighted by its territorial loss and hostile to the newly independent Greece.

The final days of the Ottoman Empire during and after World War I bore witness to the “Greek Genocide,” a systematic ethnic cleansing campaign against the Pontic Greeks living in Anatolia. Thousands were subject to forced labor by the Ottoman government, and by the 1923 dissolution of the Ottoman Empire, over 200,000 Greeks had died. The immediate period after World War I was marked by the Greco-Turkish War. This bloody military conflict involved Greek massacres of Turkish civilians and, at its end, a victory by the new Turkish Republic in which the Greek army was destroyed and the Greek-occupied city of Izmir was torched, killing tens of thousands and ending the Greek dream of restoring its ancient sphere of control. The peace negotiations between the two states created yet another indignity: the Treaty of Lausanne forced the deportations of Greece-dwelling Turks to Turkey and of Turkey-dwelling Greeks to Greece. The relationship between the modern Turkish and Greek states was thus born out of rebellion, conflict, and ethnic violence.

These two centuries of unrest, punctuated by violent flare-ups, had important effects on the formation of Greek and Turkish national identities in relation to one another. Greece emerged with hardened attitudes against Turkey: many constructivist scholars of international relations argue that Greek self-perception as modern and civilized heirs to the cradle of democracy relies upon a demonization of “barbaric” Turks responsible for heinous historical crimes and the destruction of the ancestral Greece dominion. Similarly, these scholars assert that Turkey self-identifies as a fallen great power, wronged by a weaker Greece and dedicated to asserting national power vis-à-vis its rival.

Present Dynamics across the Aegean

Greek and Turkish historical memory and identity construction rear their heads when it comes to present-day tensions. The Hagia Sophia controversy can be understood through a historical lens as a Turkish assertion of sovereignty coupled with Greek outrage over wounded national pride. But present security issues are also historically constructed: the current conflict over the island of Cyprus was born of the 1974 near-war between Greece and Turkey that partitioned the island into a Turkish half and an independent, ethnically Greek half. Similarly, the present issue of maritime boundaries—Greece and Turkey disagree over the borders of territorial waters, Exclusive Economic Zones, and rights to gas reserves in the Aegean—is, at its heart, a debate over national sovereignty and relative national power in Greece and Turkey’s shared sea.

These issues have been exacerbated by the nationalist turn in Turkish foreign policy. Turkish President Recep Tayyip Erdoğan’s administration has pursued a more assertive military posture in the Eastern Mediterranean and Middle East as part of a push for greater power and prestige in the international system. Invoking regional historical memories, he has attempted to rehabilitate the Ottoman era as a golden age of Turkish prestige in an effort to justify military adventurism in historically Ottoman territories such as Iraq and Syria. Erdoğan’s nationalism has inflamed tensions with Greece across the board by playing on historical antagonisms across the Aegean—such as the controversy over the Hagia Sophia and attempts to expand national waters at Greece’s expense. Greece, on the other hand, has projected its own sovereignty in taking hardline stances on these territorial issues.

The Challenge to NATO

The fact that these diplomatic and security issues touch at the heart of historical enmities place them in a different category from other geopolitical disputes. Greek-Turkish disputes over Cyprus, the Aegean, and the Hagia Sophia cannot be understood simply in realist geopolitical terms. Rather, historical enmities between Greece and Turkey have shaped both countries’ motivations and made rapprochement less likely to succeed, as the disputes at hand relate intimately to national identity construction among both elites and the public.

Given the decidedly cultural elements at play in the Greek-Turkish conflict, the question of NATO’s role in the relationship, as both countries are members of the alliance and are nominally dedicated to each other’s security, becomes an interesting one. The original goal of Greece and Turkey’s incorporation into NATO in 1952 was to “pacify their behavior toward each other.” But the underlying antagonism between Greece and Turkey is older and deeper than their connection through NATO. Under NATO, the two countries have experienced several near-misses that almost erupted into conflict, namely the 1974 Cyprus crisis and thousands of aerial confrontations over violations of airspace. Though NATO has so far averted a hot war, Turkey’s turn away from the West has raised fears among the alliance that traditional, institutionalized de-escalation measures within the alliance will become ineffective, as a Turkey hedging toward Russia and away from Europe has less incentive to concede to the interests of NATO or EU power brokers.

Many scholars believe the recent flare-ups of Greek-Turkish tensions have paralyzed NATO. Decreased leverage over Turkey has made European pressure less of an influence in the Turkish halls of power, shown by the ratcheting of tensions despite near-universal European outcry against recent political decisions.

More broadly, the ethno-cultural antagonisms between Greece and Turkey make any effort to use traditional alliance structures in a de-escalatory manner more difficult. If Greece and Turkey’s antagonisms are driven not only by realpolitik calculations but by the quest to assert national identity in opposition to the other, both sides will likely be more assertive and less willing to lose face by conceding on certain issues. Making concessions that would facilitate peace but require allowing a “win” for the other side might be unacceptable to political leaders fueled by culturally nationalist domestic audiences. On the other hand, leaders who choose to throw fuel on the fire of cultural and geopolitical disputes may be rewarded with increased support from publics influenced by historical memory and a desire to assert national heritage.

The recent conflicts over the Hagia Sophia, Cyprus, and the Mediterranean are just the latest in a long string of cultural and geopolitical salvos between Greece and Turkey. National self-construction and public pressure have fueled hostile foreign policies almost unprecedented between NATO allies. In looking toward a solution, we must recognize that alliance membership is not a silver bullet that unifies states. Rather, history, collective memory, and the formation of national identity in the international sphere are important factors at play in determining state behavior. Understanding Greek-Turkish relations—and international relations and alliance politics more broadly—requires not only looking at the current international chess board but also appreciating the complexities of the historical relationships that created it.

Sam Meacham is a staff writer for the HIR. He is interested in conflict and conflict resolution, political economy, and economic development.