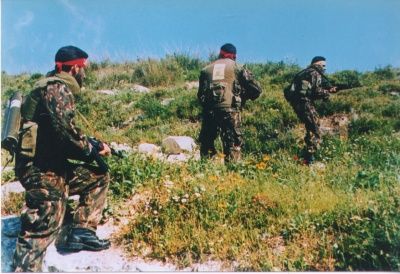 Our struggle with Israel stems from an ideological and historic understanding to the effect that this Zionist entity is an aggressor in its development and formation and is existing on a land usurped at the cost of the rights of the Muslim people.

"And so our confrontation with this entity should end only when and after it has totally been eliminated from existence."

This excerpt from Hezbollah's manifesto, released on February 16, 1985, embodied the purpose of the group when it was founded in South Lebanon in 1982. The Iranian-backed Shi'ite militia has gained international attention since it began car bombing near Israeli-occupied buildings in the early 1980s in an effort to liberate South Lebanon from the Israeli occupying forces.

Over the past few years, however, Hezbollah has begun to develop a dual role. Formerly known only as a terrorist organization, the group might now more accurately be understood as something "larger than a party, yet smaller than a state," as it was described by Hussein Al-Shami, Hezbollah's head of social services.

The creation of Hezbollah has its roots in the 1970 expulsion of the Palestine Liberation Organization (PLO) from Jordan; it subsequently relocated in Lebanon. In an attempt to destroy the PLO, Israeli troops invaded Lebanon in 1982. Israel has since occupied a 15-kilometer strip of land in South Lebanon contiguous with the Israel-Lebanon border as a self-proclaimed security zone. Hezbollah emerged in the wake of the invasion in order to drive out the Israeli military forces.

Along with the Israel Defense Forces (IDF), Hezbollah had to contend with a Christian militia known as the South Lebanon Army (SLA), which had taken up residency in the south to help Israel maintain its security zone in South Lebanon. During the beginning months of the invasion in 1982, Israel was associated with several heinous acts that contributed to the Shi'ite uprising and ultimately to the formation of Hezbollah. Among these were the infamous massacres at the Sabra and Shatilla Palestinian refugee camps, where an Israeli-sanctioned operation by Lebanese Christians to uncover PLO operatives hiding in the camps culminated in the massacre of almost 1,000 refugees; the war deaths of 18,000 Lebanese civilians; and the attack on the Southern town of Nabatiyeh during Ashura, the most important Shi'ite religious holiday.

The Lebanese population, which had been relatively passive prior to the invasion, rose up in violent anger, forming a guerrilla group so powerful that Lebanon was given the unofficial title of "Israel's Vietnam."

Over the past 17 years, Hezbollah, also known as the Islamic Resistance, has gained its reputation as the primary military defender of South Lebanon. Its members have killed hundreds of civilians by driving cars loaded with explosives into buildings occupied by Israelis. They have set up roadside bombs to ambush IDF soldiers on their way into the South and have launched attacks on Northern Israel, sometimes provoked by Israeli aggression. Onse such case was the assault on Hezbollah guerillas camped near a UN base in Qana in April 1996, which resulted in the deaths of hundreds of Palestinian and Lebanese bystanders.

Amnesty International reports repeated attempts by Israeli forces to attack and threaten Lebanese civilians in order to force the Lebanese government to take a stance against Hezbollah, but these attempts usually resulted in even fiercer support for the resistance.

Since its birth in the early 1980s, Hezbollah has garnered increasing support from Lebanon's Muslim population.The organization has also had a powerful effect on Israeli public opinion. Over 1,000 Israeli soldiers have lost their lives in the fight against Lebanon, a loss that has sparked widespread disapproval of the military campaign as well as debate in the Israeli government over the feasibility of maintaining operations in South Lebanon.

Ironically, Hezbollah is also the primary factor preventing Israeli withdrawal; many Israelis fear that shelling of Northern Israel would continue post-withdrawal and that without the buffer zone Hezbollah would pose a military threat to Israel proper.

While Hezbollah has maintained its military face over the years, it has recently adopted a role unpublicized by the media: it has begun to orient itself toward community support and action. Because most of Hezbollah's members also carry on normal civilian lives, the organization has a vested interest in maintaining stability. The Lebanese civil war rendered the government incapable of supporting a large portion of the state. Hezbollah, which receives about US$ 100 million annually from Iran, has begun to use a portion of its funds to provide social services for the Shi'ite population in South Lebanon.

Over the past ten years, millions of dollars have been channeled toward the construction of hospitals, schools, orphanages, and other public service buildings. In the mid-1990s, several members of Hezbollah were elected to the Lebanese parliament. A Hezbollah radio station, television station, newspaper, and several internet sites have emerged. It appears that few facets of social activity in South Lebanon remain untouched by the Hezbollah.

For the moment, Hezbollah remains focused on expelling Israeli troops from the 15-kilometer strip of land in South Lebanon, but recent events suggest that this goal may in fact be realized in the near future. In early 1999, Ehud Barak, before being elected Prime Minister of Israel, called for withdrawal from Lebanon by June 2000. This promise, however, was contingent upon many factors, including the cooperation of Syria, which maintains sizeable forces in Lebanon, and of both the Israeli and Lebanese governments; Israel's willingness to abandon the "security zone"; and the influence of the Israeli public on the government. Hezbollah has not yet announced a post-withdrawal agenda. In fact, the closest it has come has been to affirm its intentions to "keep Israel guessing."

The only point on which the group has been unambivalent is its continued economic, social, and political role within Lebanon. As underscored by Deputy Secretary-General Naiim Qassem, "Hezbollah is here to stay. It is not just a political or military trend that will pass away when those circumstances [the Israeli occupation] end. Instead, it is a carrier of an Islamic principle which is impossible to eradicate."

One thing is clear: regardless of the consequences of the current talks, Hezbollah will maintain its presence in South Lebanon.